To take the fight to WSR and four-time title winner Turkington still requires a lot of effort, but the potential of the Infiniti, first seen in Scotland, is now turning into results.

It has similar dimensions to the 330i M Sport, although Moffat Sr says this wasn’t on the radar when the project was given the green light.

“When we looked at it, we thought it was better than the BMW,” he says. “We were pleased with the aero figures and we loved the engine position and the gearbox. We weren’t looking at the car because it was close to the BMW, though; we only ever looked at it on its own merits.”

The Infiniti has ripped up the track so far, thanks to the efforts of Sutton and Moffat Jr. Laser Tools is leading the Independent Teams Trophy standings and Sutton heads the chase for the Independent Trophy runners.

One curiosity, though, is the fact that the public can no longer buy a Q50 for the road, because Infiniti withdrew from Europe at the start of this year. The BTCC has rules about the age of the models competing, and the lifespan of any car is only five years since it was homologated and available on general sale – which is a process that Laser Tools Racing went through in January, right on the cusp of the time period when the Q50 was still a viable BTCC proposition.

Those BTCC rules are in place to mean that kit isn’t immediately redundant once the model isn’t in showrooms any more, and it means that the privately run teams can field older, therefore cheaper, machines.

“We were aware that the Q50 wouldn’t be sold after the start of 2020, but we got the homologation done, so it’s fine,” says Moffat Sr. “To be honest, five years is long enough for any car. After that, it’s going to be tired and it will need a change.”

With the work that Laser Tools and BMR have done in the background, there’s no chance of the Q50 feeling tired any time soon – and that could just prove the thorn in BMW’s side in the chase for 2020 honours.

Cars that pushed the BTCC rules

Holden SS Commodore, 1987-1988: The Group A regulations that dominated touring car racing in the 1980s were very different from those of today. If a car was created to those regulations and was homologated in any country, it could then be used around the world. That was what brought this V8-powered Holden monster, driven by Mike O’Brien, to British shores in 1987 and 1988. The Australian saloon was a real curio among the European heavy metal.

Ford Merkur XR4Ti, 1985-1986: Ford was aware of the importance of its cars’ sporting success in the 1980s, and knew that tin-top victories were crucial. When trying to dig the Sierra out of its jelly-mould reputation, it decided that a race programme was the way forward. The underpinnings of what would go on to become the iconic Ford Sierra RS Cosworth (and then the RS500) would be the American-imported Merkur, dubbed the XR4Ti. It was a mobile test bed good enough to take Andy Rouse to the title in 1985.

Faculty on the Factory Floor records full cohort of students

The smart route to electric vehicles 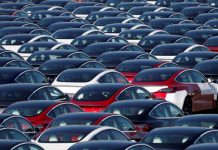