One horrific clip shows a guard nicknamed “SS” beating a stripped inmate as he screams in pain.

During the first clip, two humiliated prisoners are stripped down to their underwear and brought in front of uniformed officers.

In separate beatings, they are laid across tables and hit with truncheons at the notorious Yaroslavl IK-1 prison, north of Moscow.

According to independent newspaper Novaya Gazeta, who revealed the torture, he had been summoned for a body search procedure.

After refusing to go through with an invasive search, officers hold Bochorishvili down before beating him with a rubber truncheon.

During the horrifying footage, he is heard screaming “Enough” as he loses consciousness and collapses to the floor.

As he lies motionless, the guards scream: “Get up! Get on your feet, Bochorishvili!”

The footage dates back to April 2016, but has only now been published by Novaya Gazeta.

After the beating, Bochorishvili was left alone in a punishment cell but continued to suffer severe bleeding, Novaya Gazeta reports.

He was later moved to Rybinsk hospital on May 9 – but died that same month.

The second victim is named Andrei Ivanov, but has chosen to use a different identity.

According to Novaya Gazeta, the inmate – who is Muslim – had become upset during a search when his Koran was thrown on the floor.

Surrounded by a crowd of officers and wearing only underpants he argues to defend his rights under the penal code, before being brutally beaten by guards.

Sergey Efremov – nicknamed SS for his habit of beating prisoners in the ears – was believed to have been involved in torturing Bochorishvili, according to former inmates.

He was previously sentenced to a four year term for abuse of office in punishing prisoners, later reduced to three and a half years.

I’ll happily wait for a Covid jab but why is who gets it so random?

The footage emerged after officers at the jail were given suspended sentences in relation to previous allegations of torture, amid claims that authorities have been soft on prison brutality.

An appeal against the verdict concerning former jail staff Maxim Yablokov, Roman Onypa and Vladislav Pisarevsky has been sent by the foundation to European Court of Human Rights.

The jail’s former acting governor Dmitry Nikolaev – in charge at the time these videos were made – was acquitted in a previous torture case. 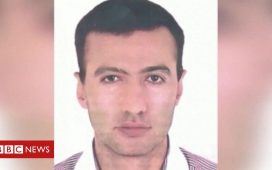