Honda has entered an agreement with Sony which will see the two Japanese giants work in conjunction to create electric vehicles.

The alliance between the two is formalised as Sony Honda Mobility Inc., and has been in the works for a while now. Back in March, we wrote that the agreement between the two was aimed to be finalised this year, and that it would see the vehicles produced by Honda in factories they already own and operate. Additionally, Honda’s role would be on the engineering of the mechanicals of the vehicle itself, while Sony would focus on the consumer’s engagement with the vehicle.

The press release Sony published confirming the partnership says Sony Honda Mobility “will aim to bring together Honda’s cutting-edge environmental and safety technologies, mobility development capabilities, vehicle body manufacturing technology and after-sales service management experience, with Sony’s expertise in the development and application of imaging, sensing, telecommunication, network and entertainment technologies, to realise a new generation of mobility and services for mobility that are closely aligned with users and the environment, and continue to evolve going forward.”

Sony and Honda intend to have the new company established “within 2022 and to begin the sale of EVs and provision of services for mobility in 2025.”

So, 2025 is when we can expect to see the first products of this joint venture. And, there is scope for it to produce motorcycles. Sure, Sony’s expertise comes from TVs, phones and video games, which are generally speaking more applicable to cars than bikes, but at the same time those expertise can become useful on two wheels, too.

That doesn’t mean a 150kW Sony Honda superbike will have a TV on the dash, but that dash might have cleaner functionality, and it might have efficient, clear voice recognition. That’s not to say, though, that Sony Honda is about to build a 200-horsepower race bike, but that point – as well as others to do with vehicle proximity sensing or bike-to-bike communications – is applicable to pretty much any kind of motorcycle.

With this joint venture, it is important to remember that Sony is a consumer brand. It makes things that people want to buy, rather than things which have the sole purpose of being technologically evolutionary. Honda, on the other hand, makes Fireblades and CRF450Rs and Formula One engines (albeit now renamed). These are not consumer products. If Honda was a consumer brand it would have made the Cub and stopped there. Not that CRF450Rs are unpopular, but they don’t sell as well as TVs.

With that in mind, it might be reasonable to suggest that the primary – if not the sole – function of Sony Honda Mobility will be to manufacture electric vehicles which are practical, and which people will want to buy in their thousands, and eventually hundreds of thousands. 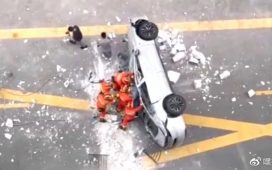