(Reuters Health) – Homemade kits used to train bystanders to step in and stop bleeding after a gunshot wound could save lives, a new report suggests.

St. Louis doctors came up with some ingenious adaptations to lower the price of training kits used to teach people how to stop severe bleeding that can cost a life, and describe their inner-city focused training program and tools in JAMA Surgery.

“We just ran into a wall after getting funding to teach the class,” said the report’s lead author, Dr. Erin Andrade, a research fellow at Washington University. “The commercially available trainer kit costs about $1,000. We had to figure out a way to do it inexpensively.

Instead of the expensive limb model included in the commercial kits, Andrade and her colleagues constructed one out of foam rollers, in which they made cuts that were painted red to simulate wounds, to which trainees could practice applying a tourniquet.

“We used pool noodles to teach people how to apply pressure,” Andrade said. “If you apply it correctly the hole in the center completely closes.”

The trainers also taught participants to put together the bandages and other materials needed to stop bleeding themselves, so they could carry supplies with them.

Each training kit, including limb model, gauze, gloves and other supplies costs about $25, Andrade and her colleagues write in their report.

The payoff can be huge. “The average ambulance response time is 7.7 minutes in urban areas in the United States, which is longer than the time it takes to bleed out from an arterial injury,” the researchers note. “Tourniquet use is associated with a 90 percent survival rate when placed before the onset of shock but only 20 percent when placed after shock’s onset.”

Andrade’s efforts are part of the “Stop the Bleed” campaign launched by the American College of Surgeons in 2015 to teach laypersons bleeding control techniques. Just as teaching members of the public to use portable defibrillators and CPR lets bystanders help someone in cardiac arrest until an ambulance arrives, the idea is that bystanders can also learn to stop severe bleeding before it’s too late.

A subset of the campaign, the Acute Bleeding Control program, focuses on training groups most at risk for experiencing gun violence, the authors note.

Andrade and her colleagues focused on inner city residents who are at risk for gun violence. “By learning how to react after a violent incident they can take over the situation and be empowered to change the narrative about violence,” she said.

As an illustration, Andrade points to the story of a girl who took the course while in juvenile detention. “Her brother was injured after she left – stabbed in the thigh,” Andrade said. “She was able to use the tourniquet she received and saved his life.”

Stop the Bleed training is “the CPR of the 21st century,” Andrade said. “It’s trauma first aid. It’s everything you need to know to stop life-threatening bleeding. With it, anyone can save a life.”

“They have used a novel approach and I think it’s a great adaptation of the current program,” said Dr. Raquel Forsythe, an assistant professor of surgery and critical care medicine and associate medical director of trauma surgery at the University of Pittsburgh Medical Center in Pennsylvania.

Forsythe applauded the development of an inexpensive training kit as well as a low-cost kit that trainees learned to put together on their own. “We’re talking about the people who are most at risk, but may not have the funds to purchase a kit,” Forsythe said. “A lower-cost easy-to-assemble option is a great innovation.” 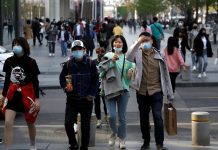 Coronavirus: Hospices warn they could close as virus hits fundraising

Am I in the at-risk category if I’ve had cancer? Dr Hilary answers your questions