When the illegal parties stack up, the polls slump, and Conservative MPs rebel, the refrain most often heard from Westminster is that the next general election is in the bag if his handlers will just “let Boris be Boris”.

The Prime Minister has a reputation – and an electoral record – of being so charismatic, charming, funny, and great at public speaking that he is voter Viagra, able to stiffen the softest Tory resolve into a state of firm, blue, rigidity.

What his addicts in the party have failed to realise is that permanent priapism is no fun at all, and that the best possible outcome is for that hardened intent to be spaffed up the wall. The structural support he creates is destined, indeed intended, to collapse.

Which is why his detractors, the Covid-bereaved, Keir Starmer, and the Labour Party alike, also want his handlers to just let Boris be Boris.

“Under no circumstances do we want Boris to be anyone else.”
(

There are two years until the next General Election. The PM could be forgiven for thinking he can yet turn the polls, which have consistently swung to Labour for more than a month now, back round.

But no government in British history has won 5 general elections in a row. The Tory request to remain in power until 2029 would be utterly unprecedented, if the electorate granted it.

And considering that is a year in which we might expect to see nuclear fusion, hydrogen boilers, and flying cars, never mind hypersonic nuclear missiles capable of travelling at a mile per second, there are a number of things that the Tories would need to demonstrate to get the gig.

1. They will need to surf the wave of scientific advancement. Instead, they’re led by someone who needed technology lessons from a lady who left her adulterous stockings in his marital kitchen bin.

If he can’t even pick his girlfriends more wisely, what hope do we have?
(

2. They will need to demonstrate the ‘Brexit bounce’. Short of handing out passport-blue spacehoppers decorated with the Queen’s coat of arms, this will not be forthcoming. Food costs more, imports cost more, exports cost more, and everyone who voted to get rid of EU migrants has since had cause to complain about a lack of lorry drivers, care staff, NHS workers, waiters and/or au pairs.

3. The average British family is going to lose around £2,000 a year as of April. Inflation is predicted to hit 5% annually and, to keep pace, we’d all need a pay rise of 7% before tax to cope with it. And we can’t all become HGV drivers, now can we?

4. Petrol, gas, and electricity have all risen by around 20%. The post-pandemic spike may settle down by 2024, but not at today’s rates. Inflation will mean it’s always going to cost more, and there is absolutely nothing any Prime Minister can do about those prices, because the Tories sold our energy off in the 1980s.

5. Levelling up needs to happen. Tory mayor for the Tees Valley, Ben Houchen, said today Red Wall voters need to see “spades in the ground”, improved transport infrastructure, the prospect of new jobs on the horizon. What can they see? HS2’s northern leg cancelled, less funding per head for public services and, as the Mirror reports today, schoolchildren learning in converted staff toilets and classrooms that are unfit for human habitation.

Not levelling up, so much as eroding down
(

Throw on top of that binfire an increase in National Insurance contributions, a housing crisis, an immigration crisis caused by a refusal to accept the immigrants we need and an inability to get rid of those we don’t, and you’ve handed Keir Starmer the economy, stupid.

The Tories are ceding territory to Labour every day. Even now, two years before an election, Labour has been leading on the cost of living for months and demanding a VAT freeze on energy which is the only weapon a PM has against fuel prices, and which will have to happen in March before the price cap kicks in. When the Chancellor announces that, Starmer will thank him nicely for listening, and the country will see an Opposition that is already in charge.

Equally important is that the Tories have nothing to rely on but the character of the Prime Minister, and what was once funny is now despicable. His charisma has become cancerous, his rhetoric risible. Who believes, any more, in 40 new hospitals, or control of our borders, or a fix for Northern Ireland? And how many believe, instead, that his gold wallpaper mattered more to him than keeping Covid out of care homes?

With no Brexit bounce, no levelling up visible, and money pouring from our pockets into the tax-avoiding bank accounts of Tory donors, any government that had promised the opposite would struggle to get re-elected.

But this one is led by a man whose character has been defined by WhatsApp, by wine-while-you-work, by denials and blame-shifting. If you look at Boris Johnson now, you can no longer see a tousle-haired, blond buffoon flying thrillingly too close to the sun. It’s dead cat upon dead cat, as far as the eye can see.

The Red Wall is crumbling. Tunbridge Wells is disgusted as never before. And there is no firm ground that any future election can be fought on, even if the Tories find someone else to lead them – it’s a shifting swamp of 3-word phrases, which is not going to be enough to win an unprecedented 19 years in power.

All Boris Johnson has got are his promises. And they are also Labour’s best ammunition. 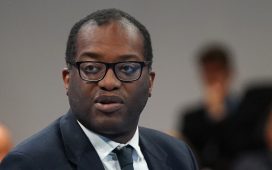