The Harvard astrophysicist who first suggested that the interstellar object (ISO) ‘Oumuamua was a ‘lightsail’ sent from another civilization in space now suggests there may be a link to the mysterious space object and the US government’s upcoming report on UFOs.

In an op-ed for Scientific American, Loeb, who is the Frank B. Baird Jr. Professor of Science at Harvard, theorizes that ‘Oumuamua could have ‘been meant to scan signals from all viewing directions,’ looking for sensors that a yet-to-be discovered predecessor put into Earth’s atmosphere.

‘A predecessor to ‘Oumuamua could have been a craft that deposited small probes into the Earth’s atmosphere without being noticed, because it visited before Pan-STARRS started its operations,’ Loeb wrote in the op-ed.

‘Along this imaginative line of reasoning, ‘Oumuamua could have arranged to appear as coming from the neutral local standard of rest, which serves as the local “galactic parking lot,” so that its origin would remain unknown.’

In an interview with DailyMail.com, Loeb noted that ‘Oumuamua’s flat structure – the size of a football field – could be a receiver for the aforementioned probes ‘that were sprinkled on Earth long ago.’

‘In this context, its tumbling motion was meant to collect possible signals from all directions and the UAP may be the probes that it received signals from,’ Loeb said via email. 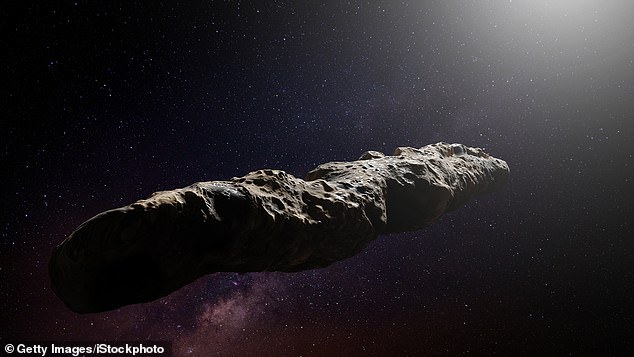 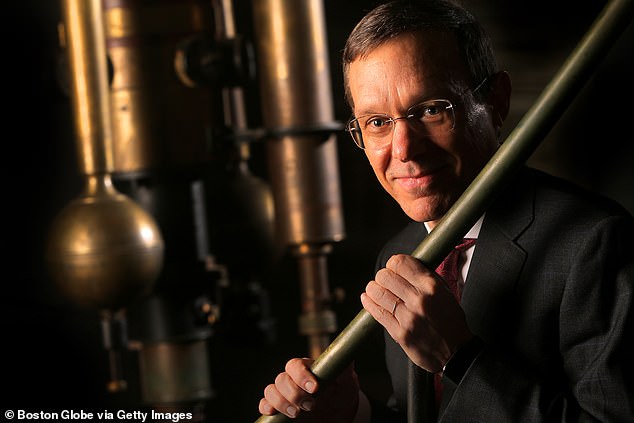 Loeb theorizes that ‘Oumuamua could have been used to scan for signals from previously sent small probes. He told DailyMail.com ‘Oumuamua’s flat structure could be a receiver for the probes

A leaked version of the report from the Pentagon on unexplained aerial phenomena (UAP) sightings suggests there is no evidence to support they are alien spacecraft, but it does not rule this possibility out either.

See also  Once infected, how does coronavirus affect the body?

The report also theorizes the objects could also be new weapons developed by Russian or China, though Loeb says if the weapons were a national security risk, that fact would never be made public.

‘Hence, it is reasonable to conclude that the U.S. government believes that some of these [UAP] objects are not human in origin,’ Loeb continues.

‘This leaves two possibilities: either UAP are natural terrestrial phenomena or they are extraterrestrial in origin.’

The Harvard researcher notes there should be ‘a quadrillion’ objects similar to ‘Oumuamua within the solar system if they have a natural origin, but that does not appear to be the case.

To date, astronomers have only found two ISOs: ‘Oumuamua and Comet 2I/Borisov, which was discovered in 2019.

A number of theories – including that it is a hydrogen iceberg or nitrogen iceberg- have been postulated about the origins or the composition of the 900-foot-long cigar-shaped ‘Oumuamua since it was discovered in October 2017.

Loeb says, however, the fact that ‘Oumuamua is artificial in origin has to remain on the table until better data is obtained.

‘Given the challenges that these proposals face and the fact that they contemplate something that we had never seen before, the possibility of an artificial origin should be left on the table,’ Loeb told DailyMail.com.

Though the link between ‘Oumuamua and artificially created UAP is highly speculative in nature, Loeb notes science should not thumb its collective nose at the idea, but rather study it more.

‘But rather than simply wonder about possible scenarios, we should collect better scientific data and clarify the nature of UAP,’ Loeb penned.

‘This can be done by deploying state-of-the-art cameras on wide-field telescopes that monitor the sky. The sky is not classified; only government-owned sensors are. By searching for unusual phenomena in the same geographical locations from where the UAP reports came, scientists could clear up the mystery in a transparent analysis of open data.’ 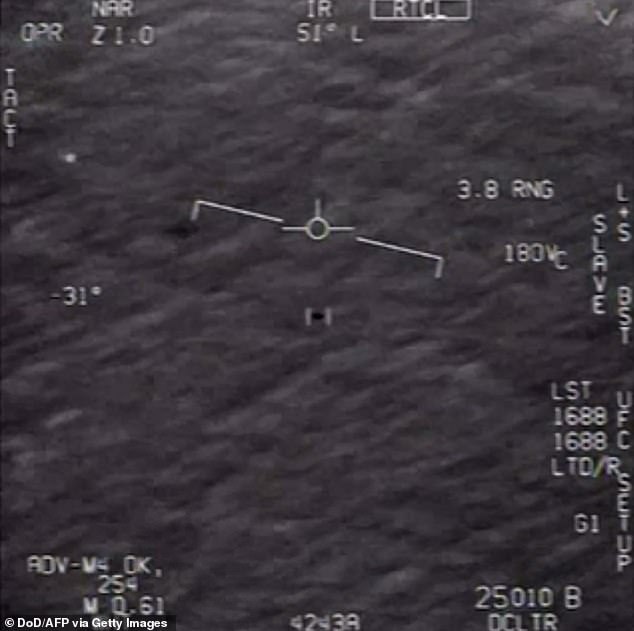 The government report, which looked at more than 120 incidents of unidentified objects over the past 20 years, is set to be officially released later this week 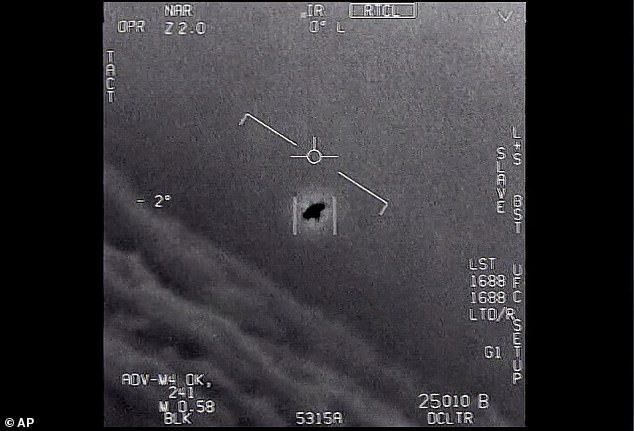 The footage had been previously acknowledged as real by the Navy, and captured what pilots recorded on their video sensors during training flights in 2004 and 2015 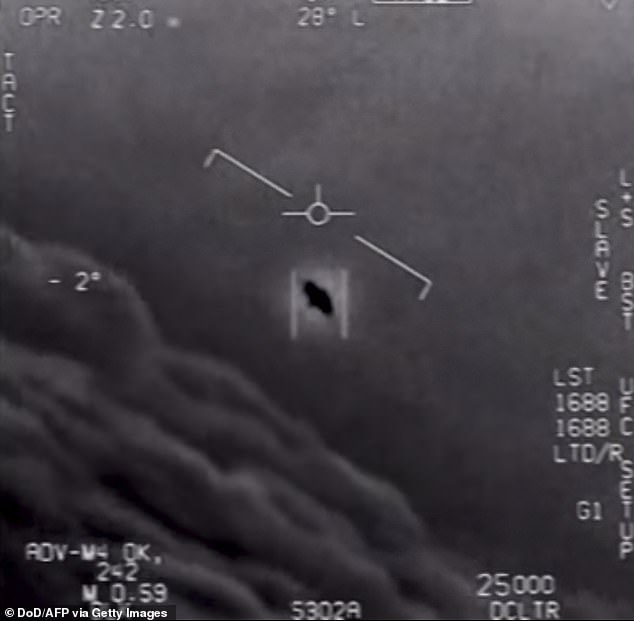 The government report, which looked at more than 120 incidents of unidentified objects over the past 20 years, is set to be officially released later this week.

The term UAP has recently replaced UFO in the lexicon, especially in light of the U.S. Pentagon declassifying three videos in April 2020.

The footage had been previously acknowledged as real by the Navy, and captured what pilots recorded on their video sensors during training flights in 2004 and 2015.

Two of the clips were first published in 2017 by the New York Times and the third by the To The Stars Academy in 2018 – a group that specializes in unexplained phenomenon and was founded by Blink-182 guitarist Tom DeLonge.

Our first interstellar visitor sailed past Earth at at 97,200mph in 2017, but what exactly was Oumuamua?

It was first spotted by a telescope in Hawaii on 19 October, and was observed 34 separate times in the following week.

It is named after the Hawaiian term for ‘scout’ or ‘messenger’ and passed the Earth at about 85 times the distance to the moon.

It was the first interstellar object seen in the solar system, and it baffled astronomers.

Initially, it was thought the object could be a comet.

However, it displays none of the classic behavior expected of comets, such as a dusty, water-ice particle tail.

The asteroid is up to one-quarter mile (400 meters) long and highly-elongated – perhaps 10 times as long as it is wide.

That aspect ratio is greater than that of any asteroid or asteroid observed in our solar system to date.

But the asteroid’s slightly red hue — specifically pale pink — and varying brightness are remarkably similar to objects in our own solar system.

Around the size of the Gherkin skyscraper in London, some astronomers were convinced it was piloted by aliens due to the vast distance the object traveled without being destroyed – and the closeness of its journey past the Earth.

Alien hunters at SETI – the Search for Extra-terrestrial Intelligence based at Berkeley University, California said there was a possibility the rock was ‘an alien artefact’.

But scientists from Queen’s University Belfast took a good look at the object and said it appears to be an asteroid, or ‘planetesimal’ as originally thought.

Researchers believe the cigar-shaped asteroid had a ‘violent past’, after looking at the light bouncing off its surface.

They aren’t exactly sure when the violent collision took place, but they believe the lonely asteroid’s tumbling will continue for at least a billion years.