Hands on with Sony’s smartphone designed for movie lovers: Xperia 1 handset features a 21:9 ratio screen used in cinemas – but is it REALLY worth the expected £799 price tag?

Joe Pinkstone In Barcelona For Mailonline

Sony unveiled its flagship Xperia 1 smartphone in Barcelona this week, as well as a pair of mid-range versions aimed at movie lovers.

The announcement from the firm reveals its unique approach when compared to some of its tech rivals that have focused on foldables and 5G compatibility.

The Japanese giant released three phones with a unique screen ration of 21:9 that display TV shows and films in the way they are shown in cinemas.

With the 1 being the top of the range, the firm has also announced the 10 and 10 Plus.

Information on the Xperia 1 is sparse but the marquee device is rumoured to cost up to £799 – making it a rival to the iPhone XR.

Sony did release specifications and prices for the 10 and 10 Plus, the mid-range options  which are available for pre-order now and will cost £299 and £349, respectively.

MailOnline got hands on with the devices. 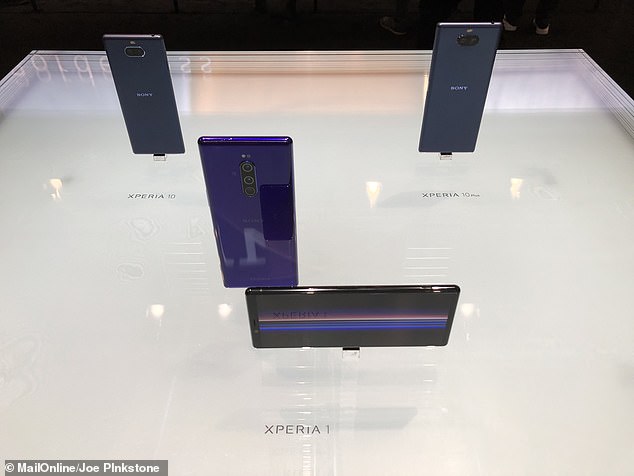 Sony’s unveiling of the flagship Xperia 1 I(front)n Barcelona announced to the world the firm is taking a different approach to some of its tech rivals. With the 1 being the top of the range, the firm has also announced the 10 (pictured, right)  and 10 Plus (pictured, left)

The first thing that grabs the attention of any user is the length – all six and a half inches of equipment.

In its bid to make a phone designed to display cinema the way the director envisioned, Sony has made a phone that is unlike anything else on the market.

It allows the phone to run two things on screen simultaneously – such as watching a YouTube video on the top of the screen while also catching up on emails or messages below.

Although it fits nicely in the palm of the hand, one handed use means reaching the far corners of the screen is impossible and fitting it into small handbags and pockets may be tricky.

It runs smoothly when not being used as a mini-TV thanks to the Qualcomm Snapdragon 630 processor fitted in all three models.

The chips make it an easy task to have various windows open at once without the device showing signs of strain. 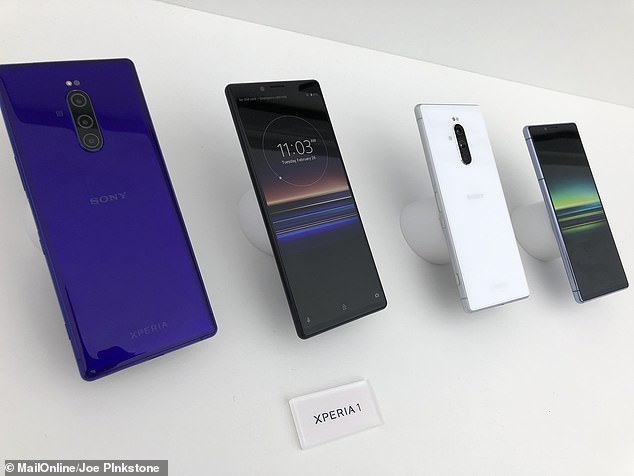 The Japanese giant released three phones with a unique screen ration of 21:9 which is aimed at displaying TV shows and films in the way it is shown in cinemas. Pricing and release dates for the 1 (pictured) have not been released

The phone’s cameras are serviceable but relatively mediocre compared to others on the market.

Also at Mobile World Congress in Barcelona, Nokia unveiled their PureView device which is able to take images of up to 240 MP resolution, for example.

Selfies are aided with a stabilising portrait mode which pales in comparison to the AI-aided photos snapped by phones such as the latest Pixel.

Taking selfies on the 21:9 ratio is also ill-advised – as it stretched my face to such a point I resembled a melted candle.

The device in total appears to be well put together but its widespread appeal remains unknown beyond hardcore movie fanatics.

Even this designated demographic will have some difficulty accepting the phones – which are available for pre-order today – as most non-cinema content would not be readily available.

The phone is not perfect but it occupies a niche which, for the projected price of £299 for the 10 and £349 for the 10 Plus, would offer some value.

The question mark over the prooducts, which remains to be seen, is if the niche actually exists or not.

Remains of 29 people buried as offerings 1,000 years ago discovered

Some carnivores, such as bears, cats and civets change their hunting schedule to avoid each other

Apple: Rare VIDEOPAD prototype set to be auctioned – and is predicted to sell for up to $12,000