TORY MPs have accused Matt Hancock of downplaying the government’s coronavirus vaccine target amid claims his department has snubbed help from pharmacies and won’t deliver the jab to GPs on Sundays.

The government’s radical blitz sets out to protect 13million at highest risk from Covid by mid-February – with the over 65s and younger adults with serious health conditions expected to receive the jab first.

But Tory MPs told the Mail Online that the Health Secretary had set out a list of reasons why the target might not be hit in a Zoom call – suggesting the ambitious number was in fact the “best case scenario”.

New guidance issued to NHS Trusts also warns the jabs won’t be issued on Sundays or after agreed ‘cut-off points’ every lunchtime – even if supplies run low.

One MP claimed: “He emphasised that the prospect of the vulnerable being vaccinated by mid-February was a best-case scenario.

“It was heavily caveated. He set out plenty of reasons why it might not happen by then.

“He left himself plenty of wriggle room. It was very much an aspiration and there were no guarantees. I fear that they have not got the vaccine in sufficient quantities.”

“They should have been stockpiling. The rollout needs to happen as fast as possible. It’s the only hope we have,” the MP added.

Mr Hancock reportedly told MPs that two million doses of the Oxford vaccine will arrive in the coming days ahead of a further rollout next week.

But they warned him that nothing less than a “national mobilisation” would enable him to meet his ambitious target to vaccinate 13million by mid-February.

In a bid to help, high street pharmacies have offered to give a million Covid jabs a week – but they have been shunned by ministers, according to reports.

This is despite Mr Johnson’s pledge to use “every second” to put an “invisible shield” around the nations most vulnerable.

Royal Pharmaceutical Society president Sandra Gidley said there were thousands of high street pharmacies “ready, willing and able” to assist in the rollout.

But Simon Dukes, chief executive of the Pharmaceutical Negotiating Services Committee, said the industry has been met with a “de facto silence”.

While that was necessary for the Pfizer vaccine – which is more complicated to handle – she said the arrival of the Oxford-AstraZeneca jab meant it could be administered by much smaller units.

There are over 11,000 pharmacies. If each of those does 20-a-day that is 1.3 million-a-week extra vaccines that can be provided, very often to those who are hardest to reach.

“There are over 11,000 pharmacies. If each of those does 20-a-day that is 1.3 million-a-week extra vaccines that can be provided, very often to those who are hardest to reach.”

Covid vaccine deployment minister Nadhim Zahawi has insisted, however, that pharmacies will play a part.

He told Sky News: “The plan is, as we launched initially with Pfizer, a novel vaccine in hospital hubs, then into what are called Primary Care Networks – so a network of five or six GPS coming together – that has grown massively.

“We then go to national vaccination hubs that the NHS have got planned.

“And of course the community pharmacies and the independent pharmacy sector as well.”

It comes as leaked documents show Public Health England will not deliver the Covid-19 vaccines to NHS hospitals on Sundays, reports claim.

Next-day deliveries should only be expected from Monday to Friday, providing orders are placed before 11.55am, operating procedures issued to NHS Trusts warn.

Reports say that if an order is placed on a Friday afternoon or Saturday morning, it will not arrive until Monday.

A PHE source told the Telegraph: “You need a cut-off point or the whole system would fall over. And we agreed the six-day week with the NHS.”

But interim chief executive of PHE Michael Brodie said: “We run a seven-day-a-week service and have fulfilled 100 per cent of orders from the NHS on time and in full – with routine next-day deliveries six days a week, as agreed with the NHS and the capability to send orders on Sundays if required.”

Covid vaccine deployment minister Nadhim Zahawi said this morning the government’s vaccine goal is a “stretching target” but he was confident it would be delivered.

“But I’m confident that with this plan that the NHS have put together we will deliver this.”

He added that there will be a “massive acceleration” in numbers vaccinated in the coming days, including “a real step up” between January 4 and January 11.

When asked if more than two million people needed to be vaccinated a week to reach the mid-February target of vaccinating almost 14 million people, Mr Zahawi added: “You’re going to see that increase – the NHS have got a very clear plan.

“We’ve got a fantastic team working, seven days a week, all hours to deliver this.”

A Department for Health source said: “As the Health Secretary said on the call, our goal is to have offered priority groups one to four their first dose by the middle of February.”

The source said the goal was “ambitious” but “achievable”.

As the country entered a strict March-style lockdown, the PM revealed that 1.3m have already had a jab, including a quarter of all those over 80.

In a stark warning, England’s chief medical officer Chris Whitty warned the vaccine timetable was “realistic but not easy”, and that the NHS would have to use multiple channels to get it out.

Others have suggested more can be done.

Tony Blair said this morning the UK needs to be vaccinating 5million people a week to get the virus under control, adding that the government needs to alter its jab plan in reaction to the new Covid strain.

The former Prime Minister told Good Morning Britain we could have half the population vaccinated by the end of March if we “throw absolutely everything at this”.

Meanwhile, the private sector has mobilised to support the NHS with the vaccination programme.

Hundreds of Best Western hotels could also be turned into ‘cottage hospitals’ to ease the strain.

Plans sent to the Cabinet Office this week reveal the sites would handle everything from pre-surgery assessments to IV treatments, such as dialysis, as well as MRI and CTI scans and post-Covid recovery support.

Pub and bar companies including Young’s and Marstons, and café-bar chain Loungers say they’ll offer their sites as jab centres, while Boots will initially open up three vaccine sites in Halifax, Huddersfield and Gloucester.

It comes as Professor Whitty and chief scientific adviser Sir Patrick Vallance revealed one in fifty people now have the disease – more than one million Brits.

In England alone, some 27,000 people are in hospital with the virus, 40 per cent more than during the first peak in April.

Dr Susan Hopkins, deputy director of the national infections service at Public Health England warned the situation is “the most serious we’ve been in so far this pandemic”.

She told BBC Breakfast: “We are now seeing a number of patients in hospitals 40% higher than the cases at the peak in March/April.

All the reasons you can leave your home during lockdown

Other services you can still visit are: 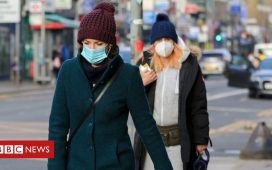 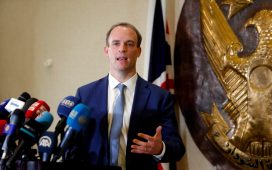 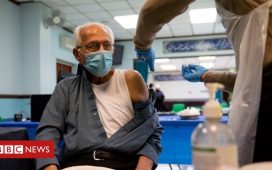