As ministers unveiled the first tranche of their long-awaited subsidy proposals, which focuses on soil, the Wildlife Trusts, National Trust and Royal Society for the Protection of Birds labelled it a “huge disappointment”.

They warned that the Sustainable Farming Incentive, the scheme announced on Thursday, was “at risk of recreating the status quo by funding basic good practice, and in some cases will not require any extra benefits for nature at all”.

John Gummer, also known as Lord Deben, chair of the independent Climate Change Committee, labelled the plans “not good enough”. “Unless we make sure as much of our soil as possible is sequestering carbon, and until we have a system where we can measure that year by year, we cannot meet our net zero goals,” he said. “We have got to move faster on that.”

The Department for Environment, Food and Rural Affairs said in documents seen by the Financial Times that farmers would be paid for caring for soil for the first time to help ensure that carbon is kept sequestered in the ground.

This will include measures such as planting “cover crops” in winter and reducing the use of fertilisers and pesticides.

Full details of the scheme are due to be unveiled later on Thursday. Farmers will be able to apply for the payments from next year as European-style subsidies based on the area of land farmed are reduced between now and 2027. A pilot version is already under way.

But the wildlife groups said the “shocking lack of ambition” in the initial announcement made them fear for the rest of the Elms programme. The UK has pledged to reach net zero greenhouse gas emissions by 2050.

“A low-ambition scheme will fail to deliver on the government’s environmental commitments or provide value for money for the taxpayer, and instead will act as an income support mechanism for farmers to continue to farm in an unsustainable way,” said the Wildlife Trusts.

Farming groups also reacted with scepticism, raising concerns that the payments of between £22 and £58 per hectare might not be sufficient to attract farmers to participate. 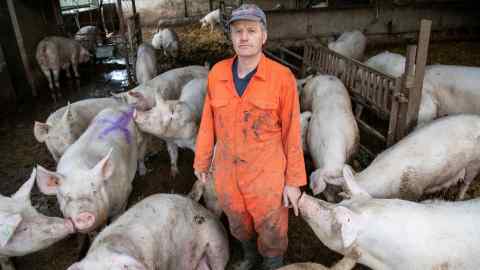 Tom Bradshaw, vice-president of the National Farmers’ Union, said: “It is vital that the [scheme] recognises the significant costs farmers could incur in delivering public goods and fully recognises that in the payment rates, at a time when direct payments are phased out.

“We have concerns in this area and it is vital that these are addressed in order to attract the participation Defra envisages and that is required to deliver the environmental ambition of the scheme.”

Defra said its goal was for 70 per cent of farms and farmland to be enrolled in the scheme by 2028.

George Eustice, environment secretary, told a conference of the Country Land and Business Association, a group for land and business owners, on Thursday: “We will never address the complex environmental challenges we have unless we incentivise changes across most of the farmed landscape and that is what we aim to do.

“If we can get this right then a decade from now there will be a new generation of farmers wanting to get involved and the rest of the world will be wanting to come here to see how it was done.”