Universities, unions and ministers are at loggerheads over when all students should resume face-to-face teaching, calling current plans a “major blow” and claiming they make “no sense” considering course timetables.

The Department for Education (DfE) expects students still off campus to be able to return to in-person teaching when the further easing of coronavirus restrictions over socialising is confirmed for no earlier than 17 May.

While some university bodies have said it is too late, with estimations of one million students unable to access face-to-face teaching for at least another month, one union has called on the return to be pushed back to the next academic year.

Jo Grady from the University and College Union (UCU) also said the mid-May goal to restart in-person activities “makes absolutely no sense” because “many students’ exams will already have finished”.

One university leader also called the logic of the 17 May date into question, saying it showed a “cavalier disregard for details” as “many universities will have finished their teaching year” by then.

Professor Graham Galbraith, vice-chancellor at the University of Portsmouth, added: “Students can now buy a book on British history in Waterstones and discuss it with a tattoo artist while they have their body decorated, but they cannot do the same thing in a Covid-secure environment with their university lecturer.”

On Tuesday, the universities minister said the roadmap out of lockdown is designed to ease restrictions cautiously to keep the country moving towards full reopening.

In a statement over plans for the full return alongside its next stage, Michelle Donelan said more people will have been vaccinated by then and this decision gives more time to boost testing.

“The movement of students across the country poses a risk for the transmission of the virus – particularly because of the higher prevalence and rates of transmission of new variants,” she said.

The prime minister said while vaccines had helped, lockdown restrictions had done the “bulk of the work” in reducing Covid-19 infections.

But Professor Julia Buckingham from Universities UK (UUK) said the plans for higher education were “hugely disappointing” for students in England who have been learning online since before Christmas, when teaching went online to facilitate the migration home for the holidays.

“With schools, colleges and many businesses open, we now need the government to urgently explain how it reached this decision,” the body’s president said.

UUK – which represents 140 universities – had called for a full return to university this week as England’s lockdown eased further, warning the government not to take the “resilience” of students for granted.

Dr Tim Bradshaw from the Russell Group, which represents 24 leading universities, estimated the latest announcement means around one million students will be learning online for at least another month – including those on business, law and maths courses.

“Whilst we recognise the need for caution as lockdown measures are eased, the government’s decision today is a major blow,” he said.

“It fails to take into account the data which shows the safety of teaching spaces, and the very low infection rates at universities right now, despite the majority of students being on campus.”

As England went into lockdown in early January, most students saw their courses move online and were told to stay where they were, while many were still at home for the Christmas holidays.

From 8 March, all students on practical courses were allowed to join others on courses such as medicine and dentistry back on campus for in-person teaching, while others were still not allowed to travel back to university.

It is estimated that around half of university students in England are currently not eligible to return to in-person teaching.

On Monday, the National Union of Students called for “clarity” over what the plans were for the summer term.

On Tuesday, the universities minister announced all remaining students “will be advised to return to in-person teaching” alongside the next step of England’s roadmap out of lockdown – which will see a greater loosening of restrictions on social contact and most indoor settings reopen.

“This will take place no earlier than 17 May, following a further review of the data against the four tests,” Ms Donelan said.

Ms Grady from the UCU, who has called for the return to be delayed until the next academic year, accused the government of treating students and staff as an “afterthought at best” in the pandemic, saying it was “no surprise” the announcement was made the day after the summer term started for many students.

The Department for Education has been approached for comment. 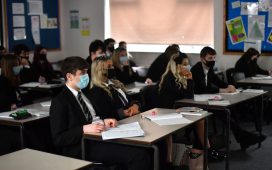