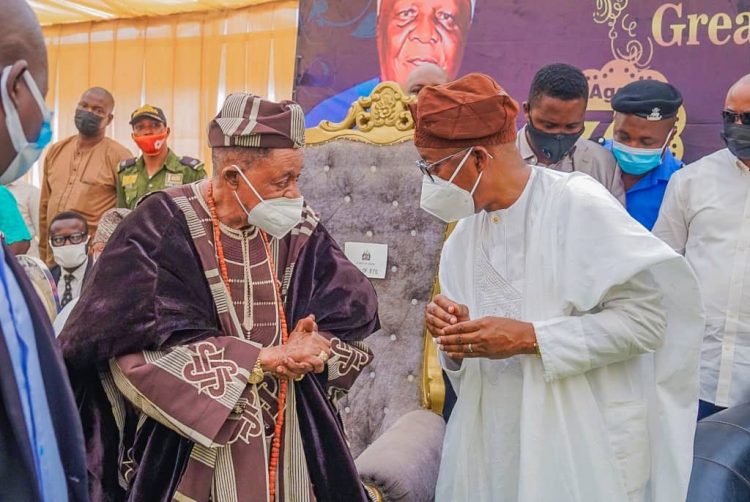 Osun State Governor Adegboyega Oyetola, on Sunday, extolled the virtues of the late Akirun of Ikirun, Oba AbdulRauf Olawale Olayiwola Adedeji, who joined his ancestors on in February, this year.

He said the progressive family had lost a rare gem whose commitment and dedication to the advancement of the party and the people of Ikirun was commendable and second to none.

Oyetola said this on Sunday at the 40th day Fidau prayer session held in honour of the departed monarch.

He also noted that the late Akirun was a strong supporter of his administration and respected traditional ruler who cared for his subjects and prioritised their welfare.

Gov. Oyetola who described death as inevitable, said the demise of the monarch had further testified to the fact that death is unpredictable and that every mortal will die.

He called on the people to emulate the virtues of the late king and tread the path that would impact positively on the lives of others.

Oyetola said: “On behalf of the Government and the people of Osun, I once again commiserate with the people of Ikirun over the passing of our beloved father and leader, the late Akirun of Ikirun, Oba AbdulRauf Olawale Adedeji II.

“As a leader, Oba Adedeji cared for his people, demonstrated strong concern and commitment to their welfare and the development of Ikirun as the ancient town witnessed tremendous development, peace and stability during his reign.

“The Oba Adedeji was a respected father and strong supporter of our Administration. We will miss him for his wise counsel, wisdom and courage. Baba will also be long remembered for his impacts, achievements and outstanding legacies.

“As we gather here today for his Fidau, I pray Allah to forgive his shortcomings, admit him into Aljanah Firdaus and comfort his family and loved ones,” Oyetola added.

In his remarks, the Asiwaju of Ikirunland, Chief Gazal Lawal, described the late monarch as an unusual traditional ruler whose reign attracted countless monumental achievements to the ancient town.

He lauded the transformation recorded during the reign of the late Akirun just as he prayed God to grant him eternal rest in paradise.

Oba Lawal who described the deceased as a truthful person, said it gladdened his heart to know that God used the late monarch to orchestrate good things to transform Ikirun.

In his sermon, Sheikh Kamil Muhammed-Jamiu, eulogized the late Oba for the good things God used him to do while on earth. The cleric called on the people to learn from the late traditional ruler whom he said, used his entire life to serve God and humanity.