Google and scientists at Harvard University developed a browsable 3-D map of a tiny portion of the human brain, using 225 million images and more than 1 million gigabytes of data.

The color-coded map shows 4,000 axons connecting to a single neuron—the most fundamental cell in our nervous system, responsible for receiving sensory input.

Though it represents just one cubic millimeter of brain tissue, this is the largest sample of brain tissue imaged and reconstructed in such detail for any species. 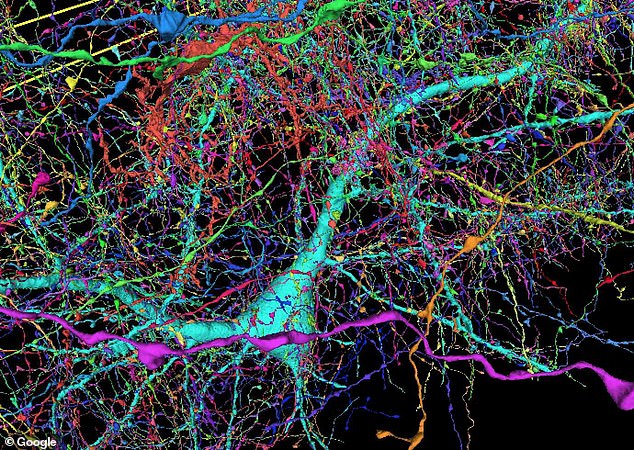 Google and Harvard’s Lichtman Lab teamed up to create Neuroglancer, an interactive map of just one cubic millimeter of brain tissue that required more than a million gigabytes of data to assemble

To create the map, researchers at Google and the Lichtman Lab at Harvard University took a microscopic sample from the temporal lobe of a human cerebral cortex.

This tissue sample was stained and coated in resin, before it was cut into 5,300 slices, each about 30 nanometers thick.

An electron microscope that can zoom down to about 4 nanometers scanned the sample, creating 225 million two-dimensional images ‘that could be stitched together to manifest a single 3D volume,’ according to SyFy newswire.

Even with all that effort, the map only details about one cubic millimeter of the human brain. 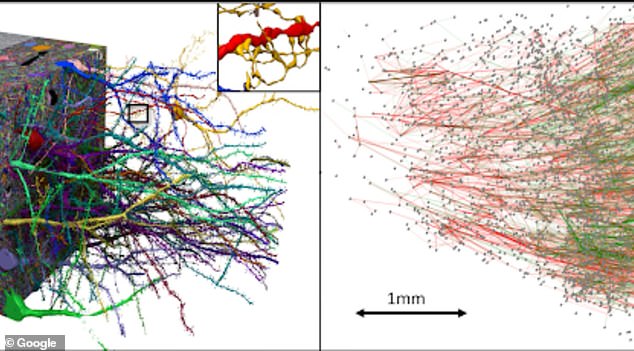 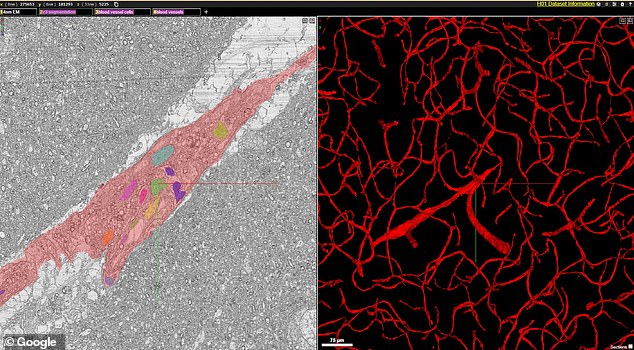 In January 2020, Google released a similar map, or connectome, detailing the structures and connections of half of the brain of a fruit fly

‘While the fruit fly brain is small enough to attain a relatively complete map using modern mapping techniques,’ Google said in a June 1 blog post, adding ‘the insights gained are, at best, only partially informative to understanding the most interesting object in neuroscience — the human brain.’

The tech giant followed up its fly research with the ‘H01′ dataset, a 1.4 petabyte rendering of a human brain covering just one cubic millimeter of brain tissue. 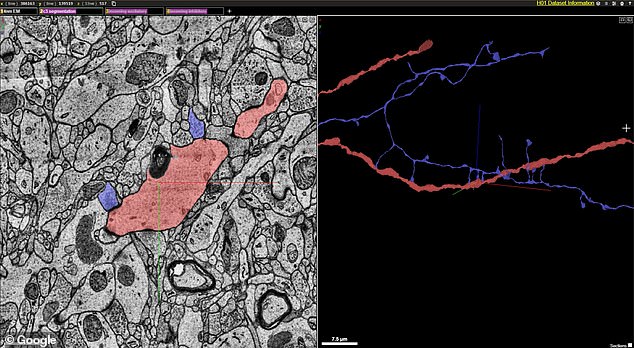 The goals of developing the Neuroglancer were to produce a new way to study the human brain while also improving the underlying technology used to map an organism’s nervous system. Pictured: Serial contact between a pair of neurons

Machine learning algorithms carefully scanned the slice to identify the different cells and structures but because automated reconstruction is imperfect, the scientists manually ‘proofread’ some 104 cells.

Often nicknamed ‘gray matter,’ the cerebral cortex is the largest part of the mammalian brain, with up to six layers of nerve cells. 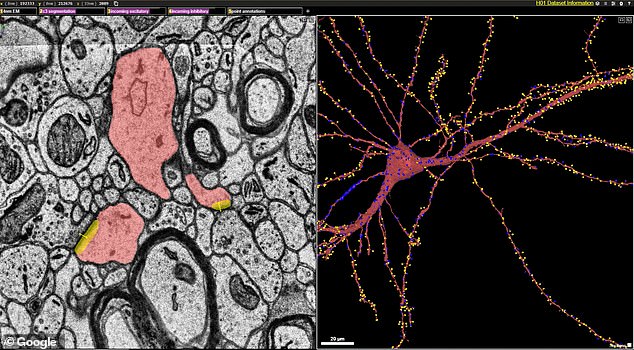 Tissue samples for the project were provided anonymously by patients at Massachusetts General Hospital. Pictured: Excitatory and inhibitory incoming synapses

Tissue samples for the project were provided anonymously by patients at Massachusetts General Hospital, where surgeons remove pieces of normal cerebral cortex while performing surgery to alleviate epilepsy.

The 3D map is the first large-scale study of synaptic connectivity in the human cortex that spans multiple cell types across all six layers of the cortex. 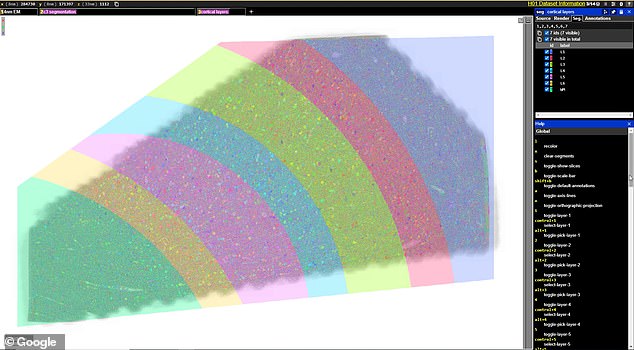 The cerebral cortex is the largest part of the mammalian brain, with up to six layers of nerve cells. Pictured: The volume spans all six cortical layers

Visitors to the Neuroglancer can select specific cells on the basis of their layer and type and view the cell’s incoming and outgoing synapses.

Google said the chief aims of the project were to produce a new way to study the human brain while also improving the underlying technology used to map an organism’s nervous system.

‘Over time, we expect to add additional cells to this verified set through additional manual efforts and further advances in automation.’

WHAT DOES THE CEREBRAL CORTEX DO?

Researchers at Washington University in St. Louis tracked the growth of 30 premature babies’ brains for a new report.

They found that studying the babies’ brain folds in their cerebral cortices might hold answers to how cognitive diseases begin.

The cerebral cortex coats the cerebrum and cerebellum’s surface. 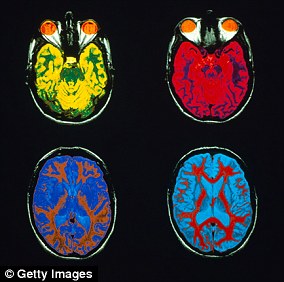 The vital tissue layer is as thick as a stack of two or three coins, according to the US National Library of Medicine.

Its name comes from the Latin word meaning ‘bark’.

Most information processing occurs in the cerebral cortex, and it is sometimes referred to as ‘gray matter’.

The cerebral cortex is gray because nerves there do not have the insulation which makes other areas of the brain white.

Folds in the cerebral cortex increase the brain’s surface area and the amount of information the organ can process.