SINGAPORE (ICIS)–Asia may end up as a dumping
ground for many chemicals from the world over,
as US and European markets slump and economies
slide into recession.

With demand drying up and chemical prices
crashing in the West as a result of a no-end to
sight to the coronavirus pandemic – deemed the
worst since the Spanish Flu and the Great
Depression – Asia is becoming a target for
export cargoes.

Oil and chemical trade flows have changed
rapidly since the global outbreak of the novel
coronavirus, which was believed to have
originated in China in December 2019.

However, the arbitrage window from the EU and
Americas to Asia is now fast closing as many
petrochemical prices in Asia continue to fall
to record lows, with the margins now not
workable, or not attractive for traders to
bring in deep-sea cargoes.

The overloaded Asian markets are also not
likely to absorb the deep-sea or arbitrage
inflows as the economic indicators are poor and
business undertakings are almost at a
standstill as a result of lock-downs in place
in many countries globally.

“The European cargoes flooding into Asia from
March is a short-term stress behaviour
regardless of the cost to balance the supply in
Europe and the US,” said ICIS analyst Ann Sun.

Even hopes for China to rebound economically
from the easing of its domestic coronavirus
situation seem remote in a intertwined
globalized world economy;
China’s first-quarter economy may have
shrunk 8.5% year on year, or 12.3% on a
seasonally adjusted quarter-on-quarter basis,
according to Oxford Economics.

Recovery would be slow that for the whole of
2020, the world’s biggest economy may not
expand at all, it said.

China posted its slowest pace of economic
expansion in nearly 30 years in 2019 at 6.1%,
partly due to the prolonged US-China trade war.

The product’s crack spread, a measure of its
refining margin, slumped from $19.08/tonne on
31 March to -$23.60/tonne on 1 April, when spot
naphtha prices
dropped to their lowest in 19 years.

Weakness in oil prices amid ample supply and
poor demand caused by the coronavirus pandemic
has hurt naphtha market sentiment.

Asia’s naphtha markets grappled with looming
supply from the Middle East as refineries in
the region return from scheduled turnarounds.

Weak transport fuels consumption in Europe on
the back of restrictions to travel and
lockdowns chipped away at gasoline-blending
demand for naphtha.

Consequently, excess supplies from northwest
Europe and the Mediterranean are envisaged to
be finding their way to Asia as a receiving
outlet, at a time when petrochemical demand is
downbeat amid cracker turnarounds.

An estimated near 2m tonnes of Western
arbitrage naphtha, or possibly more could land
in Asia next month, elevated from monthly
average volumes at around 1.5-1.7m tonnes.

METHANOL EXPORTERS TARGET
CHINA
Methanol suppliers and
traders are targeting to ship cargoes to China
owing to depressed demand in Europe and the US,
according to ICIS analyst Rachel Qian.

In addition, cargoes from the Middle East
especially from Iran are being diverted to
China as well given the lockdown in India, a
key market of the product, Qian said.

“This will lead to an accelerated competition
between import cargoes and China local cargoes,
and probably would cause some China domestic
producers to lower their operating rates or
shut down, as China is a marginal producer
globally,” Qian added.

ASIA BUTADIENE ARB WINDOW CLOSING
FAST
Seething with demand
collapse in the US and Europe, the
Asian butadiene (BD) market plummeted in
early April as an influx of deep-sea cargoes
from the west headed to Asia, prompting traders
here with cargoes in hand to unload at
lower-than-expected prices.

However, the arbitrage window from EU and
Americas to Asia is now fast closing as many
petrochemical prices in Asia continue to fall
to record lows.

The margins now are not workable or not
attractive enough for traders to bring in
deep-sea cargoes.

Chinese demand for BD imports had slumped due
to the availability of ample local supply.

With the downstream synthetic rubber (SR)
market in the doldrums and demand for
acrylonitrile butadiene styrene (ABS) falling,
spot appetite for BD had waned.

Sentiment in the BD market has been negative in
the chaotic market dominated by the coronavirus
pandemic
development in 2020 so far.

In the US,
butadiene has few outlets as end-use
businesses remain closed.

The demand shock of coronavirus has erased the
logistics concerns stemming from that event,
which were expected to plague the US value
chain through H1 at least.

Now, domestic volumes are heading
to Asia, which has become one of the few
outlets for both US and European producers.

This is not likely to be a solution for long.

PROPYLENE DEEP SEA CARGOES MAY HEAD TO
ASIA
Propylene
supply in Asia could lengthen in the near term
with downstream producers looking at further
lowering plant operating rates.

Deep-sea cargoes from south America, as well as
India, were heard available due to poor
downstream demand and may head to Asia.

Amid poor sentiment, spot propylene prices have
fallen to a near five-year low of $557.5/tonne
CFR (cost and freight) NE (northeast) Asia in
the week ending 3 April, ICIS data showed.

The country’s appetite for imports will depend
on pricing of domestically available cargoes.
Based on current prices, imported cargoes are
cheaper.

Buyers polled did not show too much interest in
spot lots.

MIXED XYLENES ARB WINDOW
OPENS
The US-to-northeast Asia
arbitrage window for
mixed xylenes (MX) has re-opened after
several years due to the collapse of aromatics
prices in the US amid the coronavirus pandemic,
while demand in Asia is comparatively stronger.

Other sellers in the US were still offering MX
for prompt loading, with a discount on the
reported prices due to poor outlook in the US
market, according to market participants.

South Korea’s Lotte Chemical had bought a mixed
xylene cargo of 30,000-40,000 tonnes loading
from the US in April, which is expected to
arrive in end-May.

Other regional end-users are mulling spot
purchases from the US as well.

ASIA ETHYLENE PRICES
WEAKEN
Ethylene suppliers outside
the region continue to scour Asia for buyers
for May and June arrival cargoes due to a
drop-off in demand in their domestic and
neighbouring markets.

Over 90,000 tonnes of deep sea cargoes have
been sold into Asia for delivery between April
and the first half of June.

Arbitrage opportunities for sellers seeking to
move cargoes from the Americas and Europe,
however, are increasingly slim as Asian spot
prices weakened further.

The arbitrage window continues to open, with
cargoes from Europe and the US offered. 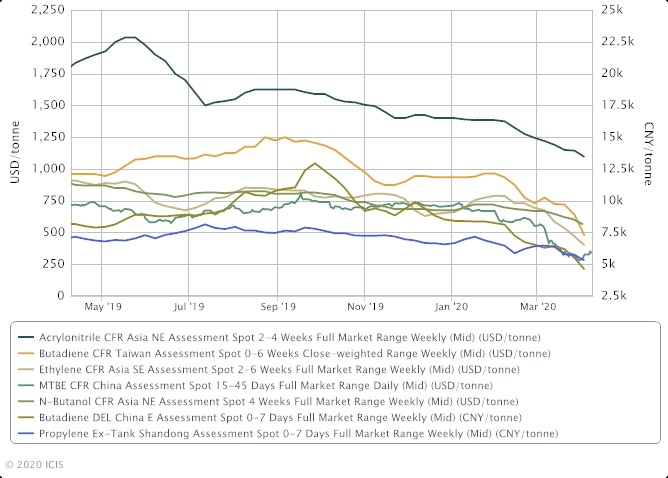 Visit the ICIS
Coronavirus topic
page for analysis of the
impact on chemical markets and links to latest
news. 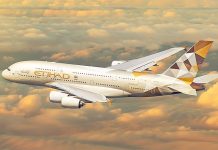 Etihad to connect 20 more cities in Europe, Asia and Australia via Abu Dhabi from 10 June

Legislating for the People from home during COVID-19