A GIRL was dragged out of a car and raped at knifepoint by 20 men on a busy street in Sudan.

The horrific attack took place on New Year’s Eve in broad daylight on the busy Nile Street in Khartoum and has sparked an online movement as people across the world shared their outrage.

The girl, whose exact age was not specified, was dragged out of the car she was in by 20 men who had made their way down the street.

Nile Street is home to many of the city’s most important buildings and runs alongside the River Nile.

The victim was then raped by the gang of men at knifepoint, as a despairing male relative tried to rescue her before being beaten himself, it has been reported.

Despite the attack taking place on December 31, local media have only just reported on the incident.

It has sparked a wave of anger amongst the local community and across the world, prompting numerous artists to create artwork highlighting the issue.

In one example, numerous hands can be seen covering and grasping at the figure of a woman.

Twitter users used hashtags including #itsnotokay and #wearewithyou in a show of solidarity, which became a trending topic in Sudan, Egypt, UAE, Saudi Arabia and Qatar.

“After what happened on NYE I’ve never felt more unsafe in my life to simply walk in front of my house ALONE in DAYLIGHT. Women should not have to live in constant fear #wearewithyou,” @ceganka wrote.

@maysamfarid added: “A woman might choose to wear nothing and yet not a single man should even be able to lay a finger on her without her consent because she still holds the autonomy over her OWN BODY! #itsnotokay.”

@smrhydb posted, “As a woman it’s so tiring having these same conversations and hashtags over and over and over again hoping that it brings about change. But I’m hopeful someday it will #itsnotokay.”

However, despite the widespread outrage and social media protests, there has been little reaction from officials.

It is not clear whether local authorities are investigating the incident.

Some online users claimed the incident was not the first time the victim was raped, while others took the opportunity to encourage victims to report their abusers and force change in the country.

Many called for authorities to implement tougher penalties for those carrying out such attacks.

CCTV shows air stewardess moments before she was ‘gang-raped & killed’

Women and girls in Sudan suffer from among the highest levels of physical and sexual violence in the world.

The coronavirus pandemic has further heightened the risks of sexual violence against vulnerable girls and women in Sudan, according to child rights and humanitarian organisation Plan International. 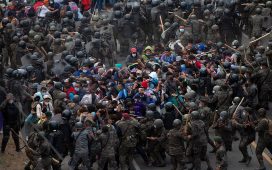