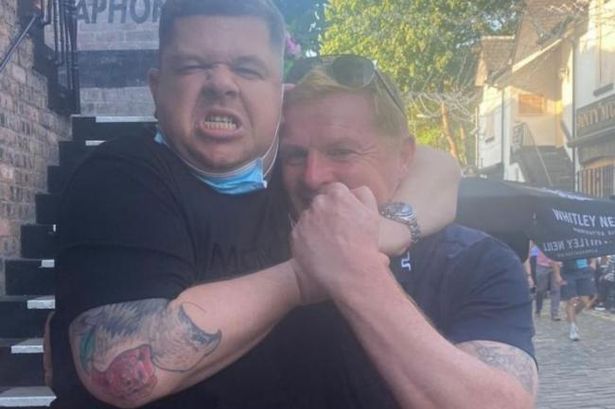 Rangers-daft Grado has been spotted joking around with former Hoops boss Neil Lennon in Glasgow.

The pair were snapped outside a pub on Ashton Lane in the city’s swanky west end yesterday.

A picture, shared on Grado’s Instagram story, shows the Scottish wrestling superstar playfully putting the Parkhead great into a headlock.

It appears that they were getting themselves reacquainted with one another – after Grado made quite the impression on Lennon’s Hibs side when he visited Easter Road in 2017.

The Scots Squad actor took on former Hibs striker Jason Cummings in a hilarious wrestling match in the team’s canteen at the time.

Lennon was left bemused as footage from the slobber-knocker showed the gaffer cheering the pair on.

The 50-year-old is currently enjoying some time off after he left his role as Celtic boss earlier this year as the club fell behind Rangers at the top of the Premiership table.

Steven Gerrard’s Ibrox side were able to scoop the club’s first top tier trophy in a decade – denying Celtic a chance to win the illusive 10-in-a-row.