After things got heated between Roy Keane and Jamie Carragher in the Sky Sports studio, fellow pundit Gary Neville couldn’t hide his satisfaction as he posted a hilarious reaction video 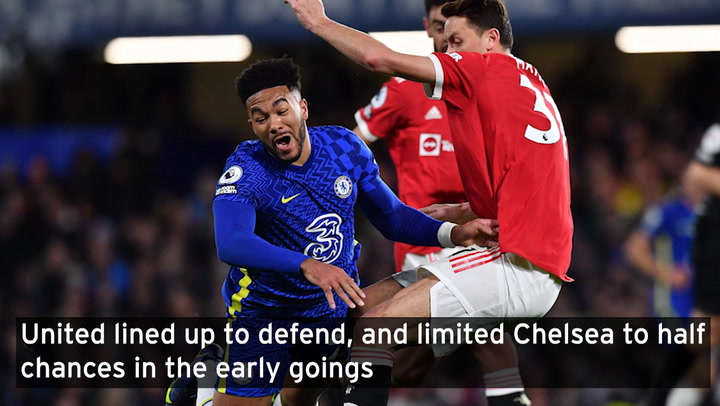 The pair were involved in an epic squabble after clashing over Manchester United icon Cristiano Ronaldo following the Red Devils’ 1-1 draw with Chelsea.

The Portuguese superstar was controversially dropped by caretaker manager Michael Carrick for United’s visit to Stamford Bridge and the decision dominated the topic of conversation in the Sky Sports studio long after the match had ended.

While the two pundits were at loggerheads, it didn’t take long for Neville to take to social media and publicly share his reaction with some hilarious footage.

The former United captain uploaded a video of himself cracking up with laughter in the foreground while colleagues Keane and Carragher fiercely argued on a big screen behind him.

As the enraged duo gesticulated and raised their voices during the lengthy debate, Neville looked visibly entertained as he watched on from the comfort of his own home.

Keane then jumped to his former teammate Ronaldo’s defence amid Carragher’s suggestions that the legendary United number seven has no right to start every game.

“It’s not as if he hasn’t scored and he’s not interested, he’s on it but then he’s getting the blame for the high press,” Keane said about Ronaldo.

“He’s not pressed for five or six years. He’s not going to fix United’s problem but you don’t bring Ronaldo back to sit on the bench. You think Rashford pressed today? He did nothing today. Stats have taken over the world – his stats coming back to united are good.”

HAVE YOUR SAY! Was Michael Carrick right to drop Cristiano Ronaldo for the Chelsea match? Comment below

The pair then embarked on a remarkable tit-for-tat, as noted below:

Keane shot back: “What’s the game about? Scoring goals! You talk about Salah the games about goals Jamie! Ian Rush what did he do? He scored goals.”

“Did he press?” Carragher replied.

Keane said: “Yeah, but he didn’t score as many as Ronaldo!”

“He’s a phenomenon in terms of goals,” Carragher said. “But I mentioned this in midweek. PSG signed Messi and United signed Ronaldo. Are United closer to the title? No. Are PSG closer to the Champions League with Messi? No.”

Keane responded: “Ronaldo was never going to get United back to winning titles.”

The two continued in a similar vein, getting progressively more angry, before they got back into snappy responses.

“He’s not come back to win the league,” Keane said.

Carragher: “So what’s he come back for?! What’s he here for then?”

Keane: “When you won the FA Cup were you not buzzing with that? United are a cup team at the moment.”

Carragher: “You said Ronaldo hasn’t come to win the League, what is he here for?!”

Carragher: “Is that where Man United are now?”

Carragher: “So you’re happy with that?”