Andy Jones, who has run Jones and Son restaurant in Dalston, north London, has called Prime Minister Boris Johnson a liar and urged people to “stand up to this guy” 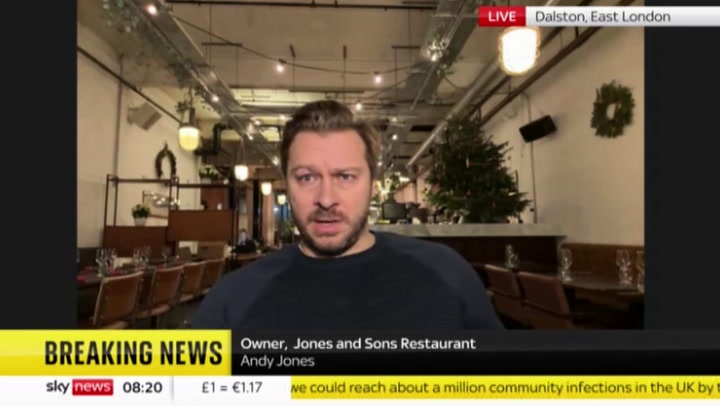 Restaurant owner fumes at Boris Johnson over Plan B restrictions

A furious restaurant owner has blasted Boris Johnson for ‘decimating’ the hospitality industry ahead of Christmas.

Andy Jones, who has run Jones and Son restaurant in Dalston, north London since 2013, pulled no punches when he laid into the Prime Minister this morning.

The business owner urged the Tory leader to let him “trade without restrictions” after Johnson announced Plan B Covid rules would be introduced to slow the spread of Omicron.

The hospitality industry is already feeling the impact of plans to introduce vaccine passports for certain venues and the work from home directive, which will drastically cut impromptu trips to pubs and clubs.

Will you be impacted by the new Covid rules? Email webnews@mirror.co.uk

Mr Jones said his business would lose out on £42,000 in one week alone after three of the four large Christmas parties he had booked in cancelled.

The financial impact comes after he hired extra staff to deal with the expected Christmas rush, only to be “slammed again” by coronavirus restrictions.

“It is decimating our industry at the most important time of the year. I don’t know why we are listening to this guy who is a liar and a coward and is refusing to answer questions. It is beyond belief.”

Mr Jones claimed the PM was “killing so many industries in this country” by “putting the fear of the Omicron variant into people.

“He is just not playing ball with his country anymore,” he continued.

“He has got to go. I don’t believe a word he says anymore.”

Mr Jones said he did not want financial support from the Government, but to be able to run his business profitably.

He said: “I don’t want handouts, I just want to be able to trade without restriction.”

After Johnson announced that Plan B would come into force in next week, hospitality industry leaders have come out in their droves to sound the alarm.

The Night Time Industries Association said the restrictions would have a “devastating impact” on demand.

Andy Jones has lambasted the Government for its coronavirus measures
(

Chief executive Michael Kill questioned the “timing and rationale” of the announcement, suggesting it was connected to the Christmas party allegations.

“Nightclubs and bars must not be thrown under the bus for the prime minister to save his own skin,” Mr Kill said.

Under the restrictions, face masks must be worn in most indoor venues, including theatres and cinemas, from Friday.

Other measures are due to come into force next week.

While bars and restaurants won’t be impacted by the face covering rules, many in the industry are concerned about the impact other restrictions will have on demand.

Emma McClarkin, chief executive of the British Beer & Pub Association, said: “Make no mistake, this (Plan B) is a huge blow for our sector as it further undermines consumer confidence and is devastating for pubs based near offices and in town centres.”

The Government is introducing additional coronavirus measures due to the emergence of the Omicron variant.

While much analysis of the mutant strain is yet to be carried out, there are concerns it may be able to evade the vaccine more than other variants.

Scientific advisers from SAGE, the government advisory group, believe that Omicron infections in the UK are on course to double every three days.

Speaking on BBC Radio 4’s Today programme, SAGE’s Professor Neil Ferguson said: “[Omicron] is likely to overtake Delta before Christmas at this rate, precisely when is hard to say.”