A full UK lockdown is needed to prevent an early 2021 ‘catastrophe’, a Government scientist has warned.

Andrew Hayward, professor of infectious diseases epidemiology at University College London, warned the country was “entering a very dangerous phase of the pandemic” and said “decisive” action was needed.

Speaking to BBC Radio 4’s Today programme Professor Hayward said: “I think we are entering a very dangerous new phase of the pandemic and we’re going to need decisive, early, national action to prevent a catastrophe in January and February.

“A 50% increase in transmissibility means that the previous levels of restrictions that worked before won’t work now, and so Tier 4 restrictions are likely to be necessary or even higher than that.

“I think we’re really looking at a situation where we’re moving into near lockdown, but we’ve got to learn the lessons from the first lockdown.”

He added the rise in cases was “very largely driven” by the new, more infectious variant of coronavirus, and suggested that allowing pupils to return to schools would mean stricter restrictions in other areas of society.

Prof Hayward added: “We’ve had control measures that were previously controlling the old variant are not enough for this variant.

“And so if we want to control the new variant we are going to need much tighter restrictions.”

“We need to be more or less in a similar sort of messages of stay at home unless you really, really have to, so there’s that combined with incentivisation of testing, incentivisation of isolation – those sorts of things that will carry us through the next few months while we get as many people as possible vaccinated.”

His warning comes after figures revealed yesterday England now more Covid-19 patients in NHS hospitals in England than during the peak of the first wave in April, new figures have revealed.

The NHS England data shows there were 20,426 patients in NHS hospitals in England as of 8am on Monday, compared to the 18,974 patients recorded on April 12.

The number of further lab-confirmed cases of coronavirus recorded in a single day in the UK also hit a new high of 41,385 as of 9am Monday, according to Government figures.

Dr Yvonne Doyle, medical director at Public Health England, said: “This very high level of infection is of growing concern at a time when our hospitals are at their most vulnerable, with new admissions rising in many regions.”

The figures come amid warnings that hospitals in the South are facing a rise in pressure due to the increasing number of coronavirus patients. 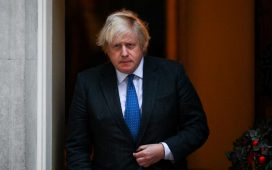 Office drinking culture slowed down in the 90s. But not for journalists – and now they are running the country | Zoe Williams

The rise and rise of Liz Truss