NEWSCABAL > education > From the archive: how to make your kids learn faster, 1970
education

From the archive: how to make your kids learn faster, 1970


‘Can you make your child brighter?’ asked the Observer Magazine of 13 September 1970, tapping into the anxieties of middle-class parents. Joy Scully charted the ‘often neglected first five years’ and described ‘some of the ways parents can help their children to realise their inborn potentialities’.

You can’t make your baby walk, however many lurching hours he spends in a baby-walker

Scully addressed the pressures parents put on babies to walk. ‘You can’t make it happen, however many lurching hours he spends in a baby-walker,’ she said, ‘and you can only impede it happening by subjecting the child to the most appalling constriction, like tying him down in a cot or to a table leg for weeks on end.’

Scully said the trend of mobiles and cot toys started with an experiment some years previously that was carried out with ‘institutionalised babies’ who were ‘more apathetic and lethargic than babies in normal homes’. Someone had the idea of ‘having bright, interesting objects and mobiles on their cots’ which resulted in the babies gurgling and cooing.

The Initial Teaching Alphabet system was ‘the latest, and possibly most far-reaching, attempt in a long line of experiments to improve reading ability in infant and primary schools’. (It didn’t last very long.)

There was also Words in Colour invented by Dr Caleb Gattegno. ‘He analysed the language into 47 constituent sounds and allotted each one a colour,’ but ‘since 47 distinct colours do not exist, different shades are used and some letters are two-toned with the top half in one colour and the bottom in another.’

‘Until recently,’ wrote Scully, ‘it was thought that children under the age of six were not sufficiently mature… to begin reading.’ Even more shocking, ‘as many as 60% of today’s school leavers will never look at another book in their lives’. Though perhaps that’s understandable if it’s in two-toned multicoloured text. 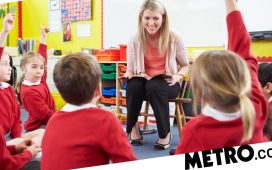