Q) OUR six-month-old, short-haired tabby kitten called PJ is very loving to me but my husband can’t get near him to pet or stroke him.

We have had PJ for about four months but he always runs away from my husband Mick in the garden.

Is there anything Mick can do to improve this sad situation?

Sean says: Is your husband a dog person, by any chance?

If he does not understand the subtle differences between cats and dogs, he might be coming across as forceful or overbearing for attention — which is something most cats just don’t enjoy.

Find out what treats PJ simply cannot resist. Allowing PJ to come to him, using lure toys or laser pointers to attract him to play remotely at a distance first, could also help.

It is all about building positive associations, being super-gentle and only stroking or touching PJ when he initiates that contact.

Running after him in the garden to give him love will just drive him away. Play it cool, Mick!

Q) OUR English bulldog Buster, whom we have had since he was a puppy, simply will not go for a walk.

He is nearly five and has been like this all the time.

If we mention a “walk”, he starts licking his lips then crawls back to his bed. We have tried everything but we have never tried forcing him. Please help.

Sean says: How is Buster’s breathing? English bulldogs can be prone to a condition called Boas (brachycephalic obstructive airway syndrome).

That is a long-winded way of saying their flat faces and the anatomy of their noses and throats means they struggle to breathe very well.

For some dogs, it can mean they are less tolerant of even mild exercise — and it can cause greater anxiety than for dogs with more natural-shaped faces.

For Buster, I would strongly recommend having him screened by a Boas-experienced vet.

Q) I TOOK in a neglected cat a couple of years ago. She is called Donut and I love her.

I believe she was the runt of the litter. People said that I couldn’t train her to be loving, but I did and she’s my baby.

Anyway, she eats twice as much as most cats and eats all day — so why does she stay so tiny? 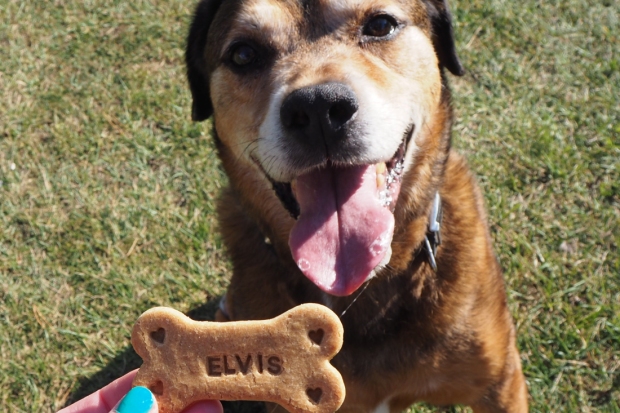 MAKE your pup feel part of the celebrations this Christmas with their own treats.

We have six bundles including doggy doughnuts, personalised bone biscuits and cinnamon bites for the Christmas tree from Queens of the Bone Age, an artisan pet bakery.

Delight your dog with the natural, wheat-free goodies, made from human-grade ingredients and each bundle worth £43.

To enter, send an email marked BISCUITS to sundaypets@the-sun. co.uk before December 12.

Sean says: Well done on giving her a home — she sounds like a sweet little cat.
Like us, cats are all different genetically.

Some burn calories fast and never gain excess weight, others pile on the pounds with only a little excess food. It’s all about metabolism, in most cases.

However, there are a few medical conditions that can cause similar signs.

An over-active thyroid is a common cause of excess hunger and weight-loss in middle-aged to older cats.

Liver or intestinal problems could also be at play, so if you are worried, or if Donut is losing weight or seems unwell, a vet check and blood test might be a good place to start.

STAR OF THE WEEK

And as his coat is so fluffy, diving into the sea helps to cool him down.

Amanda, 46, a kids’ TV producer from Poole, Dorset, says that as well as being adventurous, Billy also has a caring side, supporting her when she lost her mum to dementia in 2016.

She said: “Sea swimming is my passion so being able to share it with Billy is wonderful.

“We’re able to bond and he loves the water.

“Billy was there for my mum when she lost my dad and really helped her when she struggled with dementia.

“He gave her a lift and was such a support for me when mum passed away. Billy is an absolute rock.”

CAT lovers thinking of welcoming a new feline friend this Christmas are being warned not to shop online because unscrupulous dealers are selling sick pets.

Samantha Webb, 32, from Truro, Cornwall, bought Franky after seeing him on Facebook.

She said: “I saw playful kittens with a caption saying ‘ten-week-old kittens ready to go, mum can be seen’.

“But I was handed a frail and limp kitten who wouldn’t open his eyes. I paid £30 to get him out and to the vet.

“He was four weeks old and had a neurological condition called cerebellar hypoplasia as his mum had a virus during pregnancy.”

Cats Protection found 340,000 cats were bought on the internet in the last year, accounting for 68 per cent of all cats purchased.

It is now launching a campaign called Eight Precious Weeks – which is how long kittens should stay with their mum – to tackle misselling.

Senior advocacy officer Madison Rogers said: “Some sellers online are prepared to put profit before welfare, and unsuspecting buyers are left with a very poorly kitten.”

If you are thinking of buying a kitten, first check out cats.org.uk/support-us/eight-weeks.