‘From one hell to another’: No swift return from Russia for Ukraine’s defenders of Mariupol


Pastor Yuriy considers himself to be a man of strong belief, but admits that a war which is taking an immense toll on Ukraine is testing his faith like never before.

Russia’s invasion has brought destruction to swathes of Ukraine, grief to thousands of families who have lost people on the battlefield or to indiscriminate bombing, and a terrible uncertainty to those like Yuriy whose loved ones have fallen into enemy hands.

Neither side will reveal how many of its soldiers have been killed, wounded or captured, but Russia says it detained some 2,500 Ukrainian troops in May when they finally surrendered their last redoubt in the eastern city of Mariupol after a brutal 10-week siege.

Yuriy’s son Mark (19) was among those who defended the vast Azovstal factory to the end, saw many comrades killed and injured, and whose fate now rests with an enemy state where prisoners’ rights count for little and international pressure has scant effect.

Yuriy – who doesn’t want his family’s surname to be published for fear of jeopardising Mark’s safety and chances of release – last heard from him about a week before Ukraine ordered Azovstal’s defenders to lay down their arms on May 17th.

“Psychologically, Mark was quite ready to defend his people and country but he was not an experienced fighter,” says Yuriy, who preaches at a Protestant church in the town of Zhmerynka in central Ukraine.

“This was his first combat and he saw friends dying before his eyes. He told me that 10 of them were on a mission one day, and there was shooting. They were probably all young because seven of them were paralysed with fear, while Mark and two others started shooting back, moving, changing positions,” Yuriy says.

“And then the place where Mark had been, and where seven of them still were, was hit by a shell and they were killed. Mark suffered concussion but was able to carry one of his friends away from there.”

Dad, I believe I will go to God’s kingdom. But I don’t want to die in a bunker, I’d rather die on the battlefield

That was somewhere in the city of Mariupol, the strategic port on the Azov Sea where Ukraine says tens of thousands of civilians were killed in weeks of Russian bombing, prompting troops and civilians alike to head into the bunkers and tunnels of Azovstal.

Yuriy says the “real hell” began there, where thousands of people were trapped for weeks as food and water supplies dwindled, intense shelling pummelled the Soviet-era factory, and casualties mounted, forcing doctors to perform amputations and other life-saving surgery in a makeshift field hospital.

“It’s a long time to be underground, under massive shelling all the time, when nothing depends on you. You can only sit and listen as it gets louder or quieter, and watch the walls crumbling,” Yuriy says of what he was told by Mark, a border guard who suffered two shrapnel injuries in Azovstal.

“He said things like ‘Dad, we’ll hold out,’ and I know he was trying to reassure me. That was his spirit and morale talking. But at the same time, I heard what almost sounded like his parting words, and he said ‘Dad, I don’t want you ever to see anything like this.

“The death of his comrades was really tough for him… At one point a bunker took a direct hit and Mark said all the guys there were buried under concrete. They couldn’t get them out,” Yuriy recalls.

“He said, ‘Tell everyone I was fighting for our freedom.’ Then he said, ‘Dad, I believe I will go to God’s kingdom. But I don’t want to die in a bunker, I’d rather die on the battlefield.’”

Mark’s ordeal, shared through almost daily calls and texts via Telegram, made Yuriy feel “total helplessness for the first time in my life”.

That feeling remains since the surrender of Azovstal, when its defenders filed out of the plant and into captivity after being told they had completed their mission by tying up Russian troops for many weeks, and president Volodymyr Zelenskiy said Ukraine “needs [its] heroes alive. To get the boys home, the work goes on, and it takes delicacy and time”.

Yuriy knows only that Mark left Azovstal alive and was taken with many other prisoners to Olenivka, near Donetsk in occupied eastern Ukraine.

Along with thousands of families of other captured and missing soldiers, Mark’s father and siblings have tried to glean clues about his fate from Russia’s propaganda-soaked state and social media, and are almost certain they caught a glimpse of him in Russian television footage showing Ukrainian troops being searched as they left Azovstal.

“I thought of going there [to occupied territory] myself to try to get him out, but of course I realised this is unrealistic. They could put me in jail and it won’t get him released,” says Yuriy, who like millions of Ukrainians has relatives and other contacts in Russia.

“I can’t imagine now what is happening to my son in captivity, because I know he’s not a flatterer and he speaks his mind. We travelled together to Norway and other places, and he has a taste for freedom.”

The United Nations and International Committee of the Red Cross (ICRC) helped facilitate the evacuation of civilians from Azovstal, and the ICRC said it subsequently registered “hundreds” of Ukrainian soldiers as prisoners of war as they left the factory.

United Nations human rights officials should be monitoring what’s going on, because it’s clear the soldiers’ rights are being violated

The involvement of the two agencies, coupled with initial comments from some Kyiv officials suggesting a deal to bring home the Azovstal defenders had been agreed, raised hopes of their swift return, but now frustration is growing as almost all the captives languish in Russian jails, with little or no contact with relatives and no clear prospect of release.

Relatives of Ukrainian detainees say reports they have received suggest Russia is holding them in squalid and overcrowded cells and subjecting them to physical and psychological abuse, and Moscow politicians have called for some prisoners to be barred from any exchange, tried as terrorists and even made subject to the death penalty.

[ ‘This is where I have to be’: Irish farmer in Ukraine forges on through Russia’s war and grain blockade ]

The ICRC says it has been able to visit some prisoners of war – but not all, as the Geneva Conventions demand – and is pushing for full access in Russia and Ukraine. It has informed almost 1,800 families in the two countries about the whereabouts of relatives captured since February, and passed messages between some detainees and their families.

Spokesman Florian Seriex explained that any deal between Russia and Ukraine on the Azovstal defenders or other detainees “is not something made with the ICRC – it is made between the parties to the conflict and then the ICRC can facilitate and support [it]”.

Anything “discussed between the parties on a swap or exchange … is not something we are aware of,” he said, adding that the ICRC has not played a role in any of several relatively small-scale prisoner swaps that have taken place since Russia’s full-scale invasion.

The biggest such exchange took place last week, when each side freed 144 prisoners; Kyiv’s military intelligence agency said most of the Ukrainians who came home were badly injured, and included 95 of the soldiers who defended the Mariupol steelworks.

Wives, mothers, girlfriends and sisters of the Azovstal fighters – some of whom say they are receiving calls and messages from Russian phone numbers threatening rape and murder – have formed a group called Women of Steel to press for their release.

“The Red Cross promised to check the wellbeing of all the prisoners but it’s not doing it, because it’s not allowed to do it. I don’t see it as being influential or able to solve this issue with Russia,” says Sandra Krotevych, whose brother Bohdan defended Azovstal.

“And United Nations human rights officials should be monitoring what’s going on, because it’s clear the soldiers’ rights are being violated – they’re being kept in inhuman conditions and subjected to inhuman treatment, but the UN is doing nothing there.”

A major in the Azov regiment that led the defence of Azovstal, Bohdan Krotevych (29) attracted a large following on social media with his comments on the war and a clip of him nonchalantly puffing on a cigarette as Russian shells crashed into the ruined factory.

“I know nothing concrete about what’s happening to him. Our last contact was on May 20th when all the commanders left Azovstal … but absolutely nothing since then,” Sandra says.

“Emotionally he was down, because he was a senior officer and for nearly three months they’d had shortages of food, been constantly under shells and bombing, and lots of guys had died and been injured… And now they’ve gone from one hell to another.”

I am sure of my son’s motivation. I know that he is suffering now for his family, for his country and for his nation

The Women of Steel want international agencies and western leaders to do more to help Ukraine bring its captured soldiers home, because, as Sandra puts it, “Russia lies – Russia is always promising something and not keeping its promise”.

Many Protestant families in the officially atheist Soviet Union were strongly pacifist, and Yuriy’s was no different, but since Russia’s full-scale invasion he says his “thinking has changed completely, because our army is not one of aggression but of defence”.

Now he finds himself praying for more western weapons for Ukraine including the US-made Javelin anti-tank missile, and seeing new meanings in Bible verses such as Psalm 35, which in some translations calls on God to “brandish spear and javelin against those who pursue me”.

Yuriy admits that Ukraine’s agony is a challenge to his faith, and he has “a desire to cry out to God with my whole heart and say, ‘Let your justice prevail’”.

When Mark was drafted in 2020, he and his father prayed in church on the way to the enlistment office, and Yuriy thinks his son’s faith remains strong.

“I am sure of my son’s motivation. I know that he is suffering now for his family, for his country and for his nation,” Yuriy says.

“Every day people send me texts and Bible verses and tell me they can’t wait to welcome him back and hug him. I have a very strong sense that he is my son, and that they are all also sons of Ukraine.” 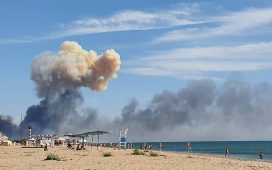 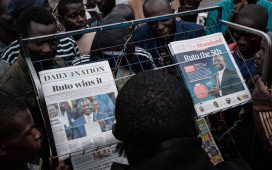 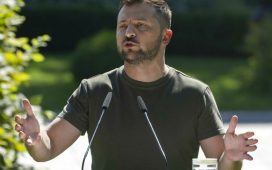