French fishermen have blamed British ‘looters’ and Brexit for the Trafalgar-style ‘Scallops War’ in the English Channel.

It follows a ferocious engagement on Tuesday that saw vessels being rammed, emergency flares used as weapons, and bottles and rocks thrown.

The French – who are banned by their own government from touching the mollusks between May and October – accuse the British of greedily hoovering up as many as they can.

Now Dimitri Rogoff, the President of the Normandy Regional Fisheries Committee, has stepped up the confrontation in a series of outspoken interviews with French media.

He said it was becoming “more complicated to talk to the English” because of Brexit , and that previous informal deals with ‘the looters’ were being ignored.

Mr Rogoff said: ‘This tension returns because we’ve not managed to find a satisfactory agreement with the British on the sharing of scallops.

“We have two totally different flotillas. On one side are the small Norman boats, and on the other side, factory ships which come from Scotland freezing scallops on board.

“This is about looting. We have been talking for years to try to share better, but we cannot do it currently.’

While previous agreements were reached informally, there were serious problems this year.

“The problem is that the scallop is not a species managed by Europe and subject to quotas,’ said Mr Rogoff.

“Each country does what it likes. And suddenly, some fishermen are concentrating on this species because it’s easier and freer.

“The solution is to get along with your neighbours, but with the Brexit coming, it’s more complicated to talk to the English.”

Talking about the day when Britain officially leaves the EU next year, Mr Rogoff said: “Ideally, on March 29, if Brexit is introduced, the English sailors will not be able to come because they will be excluded from the community waters, but it will also present other problems for our boats.”

The confrontation on Tuesday was between around five UK boats and 40 French ones, just off the coast of Normandy.

There are now fears that the British will return , and the French have pledged to do everything possible to stop them.

‘We will go out to see the English again soon,’ said Mr Rogoff, adding: ‘We do not want to prevent them from working, it is not a war, but they have to move away from territorial waters and stay north of 20 miles.’

Lt Ingrid Parrot, of the French Maritime Gendarmerie in Normandy, said fighting went on for just under an hour on Tuesday, before the police intervened. There were no arrests, or serous injuries, said Lt Parrot.

She said three boats reported holes in their hulls. 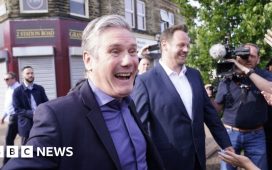