Frasers Group forecasts profits to jump by up to 45%


Shares in Frasers Group jumped to their highest level in more than a decade after the retailer said it expects profit in the current year to rise by up to 45 per cent, as it seeks to open new stores.

Michael Murray, the group’s new chief executive, said the positive outlook was based on heavy investment in productivity improvements at its main supply centre, store openings, and improved relations with key brands.

The company, which owns the Sports Direct, House of Fraser and Flannels brands, said adjusted profits could climb to £450mn-500mn this year as a result. Shares closed 26 per cent higher at 940p, their highest in more than 10 years.

“This hasn’t happened overnight. We’ve been working hard and investing for a number of years,” said Murray, who is also the son-in-law of founder Mike Ashley. “It was a crawl-walk-run strategy and we are running now — you might even say sprinting.”

Frasers had not updated investors since its half-year results last December, when it predicted adjusted pre-tax profits of £300-£350mn for the year to the end of April.

On Thursday it reported adjusted profit of £344mn for the year just ended, on sales of £4.75bn. That was ahead of analysts’ expectations, which were at the bottom end of the company’s forecast range.

Murray acknowledged there were risks to such an optimistic forecast, flagging the continued stand-off between the retail industry and the government over business rates, and escalating construction and refurbishment costs as it opens new stores.

“It is getting harder to sign off on new leases unless we get a contribution to fit-out costs from landlords,” he said. Murray thought Frasers could open around 100 of its high-end Flannels fashion stores in the medium term. It currently has 53.

Revenue in the premium lifestyle division, which includes Flannels, rose 43 per cent in the period and topped £1bn for the first time. Murray acknowledged that House of Fraser, which the group acquired out of administration in 2018, had been “a drag on the business” but that a new operating model with smaller stores was delivering “green shoots”.

However, the core UK sportswear business remains the main driver, with revenue rising by a third to £2.5bn. Adjusted pre-tax profit of £200mn accounted for almost a third of the group total.

“The brand support has been key,” said Murray. “We have got the products consumers want, from value to superelevated.” 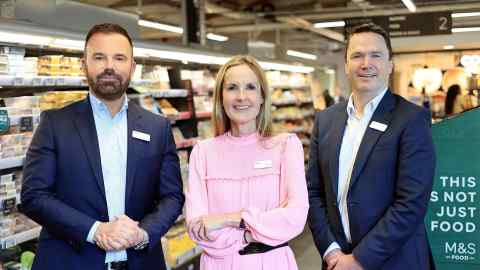 RBC analyst Richard Chamberlain said the guidance was unexpectedly strong and that the Sports Direct brand would probably continue to thrive as a low-priced retailer in a tougher consumer environment.

However, he cautioned it would face increased costs as a result of the stronger dollar, while expanding Flannels would become more challenging as it moves beyond regional UK cities.