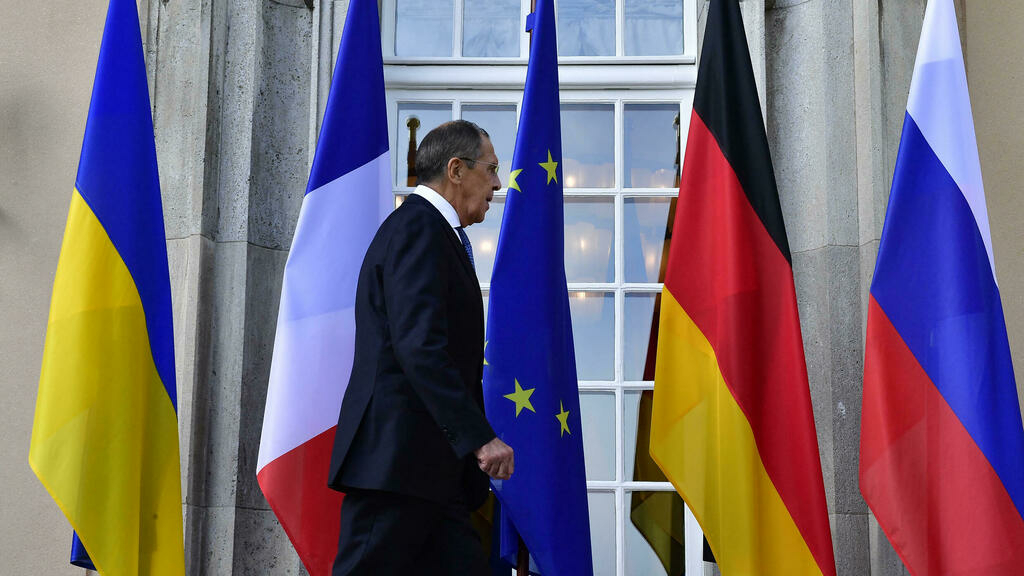 Russian and Ukrainian negotiators met in Paris Wednesday, along with French and German advisers, in a bid to defuse soaring tensions over the Ukraine crisis, with Paris seeking to usher both sides down a “path to de-escalation”.

The high-level meeting brought together representatives of the four countries under the so-called Normandy Format, which has been used repeatedly since Russia’s 2014 annexation of the Ukrainian province of Crimea.

Russia was represented by the Kremlin’s deputy chief of staff, Dmitry Kozak, and Ukraine by presidential adviser Andriy Yermak, with advisers to President Emmanuel Macron and German Chancellor Olaf Scholz also taking part in the talks that began Wednesday morning.

At a joint press conference with Scholz in Paris on Tuesday, Macron said France and Germany were ready to pursue dialogue with Russia, but if Moscow attacked Ukraine the price would be “very high“.

France is hoping that Russia is prepared to engage in talks at a time when it has massed 100,000 troops on Ukraine’s border.

“It’s very encouraging that the Russians agreed to enter into this diplomatic format again, the only one in which the Russians are stakeholders,” an aide to Macron said on Wednesday on condition of anonymity.

“This meeting will give us a clear indication of the Russians’ mindset before the call between Emmanuel Macron and Russian President Vladimir Putin on Friday,” the aide added.

Each side is expected to brief the media later in the day.

Separate talks between Russia and the US have been held in recent weeks to discuss Moscow’s security demands in Europe, including that Ukraine should never become a member of the US-led NATO military alliance.

After discussions last Friday in Geneva, US Secretary of State Antony Blinken promised his Russian counterpart Sergei Lavrov that Washington would give a written response to Russian demands and also floated the idea of a presidential meeting.

US President Joe Biden warned Tuesday of personal sanctions on Putin, while the White House says the risk of a Russian invasion of Ukraine “remains imminent”.

The US this week said around 8,500 American troops were put on heightened alert and were awaiting orders to deploy to the region.

Responding to the warnings, Russia on Wednesday said it would quickly take “retaliatory measures” if the US and its allies reject its security demands over NATO and Ukraine.

Speaking to Russian lawmakers, Lavrov said he and other top officials would advise Putin on the next steps after receiving written replies from the US. Those answers are expected this week – even though the US and its allies have already made clear they will reject Russia’s top demands.

“If the West continues its aggressive course, Moscow will take the necessary retaliatory measures,” Lavrov said.

But he indicated Russia would not wait forever. “We won’t allow our proposals to be drowned in endless discussions,” he said.

He mocked fears of an imminent invasion, saying that “our Western colleagues have driven themselves up into a militarist frenzy,” adding sardonically that “the Ukrainian elite itself has grown a bit scared by the Western scare.”

The talks in Paris on Wednesday come as Western powers keep up their warnings of massive economic sanctions in the event of a Russian attack on pro-Western Ukraine.

Concerned about the rhetoric in Washington and London, and their decision to withdraw some embassy staff and families in Kyiv, an aide to Macron warned on Monday about “creating any ambiguity or creating any additional volatility.”

“We want a de-escalation, which means both dialogue and dissuasion,” the aide said on Wednesday.

“Discussions about sanctions with our European and American partners, with institutions, is taking place to ensure that this dissuasion is sufficiently credible, so that the dialogue is credible. They are linked,” the aide added.

“But the sanctions must not lead to retaliation that will boomerang on us and have a cost,” the aide said. “Sanctions are not be-all and end-all of the response.”

The US has also been drawing up plans to shore up European gas supply should Russia cut off shipments through its pipelines in response to Western sanctions.

The White House announced Tuesday that Biden would meet with the emir of gas-rich Qatar, Sheikh Tamim bin Hamad Al Thani, on January 31 to discuss, among other issues, “ensuring the stability of global energy supplies”.

The French plan, as detailed by an aide to Macron, would entail both sides taking steps to build confidence.

Ukraine’s government has made the first move envisaged by the French by withdrawing a bill in parliament governing the status of Russian-backed separatist provinces in the east of the country, which Moscow sees as violating previous commitments.

Paris is hoping that Russia will agree to some “humanitarian measures” such as prisoner exchanges in eastern Ukraine and the opening of checkpoints manned by the separatists.

France also would push for “a public statement from the Russians about their intentions that reassures everyone,” the aide said.

One major possible area of discord is France’s backing for talks between the Ukrainian government and Russian-backed separatists in the east – something Ukrainian President Volodymyr Zelensky has refused to do.

The leaders last met for a four-way summit in Paris in December 2019.