The architecture studio designed the extension to follow the construction ideals of the original house, which forms part of a development of homes that were self-built following the Segal Method – a modular timber-frame system that is easy to construct and dismantle.

“The client had a limited budget so we wanted to design and build something that was affordable and accessible,” explained Fraher & Findlay founder Lizzie Webster.

“The principles of building with readily available off the shelf products and the reduction of specialist trades meant that the costs could be kept manageable whilst the homeowner had the chance to manage the build with easy access to a build team,” she told Dezeen.

The renovation added a dedicated study space for the home’s photographer owner, enlarged the kitchen, created a den space and improved the house’s connection to the garden.

This was largely achieved by adding a double-height timber extension to the side of the single storey-property, which increased the feeling of space within the single-storey home.

“The side extension – although narrow – provides double-height space that stretches out the dining room and kitchen,” said Webster.

“As these buildings are so lateral, the introduction of a taller space makes the single-storey building feel much bigger.”

The 1.2-metre-wide extension that is finished with plywood contains a set of stairs that leads down to a new lower-ground floor space that contains a snug under the existing house and a home office.

READ  'Robot' building in Kaliningrad to be demolished next year

“This was only a small extension, but this breadth ensures that the new level to the house feels connected with the existing building,” she continued.

“It provides a dedicated workspace for both parents away from the living spaces and not in the bedroom, which in a Covid world is key.”

This space is situated on the same level as the home’s garden and a new rear door provides direct access to it.

“Due to the topography, the house had an amazing view but a poor connection to the rear garden as it was a separate level – the extension connects the living spaces more successfully to the garden,” added Webster.

It was clad in black, profiled metal sheets that are combined with blue window surrounds to create an inverted version of the original home’s cladding, which is blue with black detailing.

The owner managed the construction of the home in collaboration with the architecture studio. To ensure that costs were kept low, and to align with the home’s original ideas, many of the materials and finishes were chosen because they were widely available.

“We used off the shelf products such as plywood and profiled metal cladding with exposed connection details which is in line with Segal’ approach to using off the shelf materials,” said Webster. 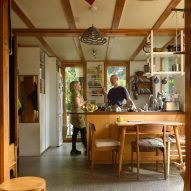 “He preferred to avoid the use of specialist trades like plasters. Internally the extension is mainly clad in plywood to avoid the plaster finish,” she continued.

“The build process was managed by the client – the houses were originally built by hand by their owners – so their direct involvement with the process gave her an involved experience with her home and spaces.”

Webster believes that Segal’s ideals still have relevance today, and should inform how we look at architecture.

“Segal’s approach was all about using design to empower people to make and create their own spaces,” she added.

“His approach looked to make design accessible and affordable and flexible – this should be the future approach to how we build spaces – looking at how to create spaces that are meaningful and the users have a unique and direct relationship with.”

The home is on Segal Close in south London, one of two major groupings of homes designed following the Segal Method, the other being Walters Way. As part of Dezeen’s collaboration with this year’s Open House London festival we published a video tour of the 13 self-build houses in Walters Way.

“One of the fundamental principles of the Segal process is that houses are flexible to adapt to you, and you don’t have to adapt to a prescribed house,” said a resident in the film.

Photography is by Taran Wilkhu.