Rev. Fr. Camillus Ejike Mbaka, founder and spiritual director of the Adoration Ministry, Enugu Nigeria (AMEN), is dominating the media space again.  He is indeed on every lip, and often discussed.

Give it to those who follow him, he is a maverick of some sort – very enigmatic and he acts like one.

Just some days ago, Fr. Mbaka’s battle frontiers appeared to have elongated. Yes, as an ordained man of God, he is unarguably at war with the devil, and his machination. And there is no doubt that he has been waging a long-drawn battle. At least, the world around him can attest to that, the same for the Adoration Ministry he founded, where he has been a veritable tool in God’s hand to change the story of many.

But many on the other hand contend that over the past years, Fr. Mbaka had fared far into the partisan turf, trudging on the path angels would be cautious to tread. And one of the results is  Fr. Mbaka recently fell out with the President Muhammadu Buhari’s Presidency as he made a U-turn to speak truth to power.

It was a surprise move to those who have been following his trajectory with President Buhari, who  he helped to bring to power in 2015 by saying that he was the messiah the country needed. Therefore, Mbaka shocked Nigerians and the Presidency when in the penultimate week he proclaimed that President Buhari has failed,  calling on him to resign or be impeached. This made the Presidency to go into war of words with the fiery priest with the President’s media aide, Garba Shehu, claiming that Mbaka was angry because the Presidency rejected the three contractors he brought for contracts.

Fr. Mbaka while clarifying issues in his sermon, admitted taking some men to Aso Rock, but added: “The three men he talked about, I am not here to defend anybody’s stupid allegation, but God used that man (Shehu) to tell the world that Buhari’s government is not giving me money.

“And these are the three men that we brought that will handle insecurity for the country; they had the gadgets. The white people had the facilities. That was during the first administration.

“They said they will help them in conquering insecurity. They had the platform to end insecurity in this country under one month, under Abba Kyari (former Buhari’s late Chief of Staff). I just handed them over to the government people.”

It was this raging war of words that raised great concerns in Fr. Mbaka’s primary constituency, the Catholic Church, and probably the reason his superior, the Catholic Bishop of Enugu Diocese, His Lordship Dr Calistus Onaga summoned him to sort out a few troubling issues.

In the morning of Wednesday, May 4, the social media went literarily aflame as allegations continued to fly that the charismatic priest and preacher had gone missing, and his whereabouts were unknown.

Fr. Mbaka has this undeniable burgeoning cult following ostensibly for his miracles, which had earned him gargantuan image in the eyes of millions who follow his words and ways.

So, when a man of his spiritual stature and status was declared missing – amid the whirlwind of insecurity sweeping across the land, that was more than enough reason to drive anxiety to the point of frenzy amongst his followers.

Expectedly, all kinds of theories were ascribed to what had happened to Fr. Mbaka.

Many had gone ahead to finger the secret police, the DSS, for his abduction.

The youth wing of Ohaneaze Ndigbo pronto  warned of dare consequences should anything untoward happen to the man of God on account of the stream of exchange of diatribe between him and the Presidency, which was growing to the point of embarrassment to all, including his church.

For Fr. Mbaka’s traducers, his face off with the Presidency was one passive interest in partisan politics too many. They cited his claim that former President Goodluck Jonathan was “bad luck” to the country on account of his perceived non-performance. Mbaka, some would say, was privy to the controversial dethronement of former Governor Emeka Ihedioha of Imo State who was replaced by Senator Hope Uzodimma. Some quarters still hold that his “prophecy” was intended to be a suiting balm sort of to many ahead of the Supreme Court of Nigeria’s controversial ruling – a landmark decision that continues to engage pundits pondering.  There are others who remembered his drama with Mr Peter Obi, former Anambra State governor, on the Adoration ground during the build up to the 2019 general election when Obi bluntly refused to make open donations to the church and Fr. Mbaka ‘prophesied’ that he and his presidential candidate, Atiku Abubakar, will fail in that election.

But Fr. Mbaka’s army of acolytes are quick to say that it is well within his right to express interest in politics around him. After all, man is a “political animal.” They would tell you that the Catholic Church has a duty to speak out and fight for justice when the need arises.

And he, Fr. Mbaka, has not disappointed in doing that. He never ceases to express his personal opinion whenever he feels compelled to do so.

Depending on who you ask, what transpired at Bishop Onaga’s Enugu residence, leading to irate worshipers going berserk, while demanding the “release” of Fr Mbaka who admitted his bishop demanded he remained indoors for a period of one month to enable him pray and meditate over his activities, was a bad omen. Mbaka said he was released after  the protest by members of his ministry.

Head or tail, however, that was sure to cast a doubt on the dept of the worshipers’ understanding and perception of the universal church’s authority, and the office of the bishop as a local ordinary and Vicar of Christ.

The issues culminating to the soaps Nigerians and the world have been treated in the recent past seem to border on the absurd. And now, perhaps the quartet of Fr. Mbaka, the Buhari Presidency, the Catholic Church and the Nigerian public will do well to see that the oddities so far hauled into the fouled air are consigned to their appropriate place. 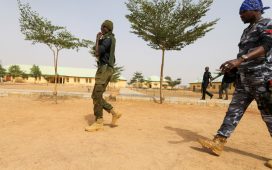 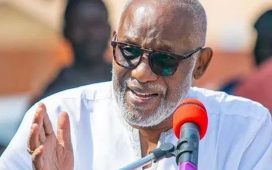