Architects should reuse existing buildings where possible to reduce embodied carbon and emissions, according to Christopher Trott, head of sustainability at Foster + Partners.

Other ways of lowering emissions include not building basements, reducing spans, using less materials and making greater use of wood, Trott said.

“The kind of immediate things that we can do are things like reusing existing buildings and perhaps reducing spans in existing structures,” Trott said. “You can simply use less material and perhaps avoid basements where they’re not necessary.”

Trott was part of a live panel debate on Dezeen discussing the outcome of the COP26 climate conference, which he attended in Glasgow earlier this month.

Making buildings reversible is another way of reducing emissions, he said, although he felt that viable alternatives to steel and concrete are a long way off.

However, Trott added that mineral-based materials such as concrete and steel would still be used “for quite a long time yet”, and said that architects should ensure that components are designed for long-term use.

“Some of the things that are being built now, provided they can be deconstructed or reused well into the future, that’s an investment,” he said. “It’s not a problem, it’s an investment. It’s still there to be used in future generations of exactly the same buildings.”

Trott’s comments came shortly after Foster + Partners had its proposal for the Tulip, a skyscraper tourist attraction in the City of London, rejected by the UK government partly over concerns about the “highly unsustainable concept of using vast quantities of reinforced concrete for the foundations and lift shaft to transport visitors to as high a level as possible to enjoy a view”.

It is thought to be the first example of the government referencing embodied carbon in a planning decision letter. 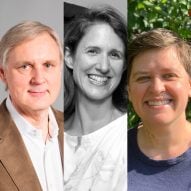 “I think it’s fair to say that the world is still catching up on embodied carbon… it’s a journey that I think most [in the building industry] have been on for four or five years, they haven’t been on for much longer than that,” said Trott.

He added that changing the manufacturing industry to produce more environmentally friendly construction products is “really difficult and is going to take a while”.

As sustainability lead at Foster + Partners, Trott said his job “is to help us make our buildings, our urban scale projects and our products more sustainable. I have a hand in all of the projects one way or another,” he said.

Trott was speaking during a talk hosted by Dezeen as part of skylight manufacturer Velux’s Build for Life online conference.

“Difficult to turn down projects”

On the panel with him was Cécile Brisac, co-founder of London studio Brisac Gonzalez, who said architects’ hands “are a little bit tied at some points” when designing for private developers that do not have a strong environmental agenda.

“However much we try to drive change, our power is fairly little actually compared to the clients,” she added.

Referring to a quote from prominent environmental lawyer Farhana Yamin that architects “are enablers of business as usual”, Brisac said: “Well, it’s quite difficult to sort of turn down every single project because it’s not meeting all the climate targets. You know, you can only do as much as you can do, and you can try to push things as much as you can.”

Also on the panel, Cassie Sutherland of sustainable urbanism network C40 Cities said that minimising embodied carbon in new buildings should become “the norm and not the exception”.

“I think that now is not the time where we can kind of say, alright, we’ll let that one go, I won’t push back on that one… and it is very difficult when it comes down to a business decision and whether you’re going to take that project or you’re not,” she said.

“Our time is to act now, we must act now, we must be taking strong action. And I think there is an issue… about the lag time between regulation coming in, and then the buildings being built. And I think, again, we’re kind of running out of time to deal with that lag anymore.”

Falling for it: Alex Prager’s flights of fancy – in pictures

‘I make stars look interesting, not beautiful’: Anton Corbjin on his favourite portraits

Francis Bacon: Man and Beast review – ‘I want to run away, but I can’t stop looking’