But new fossil evidence puts these gentle, slow-moving sea cows in Texas during the most recent ice age.

The discovery has researchers wondering if an ancient population of manatees once called the Lone Star State home between 11,000 and 240,000 years ago.

Or perhaps the gentle marine mammal merely swam by the Gulf Coast for a visit, much as it does in the modern era.

‘This was an unexpected thing for me because I don’t think about manatees being on the Texas coast today,’ said Christopher Bell, a professor at UT’s Jackson School of Geosciences. 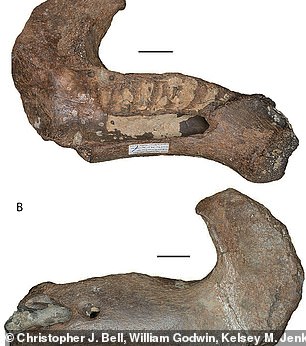 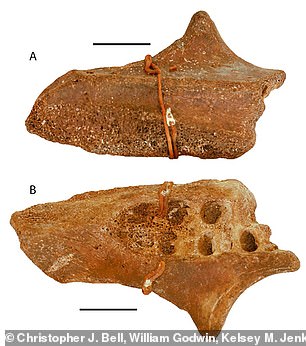 Manatee fossils from the Pleistocene donated to the Sam Houston State University Natural History Collections. Conventional wisdom among scientists is that during the last ice age, Texas’ coastal waters were too cold for manatees

The eight fossils described in a paper published in Palaeontologia Electronica include manatee jawbones and rib fragments from the Pleistocene.

Most came from McFaddin Beach near Port Arthur and Caplen Beach near Galveston and were donated to the Sam Houston State University Natural History Collections by amateur fossil collectors over the last 50 years.

‘We have them from one decade to another, so we know it’s not from some old manatee that washed up, and we have them from different places,’ said SHSU curator William Godwin. ‘All these lines of evidence support that manatee bones were coming up in a constant way.’

Manatees have been spotted off the Texas coastline as far back as 1853, but reports have been ‘sporadic and poorly documented until relatively recently.’ 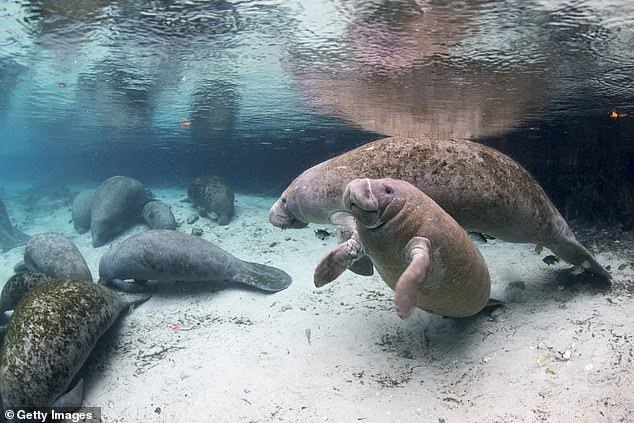 Manatees are typically found in the warm coastal waters of Mexico, Belize, Florida and the Caribbean home. They have been known to take ‘summer vacation’ in Texas, though reports have been ‘sporadic and poorly documented’ 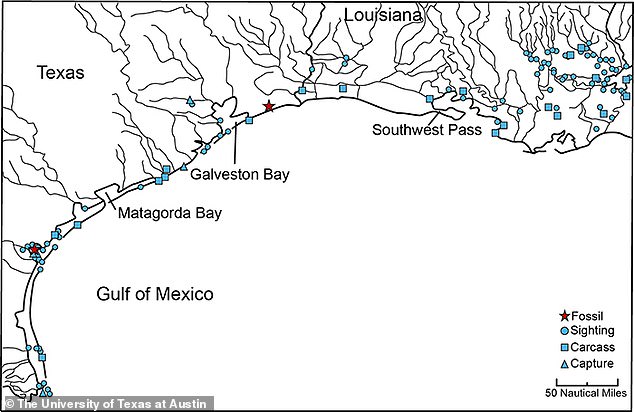 The eight fossils, including manatee jawbones and rib fragments, came from McFaddin Beach near Port Arthur and Caplen Beach near Galveston. They were donated to the Sam Houston State University Natural History Collections by amateur collectors over the last 50 years.

Conventional wisdom among scientists has been been that, during the Pleistocene, the coastal waters were too cold for them.

But the age of the donated fossils match better-known ice age fossils and paleo-Indian artifacts discovered on the same beaches. 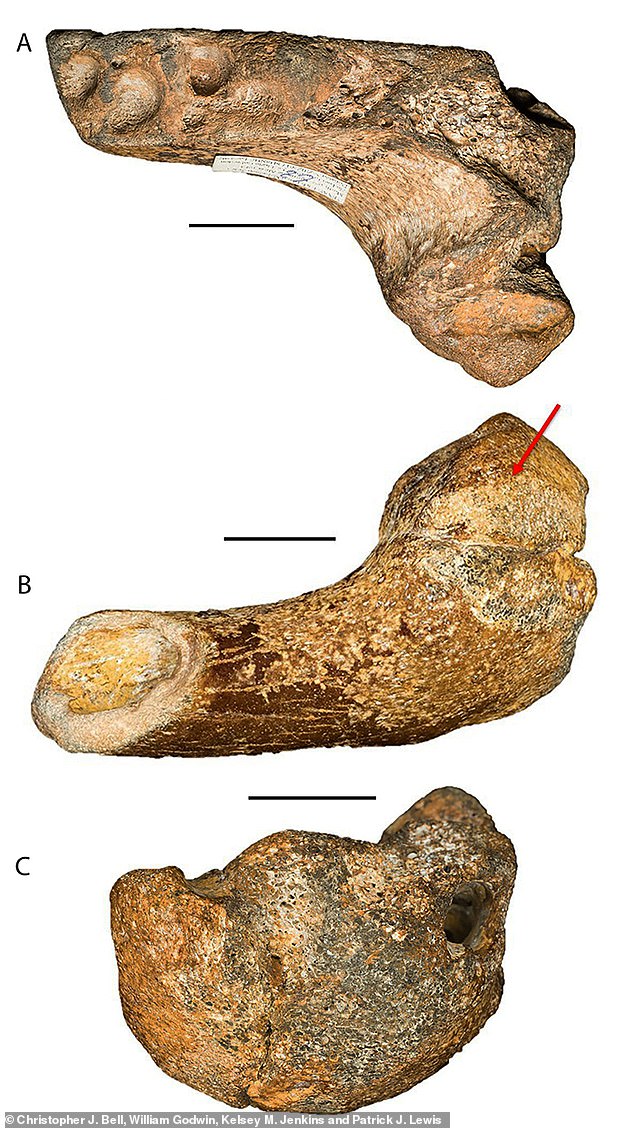 Research led by the University of Texas at Austin has found fossil evidence for manatees along the Texas coast dating back to the most recent ice age, between 11,000 and 240,000 years ago

Their discovery has led scientists to believe that either the coastal climate during the Ice Age was much warmer than assumed, or Pleistocene manatees were more resilient to cold than their descendants.

Fossil remains of manatee ancestors date back to at least 50 million years.

Christopher Columbus wrote of encountering three manatees in a 1493 journal entry, referring to the trio as ‘mermaids.

In the 1970s, Florida’s manatee population reached an all-time low of just a few hundred individuals.

In 1996, a red tide was responsible for 151 manatee deaths, approximately 15 percent of the population along South Florida’s western coast. 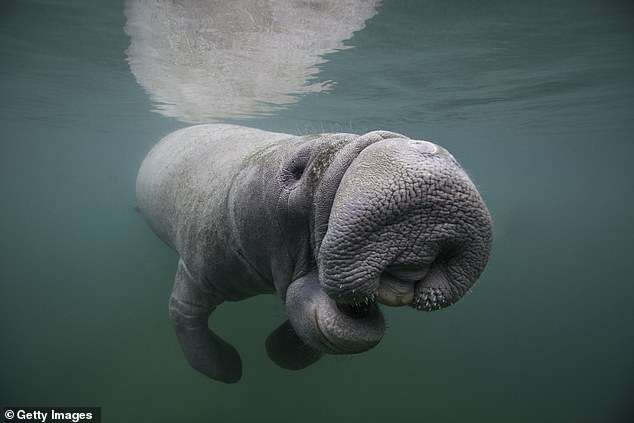 Front view of Florida Manatee swimming near the surface with its mouth open in a yawn. A half-century ago, the marine mammal was down to a few hundred individuals, but conservation efforts have increased its number significantly

By 2017, a concerned conservation effort bolstered their numbers to 6,250 and the manatee’s status was downgraded from endangered to threatened.

Last summer, a manatee nicknamed ‘Molly’ was spotted several times off the Texas coast, including in Galveston Bay.

‘They’re not common in Texas, but sometimes make their way here from Florida in the summer,’ the Texas Parks and Wildlife Department tweeted in August 2019. ‘Our winters are too cold for them.’

Park official Mark Fisher told the Houston Chronicle he was almost positive it was the same sea cow spotted in Corpus Christi Bay on July 11 and near the jetties at South Padre Island six days later.

There hadn’t been reports of a manatee signing in the area since 2014.

In 1995, an eight-foot-long manatee named ‘Selena’ was rescued from Houston’s Buffalo Bayou.

READ  A giant leap for womankind

Australia's iconic koala bear is on the brink of extinction

Comet's icy interior is 'fluffier than froth on a cappuccino'

Get up and go: is 54 really the age we lose our passion for life?