Scientists have discovered a 47-million-year-old fossilized fly with its stomach still full from its last meal.

The previously unknown species was found frozen in rock sediment at the Messel Pit, a fertile fossil site in central Germany.

Noticing its ‘bulging abdomen,’ researchers discovered the insect was filled with pollen from a variety of prehistoric plants.

While bees and butterflies are commonly thought of as pollinators, during the Eocene, it was flies that played a key role in propagating plants and flowers. 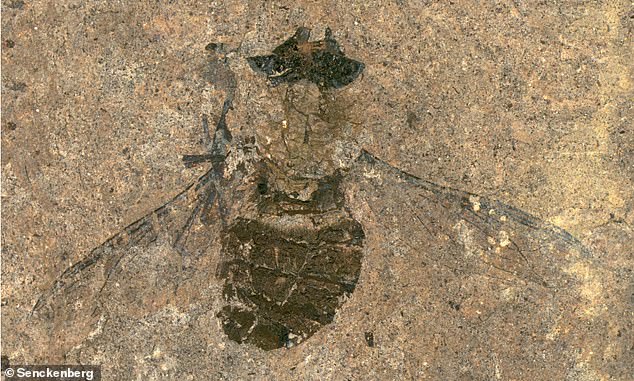 The fossil represented a new species of ancient, short-proboscid fly the researchers dubbed  Hirmoneura messelense, according to Science Alert.

‘The rich pollen content we discovered in the fly’s stomach suggests that flies were already feeding and transporting pollen 47 million years ago and shows it played an important role in the pollen dispersal of several plant taxa,’ said Fridgeir Grimsson, a paleobotanist at the University of Vienna and co-author of a paper published this week in the journal Current Biology.

That identification allowed them to reconstruct the local environment some 47 million years ago. 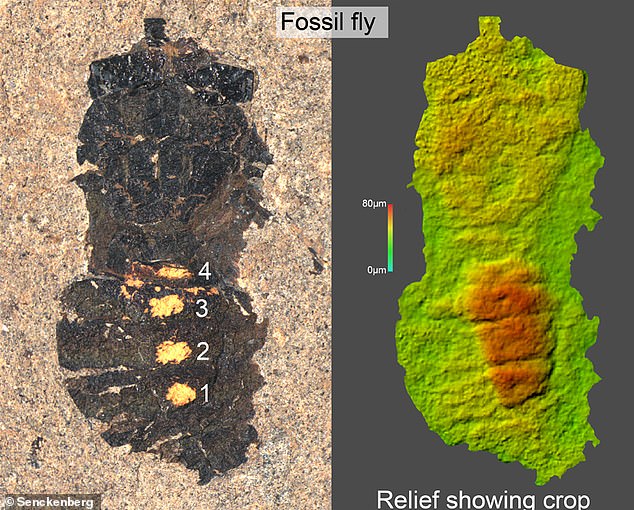 A former quarry outside Frankfurt, the Messel Pit is home to some of the best preserved plant and animal fossils from the Eocene, an era that lasted between 57 and 36 million years ago.

Last year, the oldest known species of python, called Messelopython freyi, was discovered at the pit that is sometimes referred to as a ‘fossil treasure chest.’ 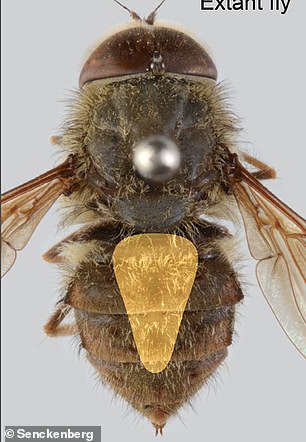 an extant Hirmoneura maculipennis, a distant relative of the fly found in the Messel Pit

Some finds have preserved feathers, fur, skin and wing membranes.

Finding a new species’ final meal still in its belly offered unique insights into how it interacted with local plant life and how it behaved during feeding, the researchers said.

Water-willows grow in wetlands and the shallow parts of lakes, with little canopy cover from trees.

The presence of virgin ivy suggests that the fly fed on plants growing at the forest edge surrounding an ancient lake.

Pollinators with long proboscises, like hummingbirds, generally hover above plants to gather pollen.

But this insect’s snout was so short researchers believe it was hidden inside its head.

The willows and ivy it preferred grow tightly packed together, so it could easily walk from one flower to another.

‘It is likely that the fly avoided long-distance flights between food sources and sought pollen from closely associated plants,’ Grímsson said. 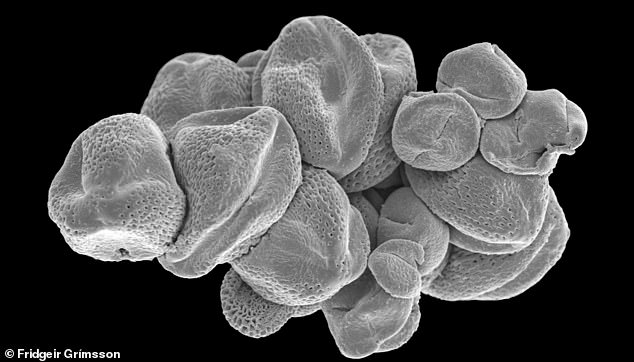 The water-willow and ivy the fly preferred grow packed together, so it could easily walk from one flower to another. Pictured: Electron microscope imagery of fossil pollen from the fly’s stomach

The long hairs, or setae, on its thorax probably also picked up additional pollen as it feasted, according to the report.

Modern-day flies are usually seen as a nuisance, but they are second only to bees in importance as pollinating insects, according to the University of California Division of Agriculture and Natural Resources, and the primary pollinators for many wild and cultivated plant species.

Their presence in the fossil record can shine a light on the deep past.

Last year researchers in Australia announced they discovered a pair of flies that had become trapped in amber some 41 million years ago.

The frisky insects were frozen mid-coitus in the gluey tree resin and are among the oldest fossilized mating pairs ever discovered.