An international footballer has spoke of his shock after his ‘odd’ symptoms actually turned out to be leukaemia.

Courtney Wildin, 22, from Leicestershire, suffered fatigue and night sweats the day after playing a match.

The model also had a swollen neck and went for medical tests the next day. He was given the devastating news he had leukaemia just days later. 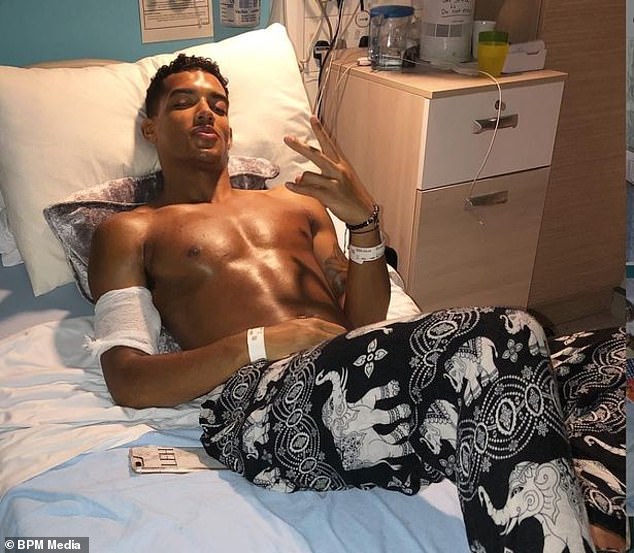 Courtney Wildin, 22, from Leicestershire, suffered fatigue and night sweats the day after playing a match (pictured in hospital) 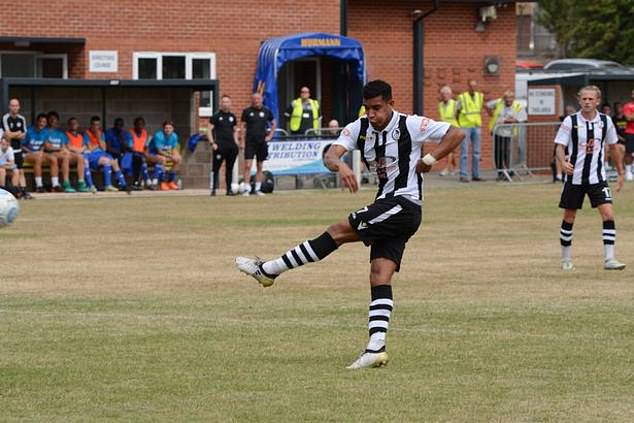 The model also had a swollen neck and went to his doctor the next day for some tests, which later showed he had leukaemia

Mr Wildin, whose career started in Aston Villa’s academy, said: ‘In three days I went from playing football to being diagnosed with cancer – it was a massive shock.’

Fatigue is a common symptom of most types of cancer, including leukaemia. Swollen lymph nodes in the throat and night sweats can also occur.

The defender, who plays for Coalville and has been capped for Antigua and Barbuda, is now back in hospital after his first round of treatment failed to stop the disease.

He told Leicestershire Live: ‘They treated me with a lighter course of chemo which is usually all that’s required in cases like mine.

‘But on the 29th day of treatment they check the bone marrow and they’ve not seen a big enough decrease in the levels of leukaemia.’

Mr Wildin, who lives with his girlfriend Lauren Howkins in Ibstock, Leicestershire, is now undergoing a more intensive course of treatment.

It will include seven days of grueling chemotherapy, followed by a three-week spell in hospital to recover. 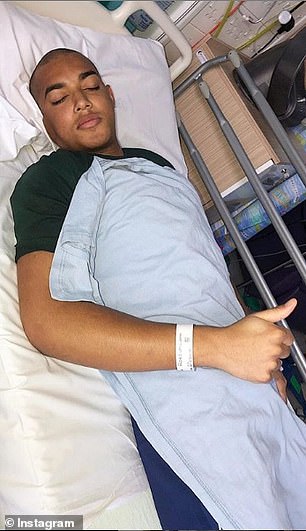 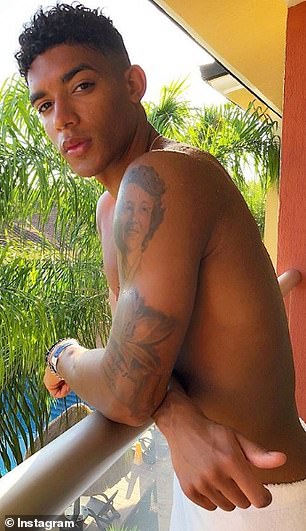 Mr Wildin posted a picture of himself in hospital (left) last Friday, marking his 29th day of treatment. Pictured right before his diagnosis, he then wished his followers a happy 2019

WHAT IS ACUTE MYELOID LEUKAEMIA?

Acute myeloid leukaemia (AML) is a type of blood cancer that starts in young white blood cells in the bone marrow.

AML affects around one in 200 men and one in 255 women in the UK at some point in their lives.

Approximately 19,500 new cases occur every year in the US.

It is most often diagnosed in older people.

AML’s exact cause is unclear, however, risks include:

AML is usually treated via chemotherapy. A bone marrow or stem cell transplant may be required.

Mr Wildin, who has modelled for Nike, said: ‘It’s a harsher treatment but they’re 80 per cent sure that after this I’ll be cured and then back to playing football.

‘It’s just a case of getting over the mental cloud of being in hospital all that time, which is never nice.’

Mr Wildin described the symptoms of his cancer, which led to him being diagnosed on December 5, as ‘odd’. He played against Tamworth just days before.

He said: ‘On the Sunday I was celebrating my girlfriend’s and my brother’s birthdays and I’d been feeling a bit of fatigue and having night sweats.

READ  Rise in HPV-related cancers DESPITE rise in vaccine coverage

‘On Monday I woke up with a swollen neck. It didn’t hurt but I was really odd so I had some tests done.’

Mr Wildin, who hopes to be back playing football soon, said the diagnosis had also been a shock for Lauren and his family.

He said: ‘It’s been difficult for my girlfriend. But she’s been great. The whole family has been amazing.

The defender, who joined Coalville last summer from Nantwich Town, is on Ward 27 – the ward for young people with cancer – at Leicester Royal Infirmary.

He said: ‘Last time I was in hospital it was on an adult ward where there were people with a wide range of problems and that was a struggle.

‘But this time I’ll be on the young people’s ward where friends and family can visit all the time and I’ll be with other people my own age who are going through the same thing.’

He said that while the cancer itself hadn’t caused any pain, he was expecting more of the treatment’s unusual side-effects. 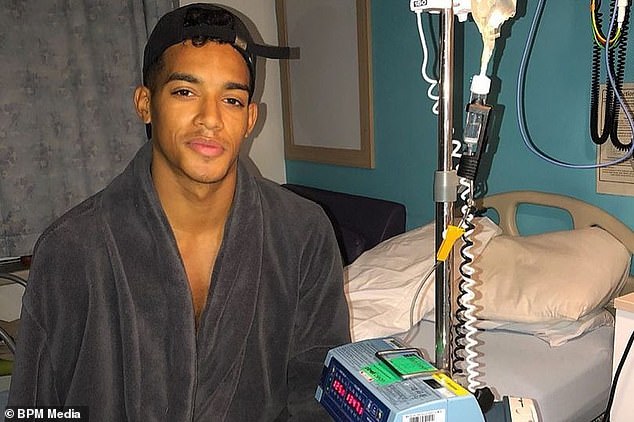 Mr Wildin said: ‘In three days I went from playing football to being diagnosed with cancer – it was a massive shock’ 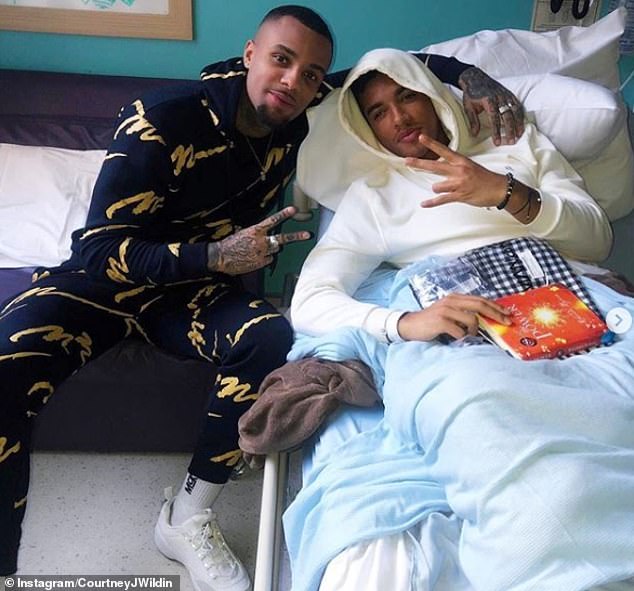 The defender, who plays for Coalville and has been capped for Antigua and Barbuda, is back in hospital after his first round of treatment failed to stop the disease (pictured with a friend) 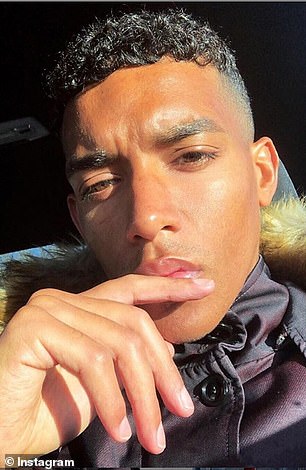 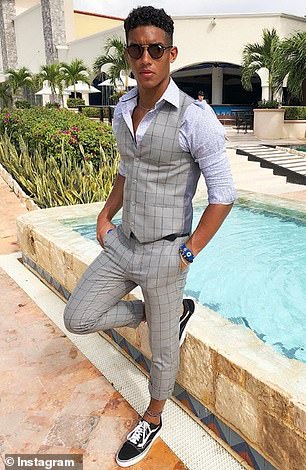 Mr Wildin (pictured left and right before his diagnosis) was initially told he needed a mild course of treatment, however, when this failed to ‘decrease the levels of leukaemia’, the footballer started a more intensive regimen, including chemotherapy

Mr Wildin said: ‘The chemotherapy had a lot of weird side-effects that were strange – all sorts of things from sore teeth to constipation and trouble sleeping.

Mr Wildin revealed that when he announced he had been diagnosed with leukaemia there was an outpouring of support.

He has been posting regular updates about his treatment on his Instagram page.

Coalville Town chairman Glyn Rennocks said at the time of the diagnosis that the club will ‘support him as best we can’ and wished him a ‘speedy recovery’.

He added: ‘Courtney has been a fantastic player both on and off the field since he joined us and we are all deeply shocked at the news.’ 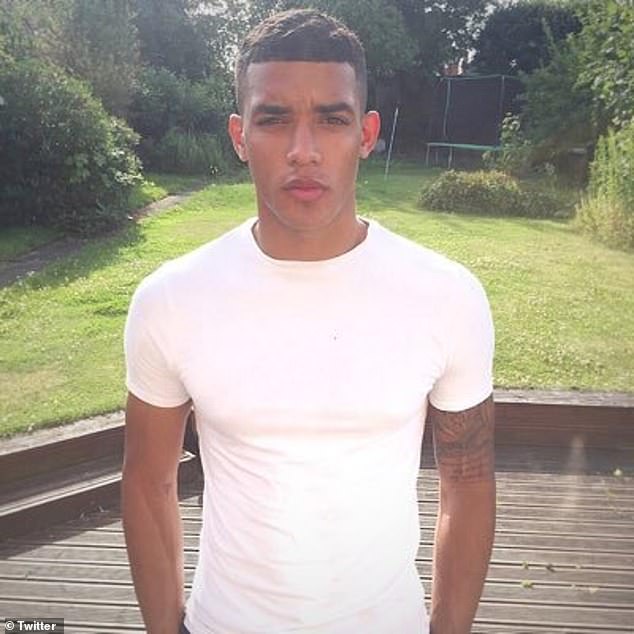 Mr Wildin described the symptoms of his cancer, which led to him being diagnosed on December 5, as ‘odd’. He played against Tamworth just days before (pictured pre-diagnosis) 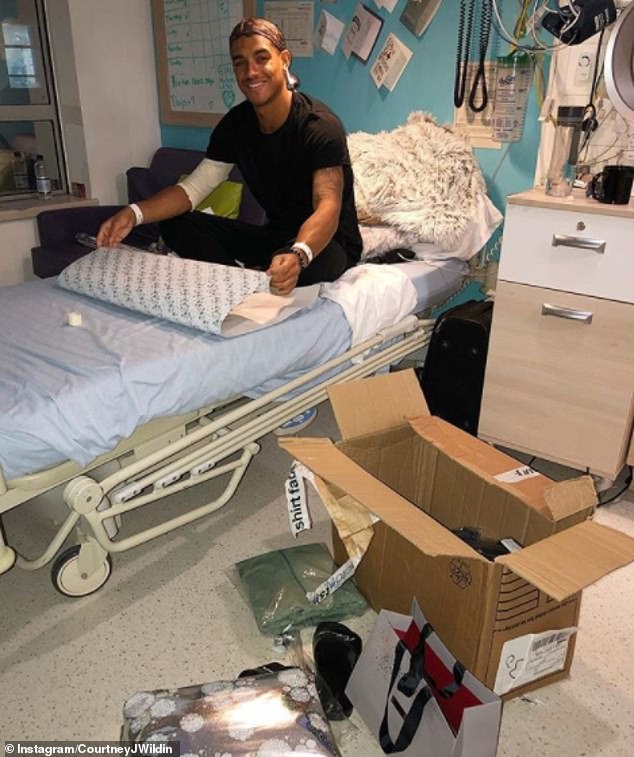 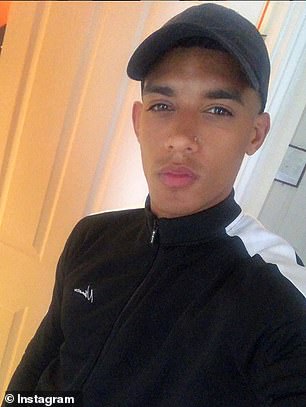 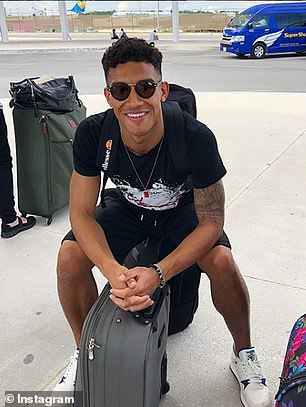 Mr Wildin has experienced everything from sore teeth to constipation and insomnia as a result of his treatment. He is pictured left in Glasgow and right in Mexico during happier times 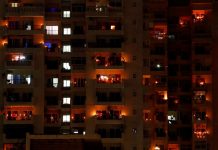 The Guardian view on Easter week: time to be creative

'Home testing could be crucial in fight against Covid-19 outbreak'

Coronavirus symptoms: Three less obvious signs that could mean you have COVID-19 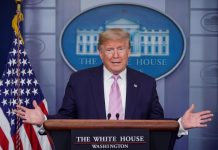