Seabass from French and Spanish waters should be ‘off the menu’ for fish loving foodies over concerns about the impact fishing methods have on population sizes.

The Marine Conservation Society (MCS) has added these species to its ‘red category’ of fishes to avoid buying and eating in its Good Fish Guide.

They recommend opting for farmed or line-caught seabass, king and queen scallops farmed in Scotland, European hake and haddock as ‘safer alternatives’.

Seabass from the southern Bay of Biscay and Atlantic Iberian waters are of particular concern due to falling population sizes and harmful fishing methods.

MCS says industrial fishing methods for seabass – including static nets and pair trawling can lead to dolphins and porpoises being accidentally caught or harmed. 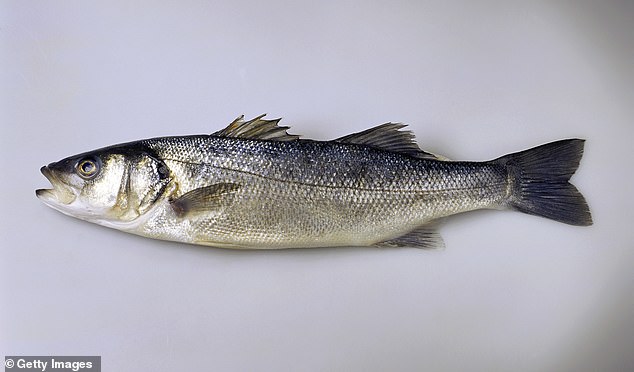 Seabass from the southern Bay of Biscay and Atlantic Iberian waters are of particular concern due to falling population sizes and harmful fishing methods. Stock image

Populations of aquatic mammals in French and Spanish waters are ‘rapidly declining’ due to these methods and avoiding wild-caught seabass can reduce the risk.

Dolphins and porpoises are natural predators of seabass, and the Bay of Biscay makes for an excellent hunting ground, MCS said.

Unfortunately, this means that the cetaceans are vulnerable to being accidentally caught in fishing nets and often don’t survive the experience.

MCS produces the ‘Good Fish Guide’ which rates fish stocks from green, are the most sustainable species, through to amber and red, fish to avoid buying.

The list regularly changes, with fish moving up or down in sustainability levels depending on the estimated size of population in any given area.

The latest changes have seen North Sea herring move from green to amber due to stock sizes falling sharply since 2016 as the fish grew in popularity with chefs.

Dover sole has a mixed picture – in the North Sea it has moved up to a higher level of amber due to stocks being much smaller than previously thought.

However, Dover sole from the Eastern English Channel and the Irish sea has moved from amber to green as stocks there are bigger than previously thought.

The other major change saw MCS urge shoppers to avoid pair trawled and static net-caught seabass from the southern Bay of Biscay and Atlantic Iberian waters.

This comes in part because of the impact these methods have on aquatic mammal populations living in the surrounding waters.

In recent years there has been a spike in the number of dolphins found dead on French beaches – with more than 1,100 found between January and March last year.

At the time marine researchers said 90 per cent of the deaths were from the accidental capture of the dolphins in industrial fishing nets.

They say people should instead buy certified farmed or line-caught seabass – or try other fish species such as European hake, haddock and North Sea plaice. 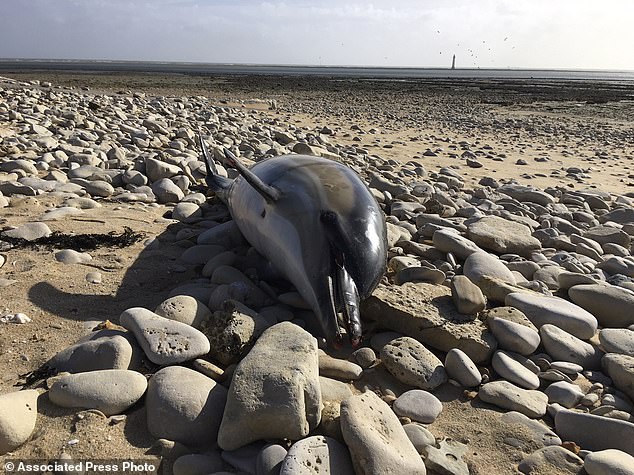 In recent years there has been a spike in the number of dolphins found dead on French beaches – with more than 1,100 found between January and Marc h last year

Good Fish Guide manager Charlotte Coombes said the important thing to consider is ‘how was it caught’ and what impact does that method have on other species.

‘When you hear the term ‘dolphin friendly’ it’s most likely you think of tins of tuna, but why do we reserve our interest in dolphin friendly seafood for just tuna?’ she said.

Coombes says people should check how seafood is caught when making a decision over what to buy and get familiar with different catch methods.

Doing so can ‘can ensure that all of your seafood is dolphin friendly, with or without the logo,’ she explained.

Other items on the ‘red list’ of fish species to avoid due to sustainability concerns are North Sea cod which have dropped below safe population limits.

This means it may struggle to reproduce if population levels don’t start to increase.

King and Queen scallops farmed in Scotland have been added to the guide for the first time – going into the list of green species as a safe choice for consumers.

‘It’s important to consider the wider environmental impacts of the seafood you choose,’ Coombes said, adding that is why people should check how it is caught.