Denizen Works has built a church on a canal boat in east London, which has a pop-up roof that functions like a church organ’s bellows.

Currently moored near Queen Elizabeth Olympic Park, the floating chapel named Genesis is a mobile assembly space that functions as both a church and community hub.

Genesis was developed by Denizen Works with Turks Shipyard and naval architect Tony Tucker in response to a competition held by the Diocese of London to establish new congregations in the capital.

It is characterised by its expandable roof, which takes cues from church organ bellows and Volkswagen camper vans, and was designed to draw attention to the venue.

“The brief called for a ‘conspicuous presence’ and the idea for a pop-up roof emerged in response to this,” said Andrew Ingham, director of Denizen Works.

“We were thinking of the transformative qualities of VW camper vans and were also inspired by the beautiful old illustrations we found during our research of church organ bellows,” he told Dezeen.

“We were particularly taken with the sculptural form of these bellows and we wanted our roof to share this formal quality whilst establishing a subtle poetic link back to ecclesiastical architecture.”

The roof is powered by hydraulic rams and made from translucent sailcloth that is lined with LED lights, intended to evoke an “illuminated beacon” when it is expanded.

It can be easily lowered at the push of a button, which transforms the chapel into a compact and low-lying structure that can pass easily through London’s narrowest canal tunnels.

“The pop-up roof allows for two modes of configuration, meaning that when the roof is lowered it can pass through the narrow tunnels of the canal network, whilst when moored, expanding to create a dramatic interior space that would be flooded with light,” explained Ingham.

“It also serves to bring joy – something we strive for in all of our projects.”

The boat’s exterior is painted in traditional maritime hues, adorned with a zigzag pattern on the roof fascia that mirrors the sail-stitching that was used to create the bellows.

This zigzag motif continues internally, where it is used on aluminium privacy screens on the windows, tiling in the kitchen and on the legs of the furniture.

Genesis is accessed midship, with the entrance flanked by the main assembly space at the front of the barge and the kitchen, office and toilet at the rear.

The interiors are lined with light plywood walls and dusky green linoleum floor, overt of any religious symbolism to ensure it is welcoming to all.

The main hall is intended as a cosy gallery with clean, minimal detailing, though this is transformed into a dramatic 3.6-metre-high hall-like space when the roof is raised.

It features bespoke, adaptable furniture that allows it to accommodate a wide range of community activities alongside church services – such as toddler groups, interfaith celebrations, supper clubs and educational workshops.

The furniture, which was designed by local design company Plyco, includes plywood stools and foldable tables that are stored beneath the boat’s decks.

Its capacity ranges between 40 and 60 people depending on the configuration of furniture.

“Our approach to adaptability was to maximise the free area in the main hall so that it could accommodate a wide range of community activities,” said Ingham.

“So that the space could be completely free from furniture, we commissioned local furniture makers, Plyco, to design a bespoke suite of furniture; foldable tables and stackable stools can be hidden on pull-out trolleys, which are stored beneath the bow decks.”

Genesis’ interiors are complete with a flat-pack altar designed by Denizen Works, which is made from leftover materials from the interior fit-out and features an angled-front face like the prow of a boat.

The studio first released visuals of the church in 2017, after winning an invited competition for the structure held by the Diocese of London – a collection of Christian faith organisations in London, overseen by the Church of England.

The boat is currently moored alongside Here East at Queen Elizabeth Olympic Park, but it will regularly moor at major regeneration sites in London to help foster new congregations in areas.

Denizen Works is an architecture studio with offices in London and Glasgow, founded in 2011 by Murray Kerr. Other projects by the studio include the Haddo Yard housing in Whitstable and a proposal for a viewing tower and bird hide in Scotland.

Other floating architecture featured on Dezeen includes an inflatable arts venue on a barge that unfurls in just 12 minutes and a dairy farm in Rotterdam that demonstrates how food production can become less vulnerable to climate change.

Photography is by Gilbert McCarragher, and the film is directed and edited by Camilla Robinson Kerr, produced by Dapper Films.

A spectacular gorefest – Thomas Becket: Murder and the Making of a Saint review 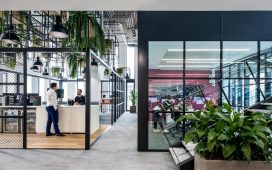 Tracey Emin on beating cancer: ‘You can curl up and die – or you can get on with it’