ALGIERS (Reuters) – At least five people were killed in a stampede at a packed rap concert in the Algerian capital on Thursday night, a hospital source said.

Thousands had gathered at the concert of local rap star Abderraouf Derradji, known as “Soolking”, in a stadium in Algiers.

No further details were immediately available

MAFS: Mikey Pembroke hints at an AFFAIR with Stacey Hampton 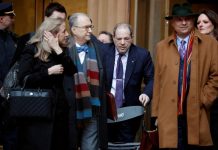