NEWSCABAL
Home » Festivals in South America 1,000 years ago were fuelled by BEER
science

Festivals in South America 1,000 years ago were fuelled by BEER


Drinking an ancient type of beer and celebrating with regular alcohol-fuelled festivals may have been key in ensuring the long-lasting peace of the Wari Empire.

The civilisation endured for 500 years in relative peace and harmony across Peru until the rise of the Inca empire in 1100 AD.

Archaeologists studying remnants of the Wari culture found evidence of a brewery which was reduced to ashes after its collapse.

A study of the drinking vessels found the South American natives created a way to produce beer – but it was a drink which did not last long and had to be drank swiftly.

It was called chicha and made from fermented from corn and pepper berries and was the centrepiece of many celebrations where long-standing alliances between different factions were cemented.

The brewing and then serving of the beer formed a unity among these different Peruvian communities, which ‘kept people together’, the researchers of a new study said. 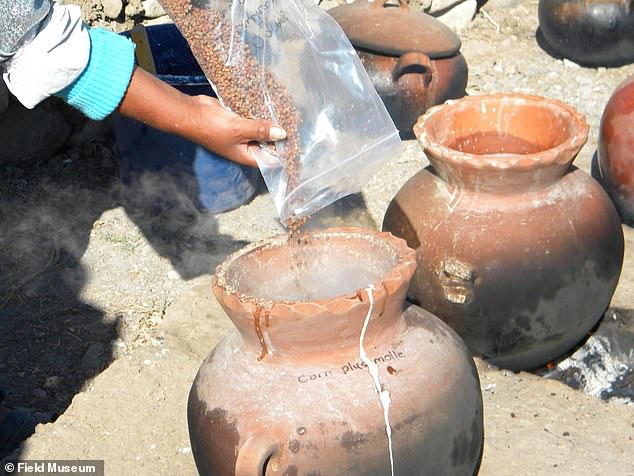 Drinking an ancient type of beer could have been the key to why the Wari Empire, which gave rise to the Inca Empire, lasted for so long. Experts team worked with Peruvian brewers to recreate the ancient chicha recipe used at Cerro Baul

WHO WERE THE WARI CIVILISATION?

The Wari civilisation flourished in the coastal and highland areas of ancient Peru between c. 450 and c. 1000 CE.

Based at their capital Huari, now central Peru, the Waris successfully exploited the diverse landscapes they controlled to construct an empire administered by provincial capitals connected by a large road network.

Their methods of maintaining an empire and artistic style would have a significant influence on the later Inca civilisation.

‘This study helps us understand how beer fed the creation of complex political organisations,’ said Ryan Williams, associate curator of the Field Museum of Natural History.

‘We were able to apply new technologies to capture information about how ancient beer was produced and what it meant to societies in the past,’ he said.

Nearly twenty years ago, the team discovered an ancient Wari brewery in Cerro Baúl in the mountains of southern Peru.

Archaeologists found broken vessels in this ‘rare time capsule’ after excavating it over the last two decades.

The researchers analysed pieces of ceramic beer vessels from Cerro Baúl using techniques which involved removing tiny pieces of material and heating them so that the molecules break down.

This told them where the clay came from, which was found to be locally sourced, and what the beer was made of. They then recreated the brewing process themselves.

The key, the researchers found, was the fact that they brewed the beer in their own breweries and used these pepper berries because they could survive droughts.

The Wari empire was huge and made up of different groups of people from all over Peru.

The Waris also held religious ceremonies where the beer was served, which were important to society.

They would drink chicha from tall ceramic vessels decorated to look like Wari gods and leaders.

Heads of other local communities who lived in the shadow of these two major empires would also attend these gatherings. 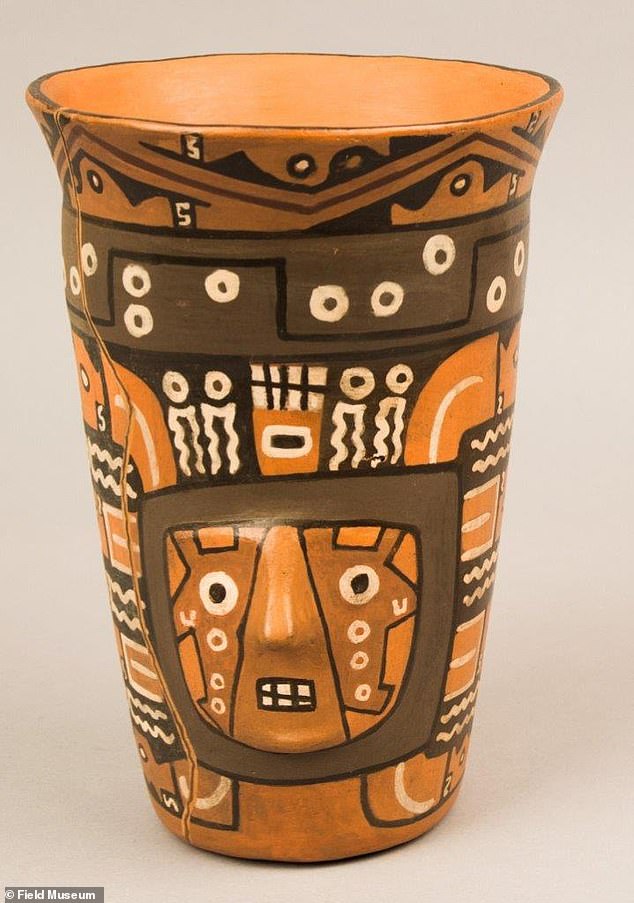 The brewing and then serving of the beer formed a unity among these different Peruvian communities, which ‘kept people together’, they said. A replica of a chicha vessel used in Cerro Baul 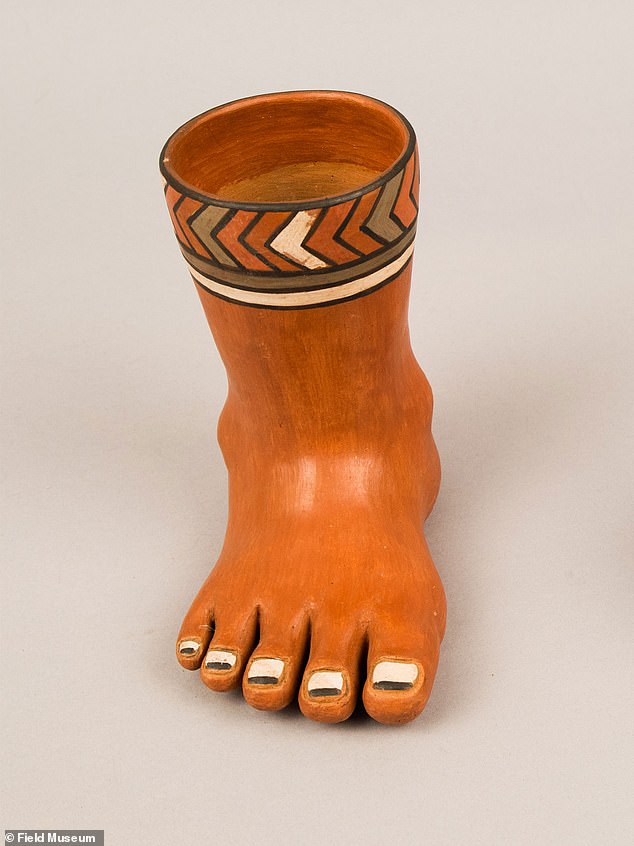 They would drink chicha from tall ceramic vessels decorated to look like Wari gods and leaders (pictured is a replica).  Heads of other local communities who lived in the shadow of these two major empires would also attend these gatherings

WHAT IS THE BEER-LIKE BEVERAGE CALLED ‘CHICHA’?

To learn more about the beer that played such an important role in Wari society, the researchers analysed pieces of ceramic beer vessels from Cerro Baúl.

They used several techniques, including one that involved shooting a laser at a shard of a beer vessel to remove a tiny bit of material, and then heating that dust to the temperature of the surface of the sun to break down the molecules that make it up.

From there, the researchers were able to tell what atomic elements make up the sample, and how many – information that told researchers exactly where the clay came from and what the beer was made of.

To check that the ingredients in chicha could indeed be transferred to the brewing vessels, the researchers worked with Peruvian brewers to recreate the brewing process.

‘Making chicha is a complicated process that requires experience and expertise.

The experiments taught us a lot about what making chicha would look like in the ruins of a building and how much labour and time went into the process,’ said Professor Donna Nash, an adjunct curator at the Field Museum.

‘It was like a microbrewery in some respects. It was a production house, but the brewhouses and taverns would have been right next door,’ said Mr Williams.

‘People would have come into this site, in these festive moments, in order to recreate and reaffirm their affiliation with these Wari lords and maybe bring tribute and pledge loyalty to the Wari state.

The authors of the study argue that this steady supply of beer could have helped keep Wari society stable.

‘We think these institutions of brewing and then serving the beer really formed a unity among these populations, it kept people together,’ said Williams.

As the Wari empire was collapsing, the revellers trashed their communities and set fire to the brewery at Cerro Baúl.

Its ruins were covered with sand so that no one could ever use the building again – until its re-discovery.

The findings were published in the journal Sustainability. 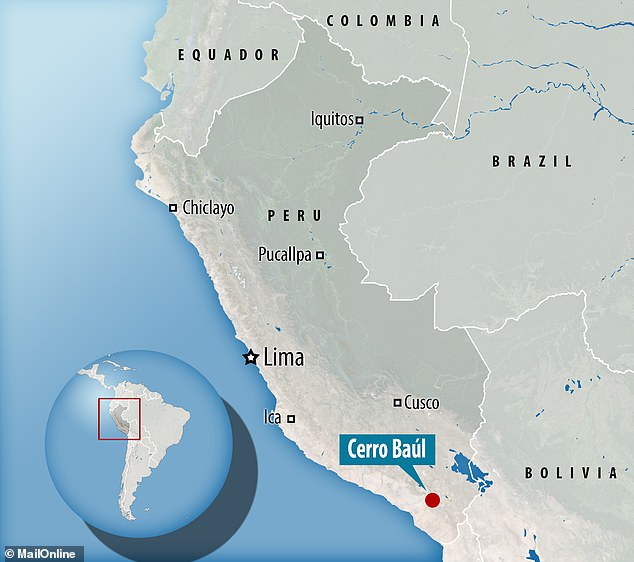 The Wari Empire lasted for 500 years, from 600 to 1100 AD, a long time for an Empire before eventually giving rise to the Inca. Archaeologists studying the remnants of the Wari kingdom, including a brewery which was reduced to ashes after its collapse, to see what kept it ticking