LONDON (Reuters) – The U.S. Federal Reserve’s efforts to shield the economy from the effects of the coronavirus have — for now – slowed a scramble for dollars that threatened to clog funding markets.

The dollar had gained almost 9% in 11 days in the rush for cash, but it fell on Tuesday, at one point to its weakest since March 19 =USD. Measures of demand for dollars signaled that many businesses and banks felt they had enough for now.

The Fed announced on Monday it would buy bonds in unlimited numbers and backstop direct loans to companies, the latest in a series of policy steps taken over the past 10 days to calm markets and support the economy.

It actions have included 150 basis points of interest rate cuts, targeted schemes for short-term money markets and extended dollar swap lines. Those actions marked intervention by the central bank beyond financial markets, where it has so far concentrated its firepower, into the real economy.

The three-month euro-dollar swap spread EURCBS3M=ICAP, a measure of the premium European borrowers are willing to pay for access to dollars, fell to 8 basis points, down from 14.5 bps on Monday, before the Fed’s announcement.

The spread had risen as high as 86 bps last week, but a series of measures, including unprecedented joint action to ensure a plentiful supply of dollars for central banks, eased the rush for the U.S. currency.

Swap spreads in other currencies, such as sterling GBPCBS3M=ICAP, tightened, although the dollar-yen spread JPYCBS3M=ICAP remained relatively wide, with Japanese investors still prepared to pay a sizeable premium for access to dollars.

They also noted a relatively elevated 40 bps spread on the one-year FRA-OIS — a gauge of the risks banks attach to lending to each other — though this too is below last week’s levels of more than 50 bps USDF-O0X12=R.

When are Tesco delivery slots released?

Firms design innovative Covid-19 masks for medics… in a week

UK death toll from coronavirus jumps by 381 in a day 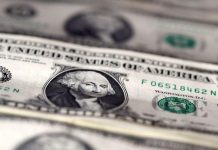 U.S. dollar rises, but off highs, as Fed measures weigh