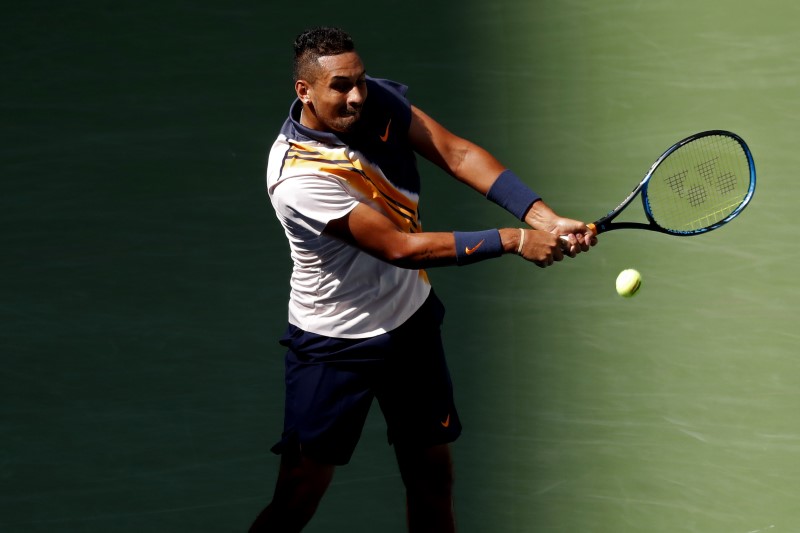 NEW YORK (Reuters) – Roger Federer handed Nick Kyrgios a 6-4 6-1 7-5 tennis masterclass by storming into the fourth round of the U.S. Open on Saturday with a ruthless display that left the Australian talking to himself and waving the white flag.

With all three of their previous meetings requiring a third-set tiebreak to decide the winner, a packed Arthur Ashe Stadium had expected high drama but instead witnessed a rout as Federer recorded his third win against the unpredictable Australian.

The match was not only an intriguing contrast in styles but also in temperament, with Federer, tennis’s ultimate good guy, taking on Kyrgios, the sport’s undisputed bad boy.

While the 37-year-old Federer has mined the most out of his immense skill to capture a record 20 Grand Slam titles, including five U.S. Opens, Kyrgios remains one of the sport’s great enigmas, widely viewed as one of tennis’s great talents and biggest underachievers.

While Federer is usually all business and Kyrgios the showman, the roles were reversed midway through the third set on Saturday when the Swiss produced a trick shot that left the Australian wide-eyed and open mouthed.

Chasing down a cheeky drop shot, the Swiss hit it inches off the ground and curled it around the net post for a ridiculous winner that earned him a standing ovation from the hollering crowd.

“If anyone else is doing those shots against me, I’m probably not too happy. But it’s Roger,” smiled Kyrgios. “It was almost unreal.

“Almost got to the point where I wanted him to start making shots like that, and I finally got it.”

Cool, controlled and clinical, Federer fans can count on the very best from the Swiss each and every time he steps onto the court.

Kyrgios, on the other hand, is a ticking time bomb ready to go off at any moment, all power and furry one minute, disinterested clown the next.

The Australian had already found himself at the centre of a Flushing Meadows controversy this week when umpire Mohamed Lahyani felt it necessary to get down from his chair during Kyrgios’s second round match against Frenchman Pierre-Hugues Herbert to urge him to show some interest.

On Saturday, umpire James Keothavong stayed in his chair and watched on with the rest of the 23,000-capacity crowd as the big-hitting Australian mumbled away to himself while facing an array of exquisite Federer winners that kept flying past his racket.

The match got off to a promising start with neither player able to gain an advantage.

But the tide quickly turned in Federer’s favour when Kyrgios could not convert any of four break chances at 3-3 in first.

After Kyrgios held at 4-4 Federer seized control and never let go. He roared through the next seven games, breaking the crumbling Australian to take the opening set then breaking him twice more in the second for a 5-0 lead.

“At 3-3, love-40, I take one of those points, the match is wide open,” said Kyrgios. “He’s not going to play as well as he did towards the end of the first set or into the second set.

“Doesn’t take a rocket scientist to figure that out.

“I know how to beat him. I have beaten him before. Obviously not today.”

By the third set Kyrgios was running out of ideas as Federer kept up the pressure and broke Kyrgios for a 6-5 lead. An ace on match point finished off the job.