EASTERN Mediterranean cities and islands could be engulfed and destroyed by huge tsunamis because dangerous levels of seismic stress are building up — risking underwater mega-quakes.

Greece in particular is prone to earthquakes, with at least one measuring more than six on the Richter Scale every year.

Professor Akis Tselentis, who heads the Institute of  Geodynamics at the National Observatory of Athens, told Sun Online: “There are areas such as the eastern Corinth gulf that have accumulated a lot of seismic energy that needs to be released.

“We expect an earthquake there for certain in the order of 6.5.

“My big worry is an earthquake close to a city because that could happen in the coming years.

“Athens would be affected and some buildings would certainly be impacted.”

My big worry is an earthquake close to a city because that could happen in the coming years.

Prof Tselentis said: “Even a one metre-high tsunami could pose a danger when islands are so saturated.

“Although rare, there is a real danger that a tsunami could happen.

“While my big worry is of a big earthquake occurring close to a city, my other even bigger concern is of a tsunami happening in the Aegean area when it is full of tourists.”

The threat is being taken so seriously, that in August ten leading navies carried out a surprise drill aimed at dealing with rescuing injured people should a quake spark a killer tidal wave that engulfs coastal communities.

“We will certainly have an aftershock in the order of 5.9 (Richter) in the next hours, or days,” said the Greece-based expert before adding “anything could happen.”

The seismologist said the damage would likely to be “extensive” as so many buildings in the poverty-stricken region are already “in such bad shape.”

At least 18 people have reported to died in today’s double quake and several hundred more have been badly injured.

The 6.4-magnitude tremor was the 11th quake to rock Albania in the last 30 days.

Scientists said another quake also rattled Bosnia this morning with an epicentre around 50 miles south of the capital Sarajevo.

The Bosnia quake – also a 6.4 shocker – was deemed too far away to be an aftershock of the tremor in Albania, but may have been caused by it, said experts.

Jadranka Mihaljevic, head of seismology at the Institute for Hydrometeorology in Montenegro, said countries in the Balkans and in southern Europe have a long history of deadly quakes.

“What we are seeing now is a very strong, very powerful sequence of earthquakes,” she said.

“The deadly 1977-1979 series was followed by a quiet period where new seismic energy was accumulating,” added Dr Mihaljevic.

“But after 40 years of relatively calm seismicity, strong quakes seem to be back.”

The tremor in Albania struck just two months after a 5.6-magnitude quake injured dozens of people and damaged hundreds of homes in the same area.

Officials and seismologists said that quake, on September 21, was the strongest to strike the country in 30 years.

There were no immediate reports of injuries or structural damage.

Albania’s Health Ministry said that at least 18 people died in the quake that hit capital Tirana and the surrounding region, causing buildings to collapse and burying residents under rubble.

More than 600 have been injured after the strong earthquake rocked the country earlier today.

The US Geological Survey said the magnitude 6.4 quake struck 19 miles northwest of Tirana.

Two women were found in the rubble of an apartment building in the northern village of Thumane, and a man died in the town of Kurbin after panicking and jumping out of a building, a Defence Ministry spokeswoman said.

The bodies of three other victims were pulled from the wreckage of two collapsed buildings in Durres, the defence ministry said.

Emergency workers told local media one of those killed was an elderly woman who had managed to save her grandson by cradling him with her body.

Unverified video footage posted on social media showed what appeared to be a collapsed building in Durres, 25 miles west of Tirana, on the Adriatic coast.

Author, critic and broadcaster Clive James passes away at the age of 80

Seismologist Branko Dragicevic in Serbia said this morning’s quake was felt by some 10 million people in Montenegro, Italy, North Macedonia, Greece and Bulgaria.

In Croatia, seismologists say the quake was mostly felt along the country’s Adriatic Sea coast, waking up people. There have been no reports of damage.

Several smaller tremors were recorded in the hour before the main quake, which was also even felt in the southern Italian region of Puglia. 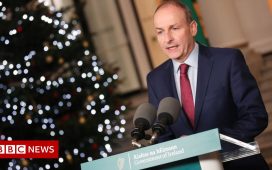