People are being warned not to drop their guard and meet indoors as England’s Covid lockdown eases further today.

Families and friends can now gather in groups of six or two households outdoors, while team sports will also resume.

Today marks the second stage of the Government’s roadmap out of lockdown, after schools threw open their doors once again on March 8.

But Government officials are said to fear that the relaxing could see larger gatherings outdoors over the next few days, as temperatures climb to a year-high of 24C.

And there are also reportedly concerns that families could be tempted to get together indoors over the chillier Easter weekend, the Daily Telegraph reports.

An advertising blitz has been launched, reminding people of the extra risks posed by indoor gatherings.

GP Dr Hilary Jones MBE has reminded people to “take this next step safely” in a short advert by the Government, which will be broadcast on television, radio and online platforms over the coming weeks.

The short clip, which animates the spread of coronavirus particles between a group of friends meeting indoors compared with in their garden, will be shown for the first time on Monday at 7.15pm on ITV.

It also urges people to open windows to improve ventilation in their homes, and presents the Government’s new “Hands, Face, Space and Fresh Air” slogan.

This is because smaller droplets and aerosols containing the virus remain suspended in the air longer in enclosed spaces, making it more likely to be inhaled by others, experts have said.

England’s chief medical officer, Professor Chris Whitty, said although the number of coronavirus cases in the UK has been reduced during national lockdowns “thanks to the efforts of the public”, it is “very clear that outdoor spaces are safer than indoors”.

NHS psychologist Laverne Antrobus advised planning meetings carefully to ensure that no more than six people are involved and resisting peer pressure to break the rules.

Boris Johnson said he hopes the easing will “kick-start a Great British summer of sport” as sports stars teamed up with the Government to encourage a return to physical activity.

Football and cricket pitches, tennis and basketball courts, outdoor swimming pools, golf courses and sailing clubs are now free to reopen after months of being shuttered.

Organised team sports can also resume outdoors, meaning grassroots competitions can resume ahead of the Easter break without the need for social distancing.

The easing came as official figures showed more than 30 million people in the UK have received a first vaccine dose, accounting for about 57% of all adults.

The Prime Minister said: “I know how much people have missed the camaraderie and competition of organised sport, and how difficult it has been to restrict physical activities – especially for children.

“But we must remain cautious, with cases rising across Europe and new variants threatening our vaccine rollout. Despite today’s easements, everyone must continue to stick to the rules, remember hands, face, space, and come forward for a vaccine when called.”

Mr Johnson has warned that a spike in cases could be seen as parts of Europe are struck by a third wave of infections but hopes the vaccine roll-out will suppress hospitalisations and deaths.

The Prime Minister has sought to lose weight after his own hospitalisation with Covid-19 and the Government is now calling for the public to participate in a fitness drive, with children recommended to aim for an hour of physical activity a day, and adults for at least 150 minutes.

England World Cup-winning cricket captain Eoin Morgan said: “With summer – and the cricket season – just around the corner, there’s no better time for everyone, young and old, to get back to having fun by getting outdoors, being active and playing sport.”

British number one women’s tennis player Johanna Konta said: “I’m so happy people in England are now able to get back on court and enjoy the mental and physical health benefits of tennis.”

England Rugby Union prop Kyle Sinckler added: “I can’t wait to see you guys get out there, and all the kids getting back out there to enjoy themselves.”

In Wales, the “stay local” order ended on Saturday and people were allowed to stay in self-contained holiday accommodation.

The stay home order in Scotland is to end on Friday, while in Northern Ireland up to six people, or two households, will be able to meet outdoors from Thursday.

While greater outdoor freedoms are now permitted, the Government is still advising people to work from home where possible and minimise the number of journeys they take.

The next step in the roadmap to easing the lockdown is April 12, which is earmarked for non-essential shops to reopen and for outdoor hospitality, including pubs and restaurants. 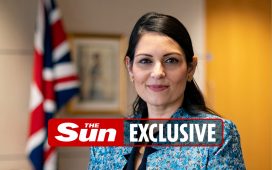