Lagos PDP Publicity Secretary Taofik Gani said in a statement that Fayose will be declared a persona non grata in the activities of the chapter, unless he desists from offering divisive advice.

He said PDP should regard Fayose as a jester because the candidates he had dismissed in recent times, including Senator Biodun Olujimk and Edo State Governor Godwin Obaseki, later triumphed at the polls.

Gani described the former governor as a confusionist and agent provocateur in politics, adding that his activities are inimical to the advancement of Southwest PDP.

He said Fayose is “Indeed a disgrace and negative role model to the younger ones”.

Gani stressed: “We are nearing very important elections in the state to take us into winning Lagos State in 2023 general elections. We need all togetherness and complementary efforts of the old, young, male, female.

“It is thus shocking that a supposed leader would come to our state to ‘tear’ us apart rather than give positive and progressive uniting advice to us. We will hold Fayose responsible for any future election loss in Lagos State and indeed the SouthWest.” 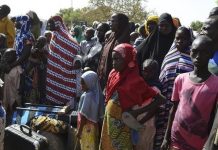 Muslims, Christians fast, pray for end to insurgency in Borno

#EndSARS: The generation that said ‘enough’