Father of 3-year-old UK boy charged in apparent acid attack, due in court with 5 other suspects


The father of a 3-year-old British boy, who suffered serious burns to his face in arm in an apparent acid attack, has been charged in the incident and was due in court Tuesday along with five other men.

The man, 39, who wasn’t identified, and five others were charged with conspiracy to commit grievous bodily harm after the substance was thrown on the child inside a Home Bargains store in July.

The child was discharged from the hospital days after suffering the burns, but police said the long-term prognosis of his injuries is not yet known.

The use of corrosive liquids, which leave victims gruesomely disfigured with life-altering injuries, has grown in popularity the last few years.

British police have reported seeing an increase in acid attacks during the last year, but it is very rare for a victim to be so young. Some attacks are related to gang fights or late-night bar confrontations.

Robin Walker, the Worcester representative in Parliament, said lawmakers are considering toughening sentences for people convicted of any type of intentional assault with acid.

He described what happened to the 3-year-old boy as “horrific.”

Fox News’ Lucia I. Suarez Sang contributed to this report. 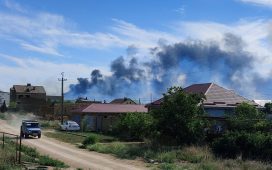