By Chris Pleasance and Will Stewart In Moscow for MailOnline

A series of powerful explosions have rocked a munitions depot in Russia as more than 1,000 people were evacuated from nearby villages.

Fireballs and a thick plume of smoke could be seen rising from an artillery arms depot in the Ryazan region, 115 miles south of Moscow, on Wednesday – which the military said were caused by wildfires igniting the base.

Fourteen nearby villages were ordered to evacuated, along with 1,600 residents including at least 148 children. 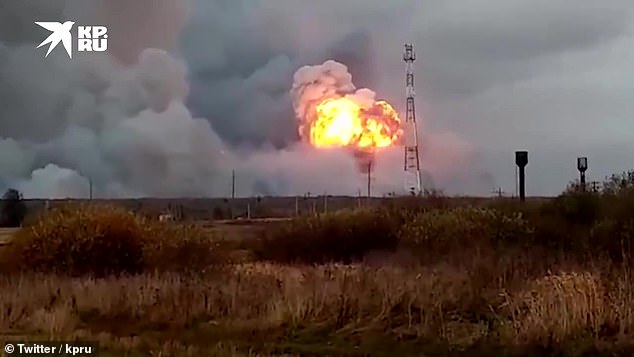 Ten villages in Ryazan district, south of Moscow, have been evacuated after multiple explosions at a Russian arms dump that the military said was sparked by wildfires 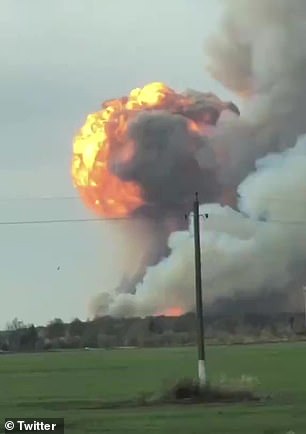 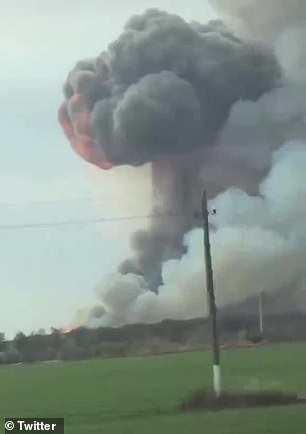 Fireballs could be seen rising into the sky over the base, as Russian media said rounds were exploding at the artillery depot every five to ten seconds

Rounds could be heard detonating once every five to ten seconds, Russian news agencies said, while videos showed several large fireballs rising into the sky.

A thick plume of smoke could also been seen streaming from the depot, accompanied by smaller flashes closer to the ground.

A spokesman said a grass fire started near the artillery depot around 1.10pm before ‘gusty winds’ spread it to woodlands and then the base itself.

The fire brigade was called and entered the base along with a military unit, but failed to extinguish the flames.

All personnel have now been evacuated, and there are no reports of casualties, the spokesman added.

A hundred firefighters are now being scrambled back to the base, while an Il-76 tanker plane and military helicopters have been put on standby.

Evgeny Zinichev, Russia’s minister of emergencies, is also being flown to the area along with military specialists. 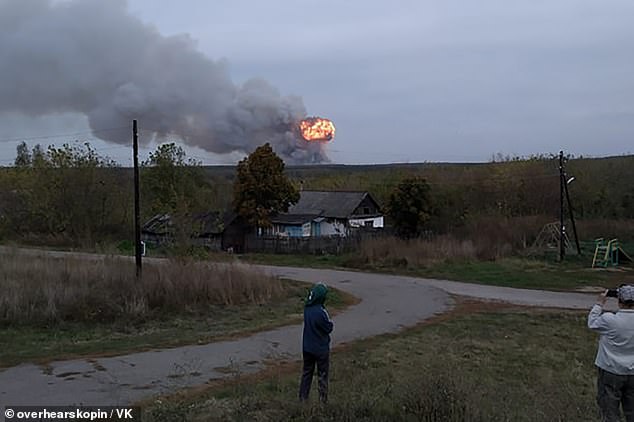 The military said a grass fire spread to woodlands around the base, then engulfed the base itself, causing a series of large blasts 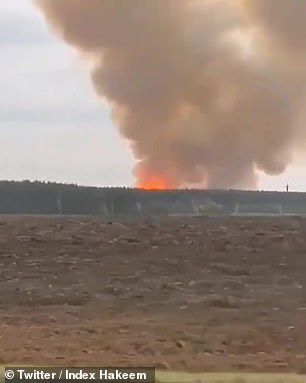 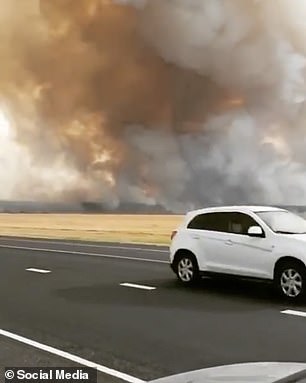 Witnesses said ash and shrapnel was falling from the sky, as the military also closed a nearby highway to prevent anyone being injured

Witnesses said shrapnel and ash could be seen falling from the sky, and that four large explosions took place within the first hour of the fire taking hold.

The villages of Shelemikhino and Zheltukhino were feared to have been damaged by the blasts, which shook the windows of homes several miles away.

The damage was also feared to have spread to the village of Kuzminka-2, though the Defense Ministry insisted there was no danger to other settlements.

The Emergencies Ministry said a motorway was also being closed down to prevent passing motorists from being injured.

Fires and explosions at ammunition depots have plagued the Russian army for years and drawn criticism of lax safety standards.

Woman critical after falling 30 metres from showground ride in Cairns

Cameroon: Children killed in attack on school in Kumba

Julie Bishop's 'hipster' innovation hub out of fashion at Dfat