Scientists from NASA and the European Space Agency will meet in Rome, Italy, next week to discuss progress on the development of an asteroid deflection system.

The joint mission, the first launch for which is slated for 2022, will test whether it is possible to deflect an asteroid’s orbit in a predictable way.

One spacecraft will impact the asteroid, while another will be sent to assess the effects of the collision so that the technique can be refined.

If the mission is a success, this asteroid deflecting principle could one day be used to protect the earth from a catastrophic impact event. 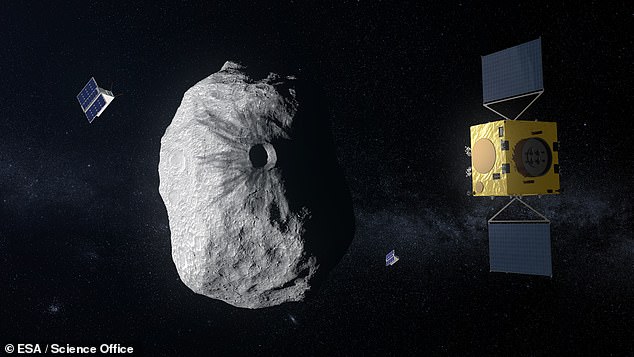 Scientists from NASA and the European Space Agency will meet in Rome, Italy, next week to discuss progress on the development of an asteroid deflection system

Experts from around the globe will attend the International Asteroid Impact Deflection Assessment Workshop, which is taking place between September 11–13.

The conference venue is the Aula Ottagona in Rome’s Baths of Emperor Diocletian, which was converted into a planetarium during the last century.

Attendees from the two space agencies will be discussing the planned joint mission to deflect the obit of the smaller of the Didymos asteroids that orbit between the Earth and Mars.

First, the asteroid will be impacted by a NASA spacecraft called DART — or ‘Double Asteroid Impact Test’ — which will travel at around 4.1 miles (6.6 kilometres) per second.

The second spacecraft, ESA’s Hera, will then survey the DART’s crash site and gather data on the effects of the collision on the asteroid’s trajectory, which could then be used to refine the deflection technique in case of a real asteroid threat.

‘It is vital that Europe plays a leading role in the Asteroid Impact Deflection Assessment, an innovative mission originally developed through ESA research back in 2003,’ said Ian Carnelli of the ESA.

‘An international effort is the appropriate way forward — planetary defence is in everyone’s interest.’

NASA’s DART spacecraft is already under construction, with a launch planned for the summer of 2021 with the aim of reaching the asteroid target in September 2022.

The spacecraft will be accompanied on its mission by a tiny, additional satellite known as LICIACube — the Light Italian CubeSat for Imaging of Asteroids — which will record the moment that DART strikes the asteroid.

After this, Hera will play its part. The craft will assess, for example, the shape of the resultant crater and the mass of the asteroid post-collision.

Hera will also be deploying two CubeSats which will conduct close-up surveys of Didymos, along with a radar probe — the first-ever to be undertaken of an asteroid.

The ESA craft is presently in its final design phase, with European space ministers expected to decide whether to green-light construction of the vehicle during the Space19+ Ministerial Conference in Madrid, Spain, in November 2019.

If approved, Hera will form part of the ESA’s proposed new Space Safety Programme and will likely launch in the October of 2024, taking two years to travel to Didymos. 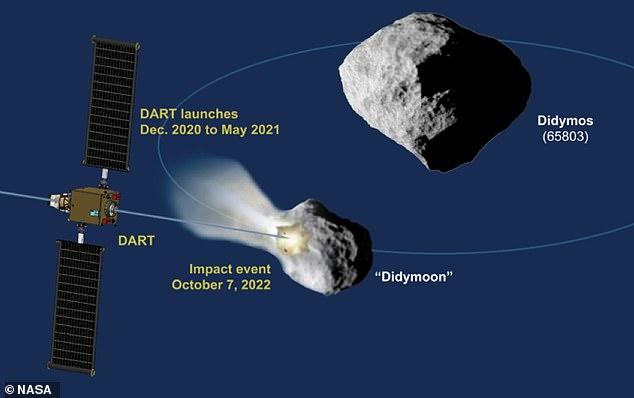 The joint mission, the first launch for which is slated for 2022, will test whether it is possible to deflect an asteroid’s orbit in a predictable way

At the conference, participants will be discussing not only the progress of the craft involved in the deflection mission, but also results from astronomical observations of the Didymos asteroids.

Didymos was chosen for this experiment because the binary asteroid system — with its 525 feet (160 metre) -wide moon and 2559 feet (780 metre) -wide main body — involves relatively small masses and gravities.

As a result, the smaller body orbits at the low velocity of a few centimetres per second — meaning that the moon’s orbit can feasibly be shifted in a meaningful way.

The same would not be possible, for example, with a single asteroid orbiting around a star.

One spacecraft will impact the asteroid (pictured, in this artist’s impression), while another will be sent to assess the effects of the collision so that the technique can be refined 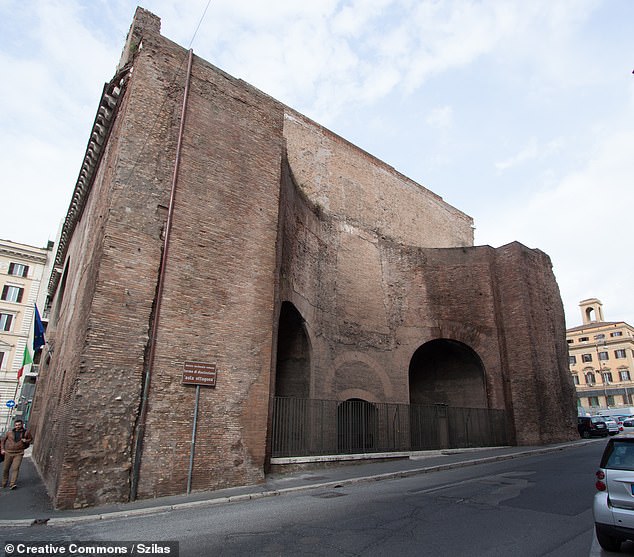 Experts from around the globe will attend the International Asteroid Impact Deflection Assessment Workshop, which is taking place between September 11–13. The conference venue is the Aula Ottagona in Rome’s Baths of Emperor Diocletian, pictured

‘DART can perform its mission without Hera – the effect of its impact on the asteroid’s orbit will be measurable using Earth ground-based observatories alone,’ said Mr Carnelli.

‘But flying the two missions together will greatly magnify their overall knowledge return. Hera will in fact gather essential data to turn this one-off experiment into an asteroid deflection technique applicable to other asteroids.’

‘Hera will also be the first mission to rendezvous with a binary asteroid system, a mysterious class of object believed to make up around 15% of all known asteroids.’

‘Our mission will test a variety of important new technologies, including deep space CubeSats, inter-satellite links and autonomous image-based navigation techniques, while also providing us with valuable experience of low-gravity operations.’

IS EARTH DUE FOR A MAJOR ASTEROID IMPACT?

Researchers have discovered most of the asteroids that are about a kilometers in size, but are now on the hunt for those that are about 140m – as they could cause catastrophic damage.

Although nobody knows when the next big impact will occur, scientists have found themselves under pressure to predict – and intercept – its arrival.

‘Sooner or later we will get… a minor or major impact,’ said Rolf Densing, who heads the European Space Operations Centre (ESOC) in Darmstadt, ahead of International Asteroid Day on Friday.

It may not happen in our lifetime, he said, but ‘the risk that Earth will get hit in a devastating event one day is very high.’

For now, there is little we can do.

And yet, the first-ever mission to crash a probe into a small space rock to alter its trajectory suffered a major setback when European ministers declined in December to fund part of the project.

‘We are not ready to defend ourselves’ against an Earth-bound object, said Densing. ‘We have no active planetary defense measures.’