Headteachers in England have expressed anger after an exam board mistakenly sent out a late-night email giving schools less than 48 hours to provide evidence to support teacher-assessed grades.

After months of intense efforts to assess pupils and submit GCSE and A-level grades for last week’s deadline, schools received an email from the AQA board at around 10pm on Monday requesting samples of pupils’ work within the time limit.

After an anxious night, many school leaders rushed in to try to submit the required evidence, only to find they could not access the portal to submit work, putting further pressure on staff, headteachers said.

Although schools have been warned that they will be required to send samples of a small number of pupils’ work within a tight timeframe as a quality assurance measure for this year’s assessments, many heads are angry about the additional burden of work falling on teachers, and the late-night email only added to their frustration.

Mark Tilling, the headteacher of High Tunstall College of Science in Hartlepool, told the Guardian: “At 9.51pm last night we received an email asking for samples to be sent within 48 hours. It upsets people. Teachers are shattered. I’ve paid £75,000 for our exams this year and we’ve done all of the work.”

Ben Davis, the headteacher at St Ambrose Barlow RC high school in Wardley, Greater Manchester, said he received his email at 10.10pm, “after what has already been a protracted process fraught with difficulties as a result of poor guidance”.

“This is happening at the same time as rates are over 300 [per 100,000 of the population] here. We have over 200 pupils in isolation, several staff out and 19 cases since last Wednesday.”

An AQA spokesperson said: “As with other exam boards, it took longer than expected to know which students and subjects to request evidence for. This meant that we weren’t able to email schools until much later on Monday than we’d hoped – and our emails included an incorrect deadline of 10am on Wednesday.

“We’re really sorry for this and we’ve been back in touch with schools this morning to confirm that they have until Thursday morning to submit their evidence.”

Geoff Barton, the general secretary of the Association of School and College Leaders, said: “Yesterday’s confusion is the last thing that schools and colleges needed after they have already had to manage the massive task of assessing students and submitting grades. We will be writing to AQA to express our disappointment that this happened.” 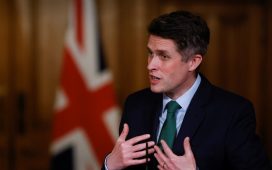