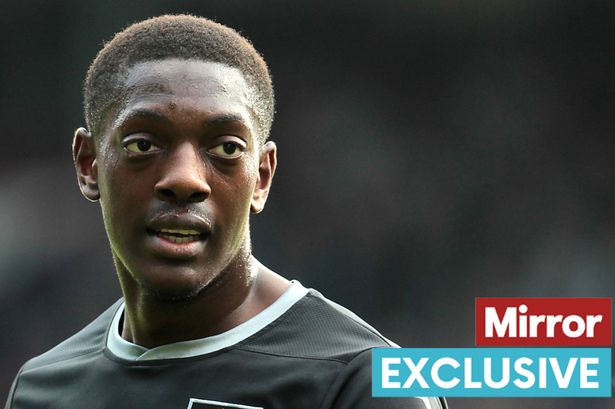 A former Premier League footballer who quit aged 28 after being bombarded with sickening racist abuse has warned giving bigots a “free hit” could lead to a player taking their own life.

Marvin Sordell says he has no regrets about walking away from his dream profession – and said he was unsurprised after research by The Mirror found just a tiny fraction of people who post racist messages are charged or arrested.

During his career the ex-England under-21 international, who represented Team GB at the 2012 Olympics, frequently received hateful messages from complete strangers – many using their real names, confident they would not face any consequences.

This took a huge toll on himself and his family, and Sordell believes lack of enforcement means racists have become more brazen knowing the risk of punishment is low.

He said this could lead to a tragedy if it is not addressed, stating: “We shouldn’t have to wait until it happens until we act.”

In just two years the number of allegations of social media racism to 23 police forces in England and Wales soared by 144 per cent, with 1,394 in 2020 alone.

Figures released by 10 forces – the Met, Northumbria, Staffordshire, Surrey, Humberside Lincolnshire, Norfolk, Leicestershire, Cambridgeshire and Cleveland – show they had only charged 41 people between 2018 and 2020 despite hundreds of complaints.

Sordell, now 30, said: “It’s pretty clear to see that people can make whatever comments they want because they know that the likelihood of them being a) found and b) charged are very rare.

“If you think about the number of cases where people have faced consequences, you could probably Google them and name them all, which is pretty telling considering how much abuse is sent.”

In August the former Watford, Burnley and Bolton striker told a select committee of MPs that dealing with racism directed at players is not being treated as a priority.

“I’ve been racially abused, I’ve had death threats, I’ve had threats of different kinds,” he told The Mirror.

“At times it can be easier to deal with than others. One of the things that gets forgotten is that we all have families and friends who are on social media and they see it as well.

“Having to navigate that isn’t necessarily always taken into account. People see finances as a protection against reality, but it’s not, reality is reality.”

He echoed a warning by former England star Anton Ferdinand, who warned that abuse could lead to a player taking their own life.

“People don’t take into account how traumatic being on the end of any kind of abuse, particularly racist abuse, is – it’s not something that should be taken lightly,” Sordell said.

“When you say someone might take their own life, some might say it’s not that serious, but that’s always the case. We shouldn’t have to wait until it happens until we act.”

The former Premier League star, who now runs a production company and works as a public speaker and writer, has done a lot of advocacy work around mental health, having struggled with depression for many years.

He said that educating offenders should be a key element of tackling online abuse.

“Racism has been in football for as long as I’ve known, and as long as the previous generation have known, but it’s found a new medium,” he said.

“We talk about kicking racism out, but all we’ve done is moved it to a different place.”

Sordell believes social networks need to step up and work with authorities to ensure those who post racist and abusive messages are punished.

“The fact is that every social media company has the IP address even without having the data on the individuals they know where they are,” he said.

“They have that capability.”

Nevertheless the former striker said he would receive hateful messages from accounts with people’s real names on them.

“It’s an alarm bell of where we are,” he stated. “It shows people feel like it’s fine to do so, they don’t feel like they’re going to be punished.”

He believes every social network should verify those who set up an account, even if their real name is not visible on their profile.

Sordell said: “If I reported them to the police, the police should be able to find out who they are. The issue isn’t me being able to see their name, it’s about them being held to account.”

But Sordell said it is far too early to tell if this will cause a lasting impact.

Earlier this year fellow former Premier League star Anton Ferdinand told a Parliamentary select committee: “My worry is what are the social media companies waiting for? Are they waiting for a high-profile footballer to kill themselves, or a member of their family to commit suicide.

The 36-year-old added that companies should use technology to identify inappropriate tweets before they are sent out, and talked about the need for an account owner’s identity to be known, at least to the companies themselves.

“They don’t want to implement technology because if I retweet a racist tweet that has been put my way, the frenzy around it is monetary to them,” he said.

The Mirror sent a list of questions to Facebook, asking for a breakdown of the number of racism complaints it had received, and the number of times it had provided details to police.

The network says it is being proactive, removing more than 33 million pieces of hate speech content, 93 per cent before they were reported, and says incidents have falling slightly in the first three months of the year.

It says it responds to “valid legal requests for information” from police, and is working with police chiefs to improve co-operation.

“We respond to valid legal requests for information as quickly as possible, and are confident that the information we provide is helpful to police investigations.

“We also encourage people to turn on Hidden Words, a tool which means no one has to see abuse in their comments or DMs. No one thing will fix this challenge overnight, but we’re committed to keeping our community safe from abuse.”

Twitter has rules in place to address threats of violence, abuse and harassment and stressed it takes action when it finds accounts that violate them.

However the spokesperson added that technology alone isn’t enough to solve the issue so they work with other organsiations to tackle racism and regularly meet with the Met Police.

Anyone who wants to report violations can do so here https://help.twitter.com/en/forms/law-enforcement