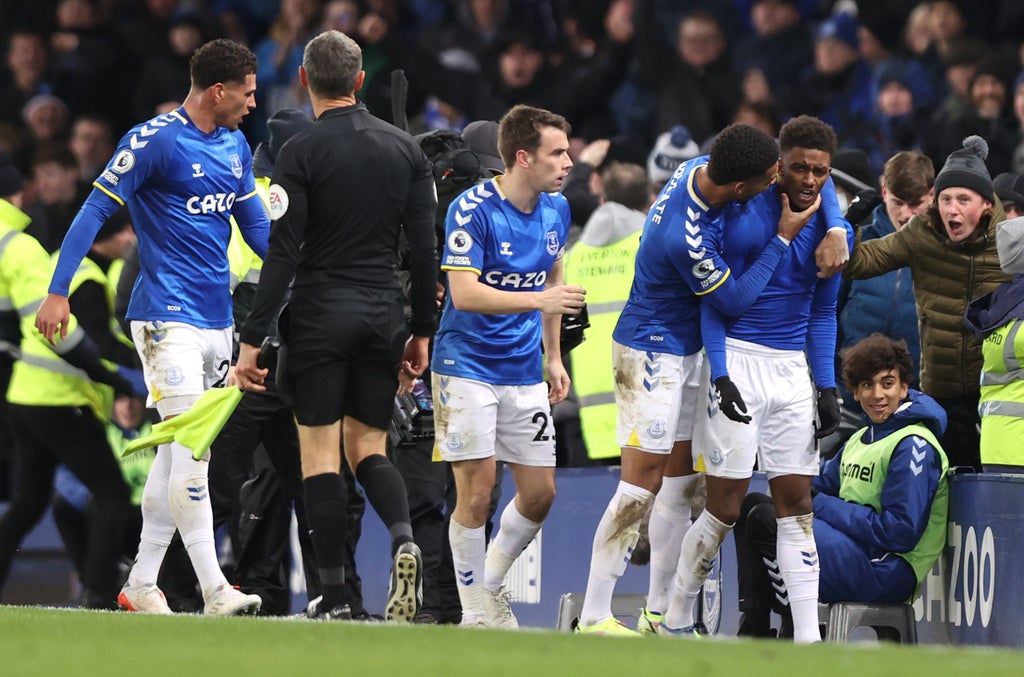 Arsenal travel to Everton on Monday night in the Premier League looking to bounce back after last week’s setback at Manchester United.

The Gunners went down 3-2 at Old Trafford, while Rafael Benitez’s Toffees are also aiming to kick-start their form heading into the festive period.

Everton were thrashed 4-1 by Liverpool last week, heightening the pressure on Benitez, while director of football Marcel Brands was dismissed ahead of tonight’s game.

With West Ham’s win over Chelsea and three points for Tottenham and Manchester United last weekend, Mikel Arteta knows a win is key to reestablish their top four hopes and victory will take them to within a point of the Hammers and up to fifth. While Everton are now just five points off the drop zone, though a win will take them up to 12th.

Follow live score and goal updates from Goodison Park, including analysis and reaction from Monday Night Football, PLUS the FA Cup third round draw:

Only Roberto Firmino (70) and Gabriel Jesus (52) have more Premier League goals among Brazilians than Richarlison (41, now level with Philippe Coutinho).

Demarai Gray’s goal is the latest winning goal Everton have scored for six years in the Premier League.

A penny for his thoughts?

Everton’s eight game run without a win has ended! Second half goals from Richarlison and Demarai Gray rescued them from a fourth consecutive league defeat and a vital three points has propelled them up the Premier League table.

Everton are up to 12th and Arsenal fail to move back into the top five. They remain in seventh place.

90+8 mins: Everton win! It’s a result they very much needed and what a comeback from the Toffees. Demarai Gray is the hero of the hour with his 92nd minute winner.

90+6 mins: Chance! An Everton clearance sends Richarlison one-on-one with Ben White and he holds the ball up long enough for Alex Iwobi to drive into the box. Richarlison feeds him a pass and Iwobi gets charged down by Ramsdale. He gets a shot off by the Arsenal goalkeeper manages to keep it out!

90+4 mins: The Everton fans are in full voice now. It’s a sickening goal for Arsenal to concede, Aaron Ramsdale could do nothing about it at all and it’s going to mean the Gunners have lost their last three away games in a row.

90+2 mins: TURNAROUND! What a beauty of a goal this one is. Andre Gomes sparks Everton into life again with a driving run up the midfield before slotting it out to Demarai Gray on the left wing. He brings the ball inside, checks away from one defender, then another and finally blasts a rocket into the far top corner! Everton have the lead with four minutes to play!