The EU’s greenhouse gas emissions fell by nearly 4% in 2019, data from Europe’s environmental watchdog has shown, as countries met online for the first time for UN climate negotiations.

The fall of 3.8% for EU member states in 2019 brought EU emissions to 24% below 1990 levels – or 26% if carbon sinks are taken into account – according to the European Environment Agency.

The EU’s target is for a 55% cut in greenhouse gas emissions by 2030, compared with 1990 levels and including carbon sinks, so if similar cuts can be continued for the next decade then the bloc is likely to meet its goals. The UK has its own targets, of a 68% reduction in emissions by 2030 and a 78% cut by 2035.

The EEA said about 80% of the EU’s reduction in emissions in 2019 was from the heat and power sector. But the EU’s emissions from transport have continued to rise, meaning new policies and investment are likely to be needed to meet the bloc’s future emissions targets.

Campaigners have said the EU’s CO2 goals are not stretching enough, though member states argue they are tougher than most other countries.

Lorelei Limousin, climate and transport campaigner at Greenpeace, said: “Europe must rapidly phase out fossil fuels and produce vastly more of its energy from renewable sources like wind and solar power. But Europe also has to consume much less energy overall, including in the transport sector where emissions are actually increasing.

“The EU needs to transform transport. Internal combustion engines, aviation subsidies and short-haul flights should all be phased out. Europe needs a shift from air and road travel to rail wherever possible, and to increase access to public transport for all.”

The confirmation of the EU’s emissions fall came as nations embarked on three weeks of online UN climate negotiations, to prepare for the crunch Cop26 climate talks later this year. Cop26 will be held in Glasgow this November, postponed from last year because of the Covid-19 pandemic.

In normal years, the UN convenes two weeks of preparatory talks at its climate headquarters in Bonn, about six months before each climate Cop (conference of the parties). This year, Covid-related travel restrictions mean the talks are taking place online for the first time, and have been expanded to three weeks.

There have been months of discussion over whether and how some of the negotiations necessary for a successful Cop26 can take place online. Developing countries are particularly concerned, as many have limited communications and staff capacity to undertake complex negotiations virtually.

They are also keen that their agreement to conduct some negotiations online should not be taken as a sign that Cop26 itself can take place virtually, as many are adamant that the talks must take place in person. The UK, as host nation, has sought to reassure developing countries on this score, pledging to explore vaccinations and testing to ensure the talks can take place in person. The preparatory talks will not have full formal status, as any decisions made will have to be formally confirmed at a later date.

Patricia Espinosa, the UN’s top climate official, said the preparatory talks were vital to sort out some of the remaining sticking points in the “Paris rulebook”, a set of technical agreements necessary to bring the 2015 Paris accord into full operation. One of these sticking points, known as Article 6, concerns the workings of CO2 markets, and a failure to agree on it disrupted the last UN climate talks, held in Madrid in 2019.

See also  The Guardian view on the vaccine rollout: the state we're in | Editorial

Espinosa said: “It’s time to wrap up outstanding negotiations and implement the Paris agreement. Time is running out for the world to achieve the goals of the Paris agreement. Unleashing its full potential will not only address climate change but help the world build forward from Covid-19 and drive the transformation towards a cleaner, greener and more sustainable future.”

Although no breakthrough is expected in the three weeks of preparatory talks, observers will be watching keenly for signs of progress, or of discord among nations that could presage a difficult passage to Cop26 in November. If the talks go well, nations can move on from some of the more bureaucratic aspects to talks of greater substance.

Most major countries have now signed up to a long term target of reaching net zero emissions around mid-century. More important, however, are plans to curb greenhouse gas emissions this decade, in line with scientific advice that found global carbon must be halved by 2030 to keep the world within a 1.5C (2.7F) rise in temperatures, above pre-industrial levels.

These plans, called nationally determined contributions, are the bedrock of the Paris accord, but current NDCS are still inadequate to meet the Paris goals.

Developed countries must also come up with billions more in financial assistance to the poor world, to help poor countries cut greenhouse gases and cope with the impacts of climate breakdown, if Cop26 is to be a success. 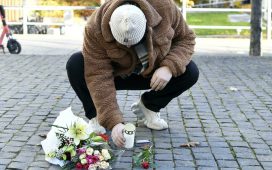 ‘You are a monument’: EU leaders hail Angela Merkel at ‘final’ summit