UK and European gas prices surged almost 18 per cent on Monday after Russia’s Gazprom damped hopes for additional supplies next month, despite hints from President Vladimir Putin that more could be forthcoming.

A keenly awaited pipeline capacity auction held on Monday, which traders were watching for evidence of increased supplies, showed no increase from Russia either through the Ukrainian pipeline or lines passing through Poland to north-west Europe.

“[The auction results were] identical to last month, so expect flat flows for November,” said Tom Marzec-Manser at ICIS, a consultancy.

The European gas benchmark contract for November delivery jumped 17.7 per cent to €104 per megawatt hour, while the equivalent UK contract jumped more than 15 per cent to £2.71 per therm.

Putin and Kremlin officials have hinted in recent weeks that more gas could be delivered to Europe as it wrestles with a record-breaking surge in gas prices that has threatened the economic recovery from the pandemic.

Russia has been accused of withholding supplies to bolster support for accelerating the start up of the Nord Stream 2 pipeline that will bypass Ukraine to deliver gas directly to Germany through the Baltic Sea. 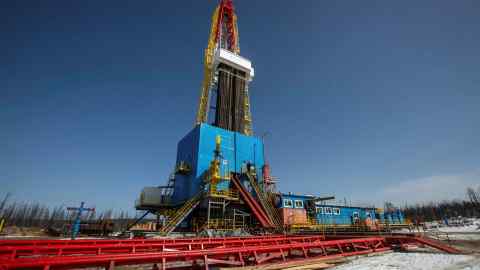 Accusations that Gazprom was using energy as a “weapon” to speed up approval of Nord Stream 2 were “politically motivated blather”, he said, though he conceded that approving the new pipeline could ease the energy shortfall in the EU.

Continental Europe gets more than a third of its total gas supplies from Gazprom, but a long 2020-21 winter has drained storage facilities in both Russia and the EU to low levels.

Russia’s deputy energy minister Evgeny Grabchak said last week that Gazprom would continue filling domestic storage facilities until November 1, in an earlier sign that Russia was in no rush to divert more supplies to Europe.

At the same time more demand for liquefied natural gas in Asia has increased global competition for LNG cargoes, making it more difficult and expensive for the UK and EU countries to compensate for Russia’s reluctance to fill the gap. The UK imported almost 20 per cent of its gas in 2019 through LNG shipments.

Ofgem blamed for errors that led to energy firms collapsing

The Guardian view on green finance: doing business as if the planet mattered | Editorial