European Union citizens are being sent to immigration removal centres and held in airport detention rooms as the UK government’s hostile environment falls on them after Brexit, according to campaigners and travellers interviewed by the Guardian.

Europeans with job interviews are among those being denied entry and locked up. They have spoken of being subjected to the traumatic and humiliating experience of expulsion, despite Home Office rules that explicitly allow non-visa holders to attend interviews.

Confusion about whether EU citizens can explore the UK job market and then go home with an offer in order to apply for a work visa has added to the growing number of detentions.
In other cases, visitors are clearly breaking rules which, for example, now bar EU citizens from taking up unpaid internships.

Some were sent two hours’ drive away to Yarl’s Wood detention centre in Bedford, where a Covid scare meant they were confined to their rooms.

Other countries whose citizens have been held at a UK airport or detention centre include Italy, France, Bulgaria and Greece. It is understood one French man was held at Edinburgh airport for 48 hours recently while the Bulgarian ambassador to the UK confirmed a number of his nationals had been held at immigration removal centres.

The two Spanish women were detained at Gatwick on 2 and 3 February after arriving on separate flights from Valencia and Bilbao.

María, aged 25, from Valencia, said that – like many of those detained – she thought she was free to explore the job market at least until October, especially since she had lived and worked in the UK before.

María said that when Border Force officials at Gatwick said they would expel her, she offered to pay for a flight home the same day. Instead, she was sent to Yarl’s Wood, where she spent three anxious days. “I’m still in shock,” she said.

When the Guardian first spoke to María on Friday she was at Yarl’s Wood and scared that she had been exposed to Covid. Later that day she was released and ordered to quarantine at her sister’s home in Bexleyheath, near London, until 17 February. Border Force officials kept her passport.

“So much time is being wasted,” she said. “The worst thing was that no one at Yarl’s Wood could tell me what was going to happen. My freedom had been taken away and I couldn’t get legal advice.”

Eugenia, a 24-year-old woman from the Basque region of northern Spain, reached Gatwick on Sunday 2 February on a flight from Bilbao. She planned to look for a job offer, go home to apply for a visa and then return to live with her Spanish boyfriend – an NHS worker who has been in the United Kingdom for four years. “I had a return ticket and had filled out an online travel form in which I explained all that,” she said.

At Gatwick, Eugenia had her mobile phone taken away and was locked into a holding room for 24 hours, sleeping on a fold-out bed with half-a-dozen others. Then she was put on a flight to Barcelona along with another Spanish woman who had arrived for a job interview.

Between them, María and Eugenia (who asked that their real names not be used) said they met a dozen other European citizens detained for similar reasons, accounting for half of the people in Gatwick’s detention rooms. They included two Spaniards with job interviews, a Frenchwoman with an internship and a Czech woman who had flown in from Mexico and was being sent back there.

“The Czech girl was desperate,” explained Eugenia, who spent part of her 24 hours locked up in tears. “Like me, she knew we couldn’t start work immediately, but understood that you could look for jobs and come back to the UK later after obtaining a visa. When she offered to pay for a flight back to Prague, they said no – that they were expelling her to Mexico.”

Other travellers with Italian, Portuguese and eastern European passports were also being expelled.

Luke Piper, a former immigration solicitor who now works for The3Million campaign group that monitors the post-Brexit treatment of EU citizens in the UK, said rules were confusing and accused Border Force of being overly aggressive. “There is absolutely no need to send someone to Yarl’s Wood if they can stay with family until the expulsion,” he said.

Eugenia said she was told that her airline, Vueling, was to blame. “We had all read the website and filled out the forms. Then they tell you that it is all the fault of the airline, which shouldn’t have let us board.”

Vueling denied airlines were meant to vet EU travellers. “It is officials in the country of destination who establish and enforce entry requirements,” spokesperson Tania Galesi said.

Eugenia said cabin staff on her return flight had seen several similar cases recently. Frontier police who met them at Barcelona confirmed this. “They didn’t understand why it was happening. British citizens entering Spain are not treated that way.”

Eugenia says the experience was so traumatic that she has given up on trying to live with her boyfriend. “I’m not going back,” she said. “I don’t want to go through that again. The idea of moving to Britain appals me.”

The Home Office claimed the new rules were clear and could be easily checked online. “We require evidence of an individual’s right to live and work in the UK,” a spokeswoman said. Yet Home Office advice explicitly states that visitors without work visas may “attend meetings, conferences, seminars, interviews” and “negotiate and sign deals and contracts”.

“The Home Office need to explain why exploring the job market or attending an interview justifies refusing EEA nationals entry at the border when immigration rules specifically allow visitors to (among other things) attend meetings, conferences and interviews,” she said. “It seems to be detaining people despite being unclear of its own position. This is yet another illustration of the normalisation of immigration detention in the UK and the Home Office’s disdain for the right to liberty.”

Detainees complained that they were not informed of their right to seek legal assistance. María only learned about the Yarl’s Wood Covid scare from her sister, who was barred from visiting because of it. The Home Office denied there had been an “outbreak”.

Spanish officials said they were monitoring the situation and a European Commission spokesperson said it was concerned about “the conditions and duration of retention” while adding that only a “small number of EU citizens” seemed to have been affected so far.

The Bulgarian ambassador to the UK, Marin Raykov, confirmed that his consulate had dealt with “several cases, when a return flight was not available within 24 hours the arrival time … several Bulgarian citizens were detained at an immigration removal centre”.

He said citizens needed to be given a chance to contact the embassy. “The embassy expects to be promptly notified by the Home Office/Border Force regarding the temporary detention … so consular officials may provide them with the necessary advice, inform their relatives in Bulgaria (if necessary), as well as assist in arranging their speedy return to Bulgaria.”

The Home Office has not released data on border detentions since Brexit came into force in January and it remains unclear how many of those detained have been able, or willing, to contact their consulates.

‘Americans are heaven for us’: a surge in US visitors throws Greece a lifeline 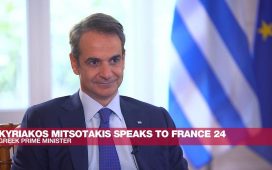 UK must honour its word over Brexit, says Emmanuel Macron