The intimate photos captured every moment of Erin’s Nashville nuptials, from the moment she shared her first kiss with Simon to her walk down the aisle with father David Foster.

‘I got to marry the love of my life, and hopefully will never have to look at a seating chart again for as long as I shall live,’ Erin, 37, wrote as she posted the photos to her Instagram account on Thursday. 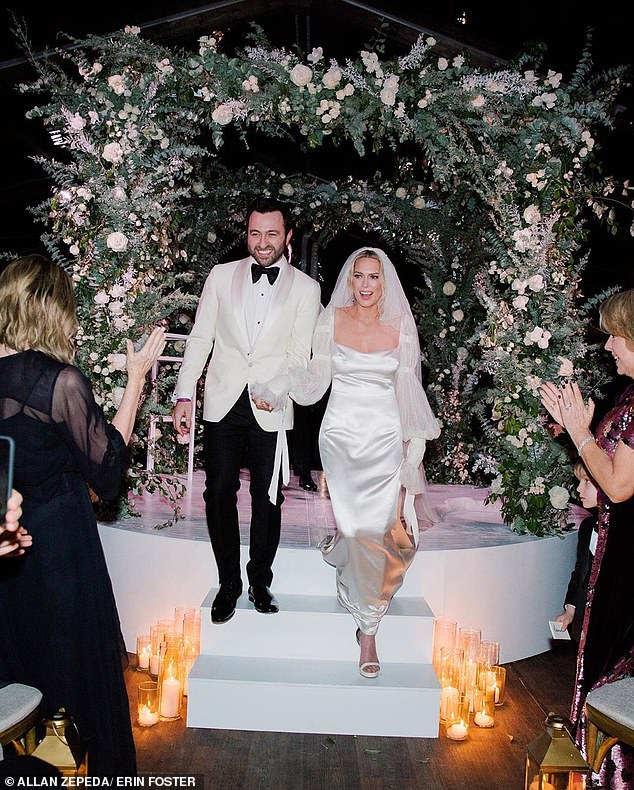 The couple were married beneath an elaborate floral chuppah surrounded by candles.

The bride carried a bouquet of white roses as she was walked down by her proud father David.

Erin looked incredible in a resplendent white Danielle Frankel gown with long puffy sleeves, while her husband wore a coordinating jacket with black slacks and bowtie.

The newlyweds were the picture of bliss as they began to walk down the aisle as man and wife, holding hands. 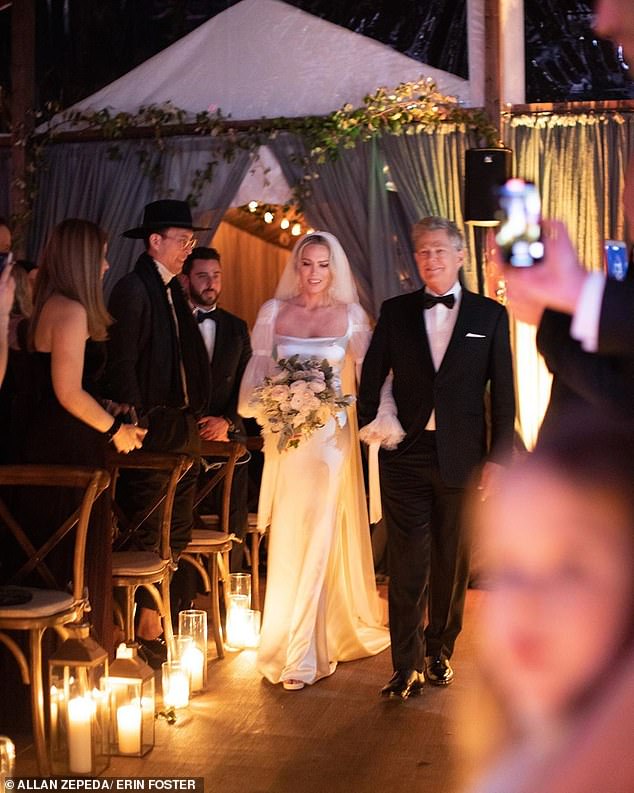 Here comes the bride: David Foster couldn’t have looked any prouder as he walked his daughter down the aisle 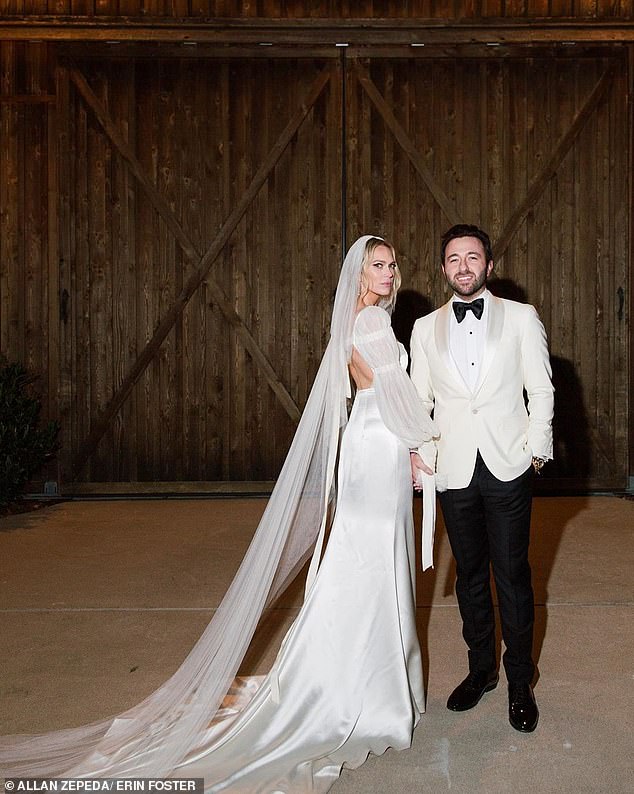 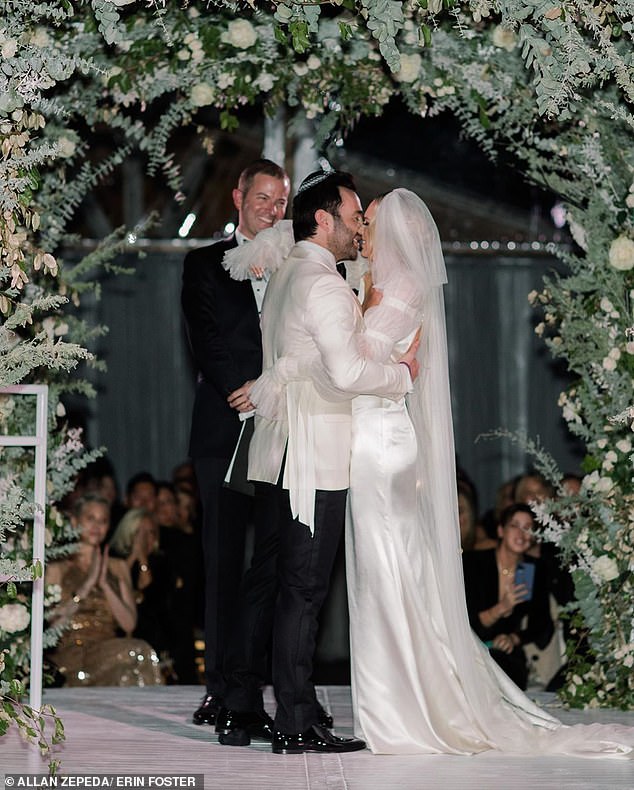 Kiss her! The couple shared their first kiss as husband and wife

The reception proved to be just as lavish.

Erin wore a second wedding dress for the party, changing into a mini dress with long sheer skirt and matching jacket.

The bride and groom smiled with delight as they were hoisted onto chairs as part of the traditional Hora dance. 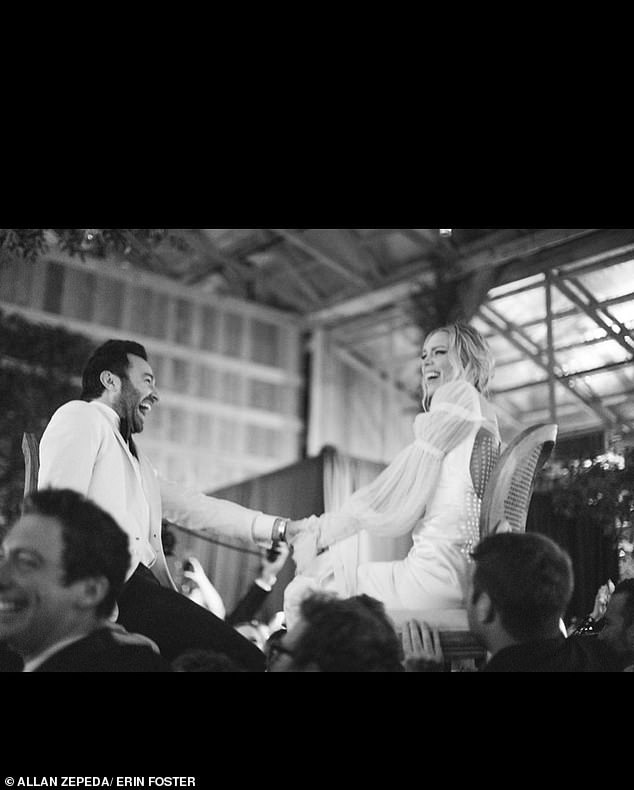 Let’s party! The bride and groom smiled with delight as they were hoisted onto chairs as part of the traditional Hora dance 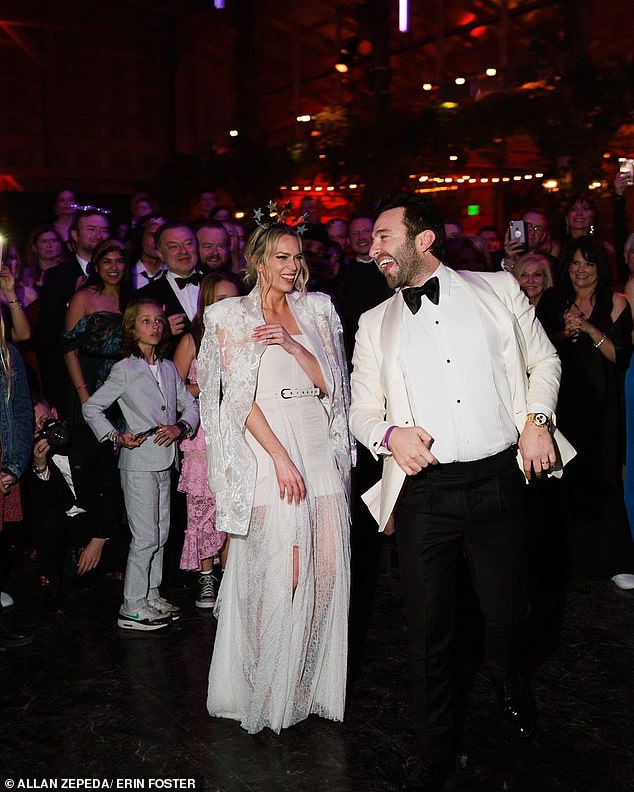 Whirlwind: The couple had been engaged for only four months before tying the knot in Nashville 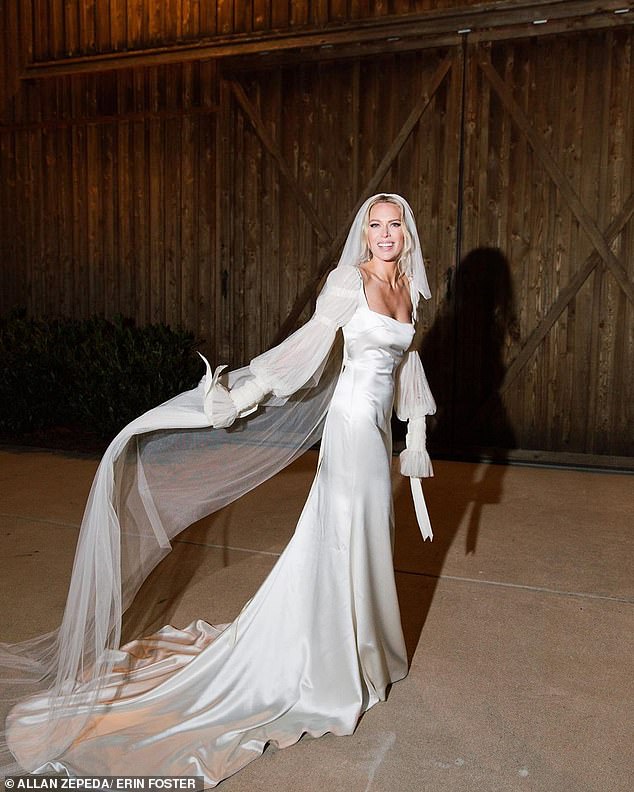 All dressed in white! Foster looked like a princess playing with her long veil

Everyone seemed to be having the time of their lives celebrating the newlyweds and the new year.

The festivities even included a performance of the song Proud Mary from father of the bride David and his new wife, Katharine McPhee. 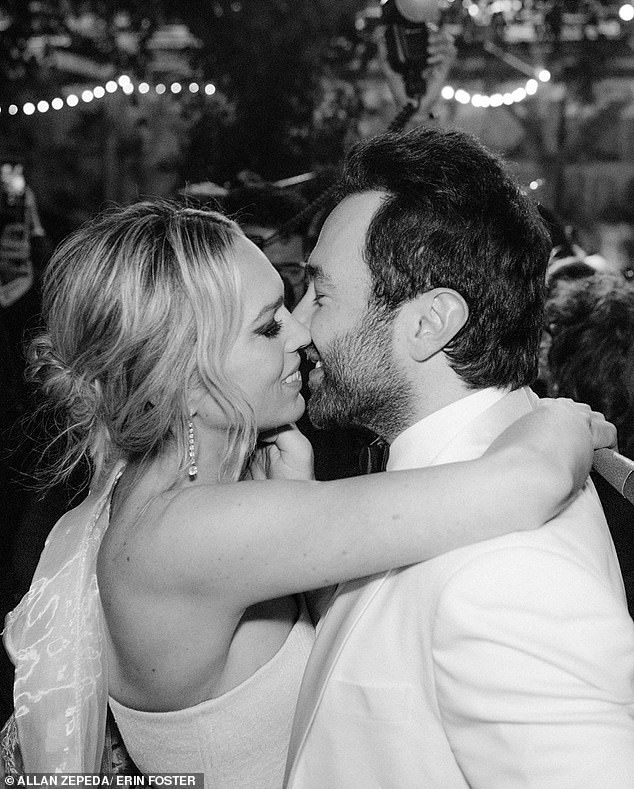 New Year’s kiss: The couple got hitched on New Year’s Eve in Nashville 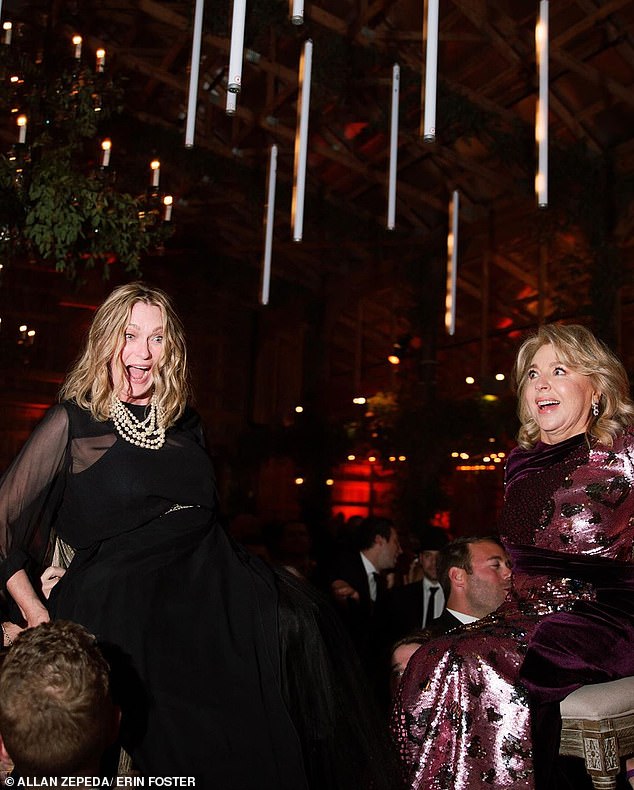 Hey now! Guests were hoisted onto chairs during the reception

Here comes the bride: Foster wore a stunning silky gown for her wedding to Sim Tikhman in Nashville on New Year’s Eve 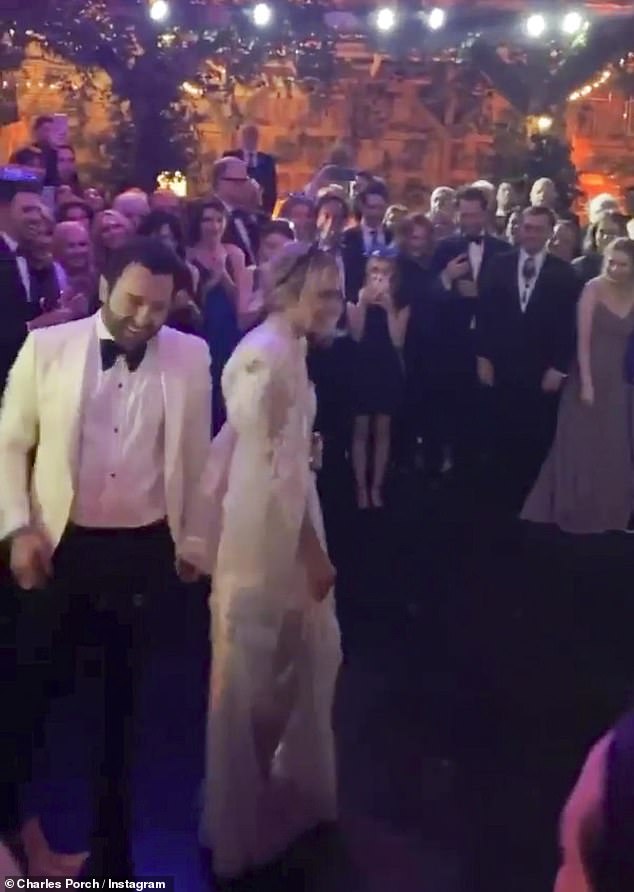 They’re married! The two tied the knot on New Year’s Eve in Nashville, Tennessee surrounded by their friends and family. They are pictured above arriving at their wedding reception 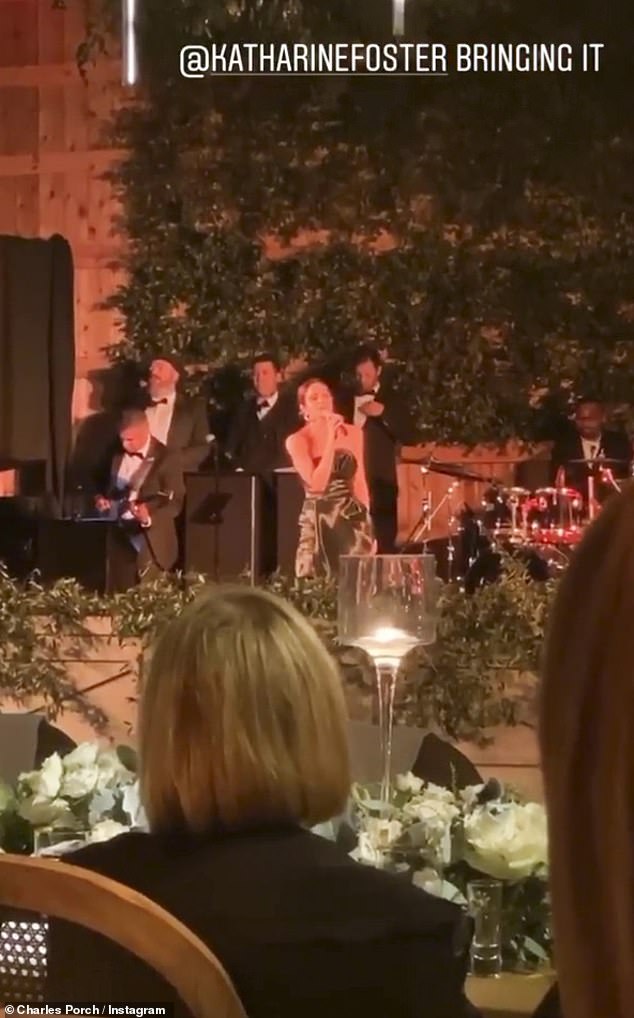 Bringing it: Erin’s father David Foster performed Proud Mary with his wife Katharine McPhee (pictured with the band) during the reception as a special gift to the couple

Erin and Simon had been engaged for only four months before getting hitched on New Year’s Eve in Nashville.

At the time of the proposal, the bride’s sister couldn’t wait to share the news and posted a photo of Erin with her new bling after the big engagement.

‘Ladies, I guess the moral of the story is stay crazy because apparently it gets you a ring. @erinfoster,’ she wrote in the post. 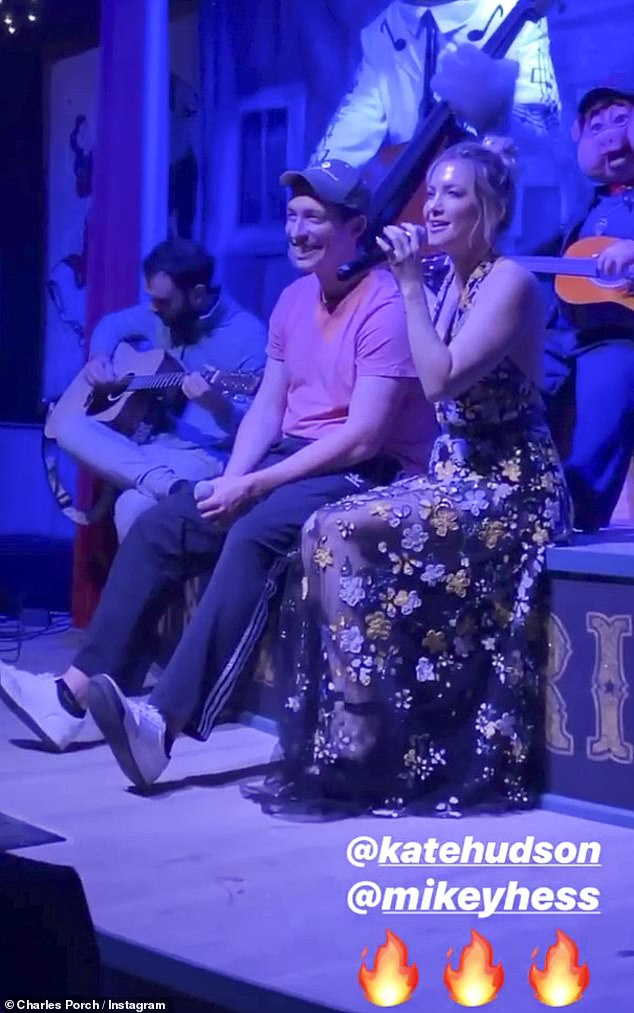 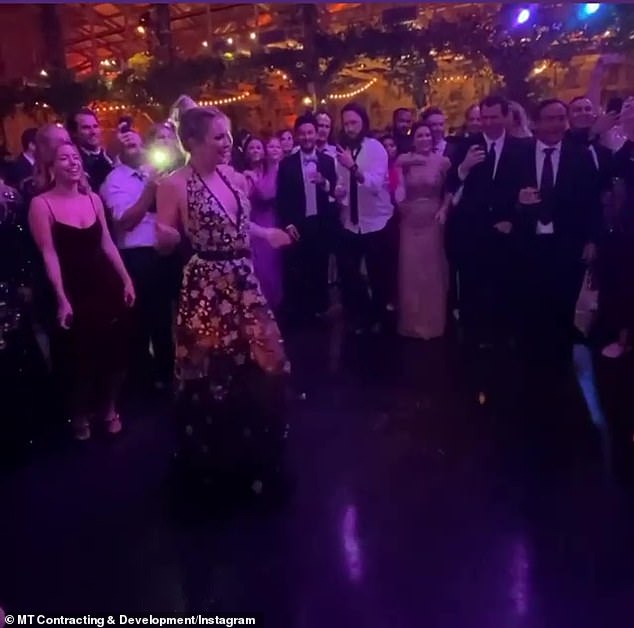 Party time: Kate Hudson took to the dance floor to celebrate the newlyweds

The television personality also shared her own post as she stood there looking shocked after the proposal: ‘How on earth did I pull this off.’

Back in August, Simon planned an elaborate day to surprise his lady love with picture perfect proposal complete with a stunning diamond ring.

The 36-year-old writer thought she was going to a friends wedding renewal party in Napa Valley, but was caught completely off guard when she found out it was all an elaborate ruse to surprise her with the perfect proposal. 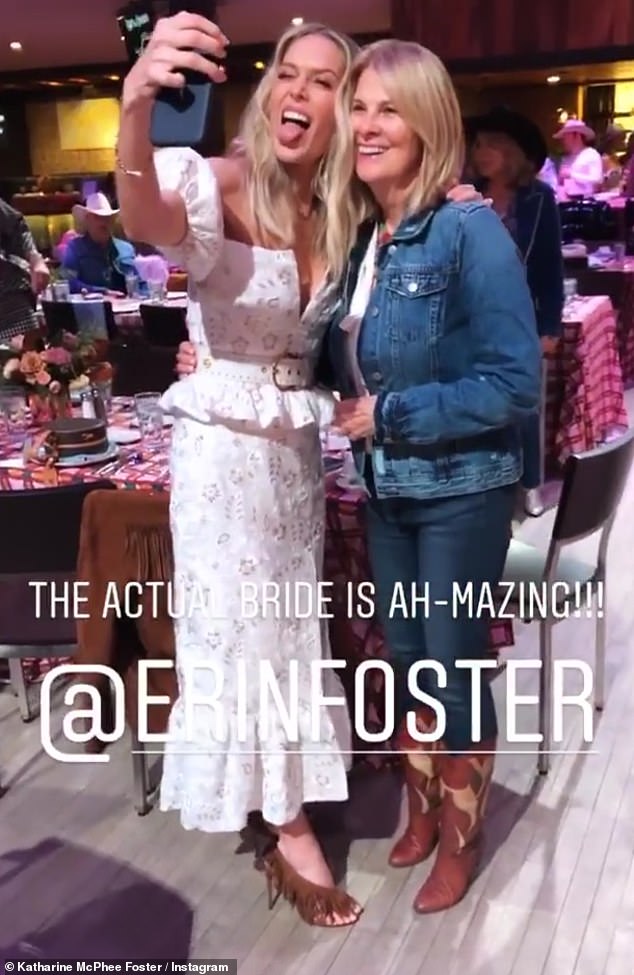 It’s country: Erin had fun posing for pictures with her friend’s and family during the country-themed rehearsal dinner 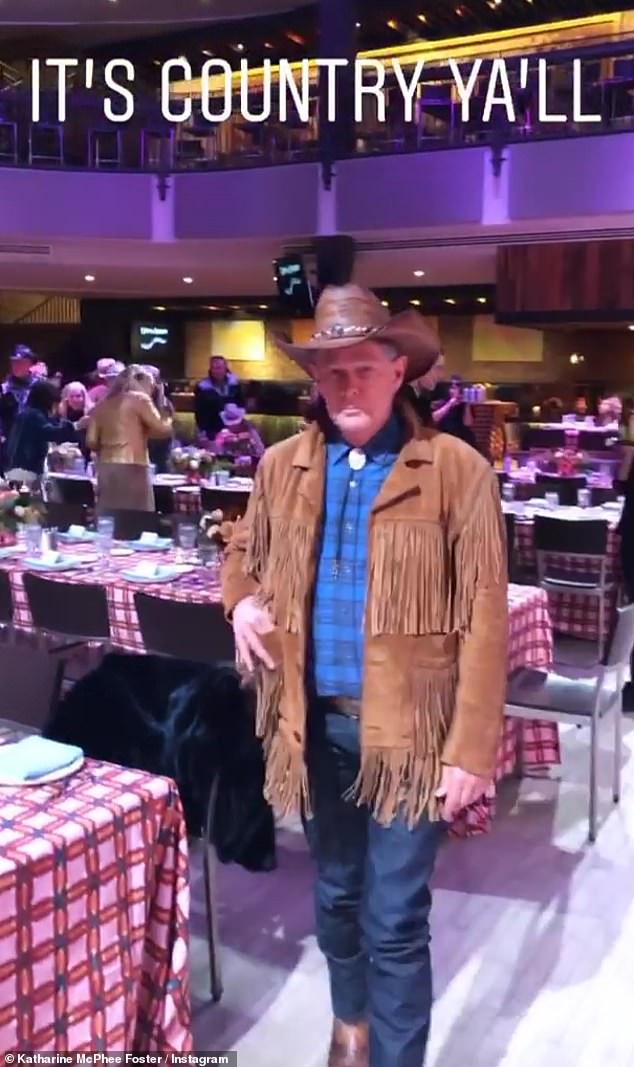 The father: Father of the Bride David Foster dressed in a fancy get-up for the rehearsal dinner 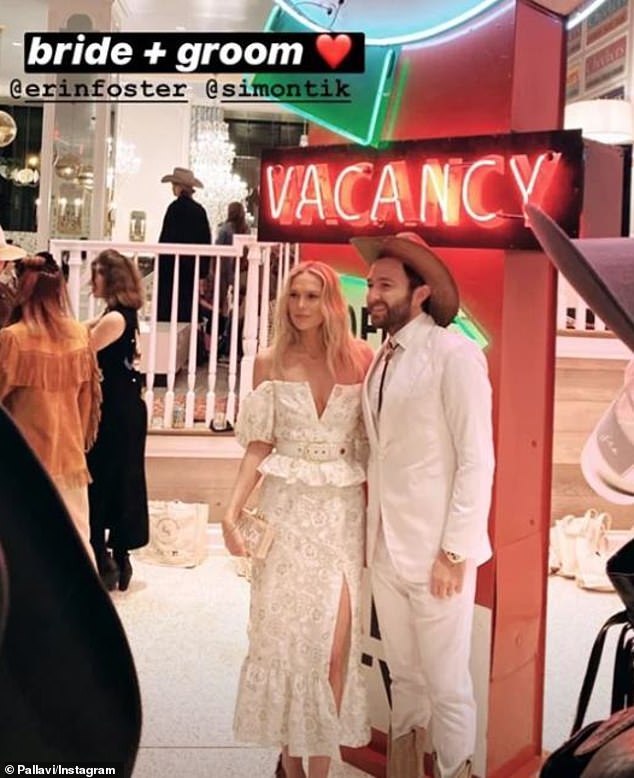 Erin had no clue that her sister Sara, stepmom Katharine and father David were hiding while they toured the gorgeous Napa Valley Reserve.

‘When we got there, there were balloons and signs for this fake ass wedding,’ she wrote. ‘We walked in to the most beautiful place I’ve ever seen.’

Despite all signs pointing toward a romantic moment for the pair, Erin had no idea what was going on. 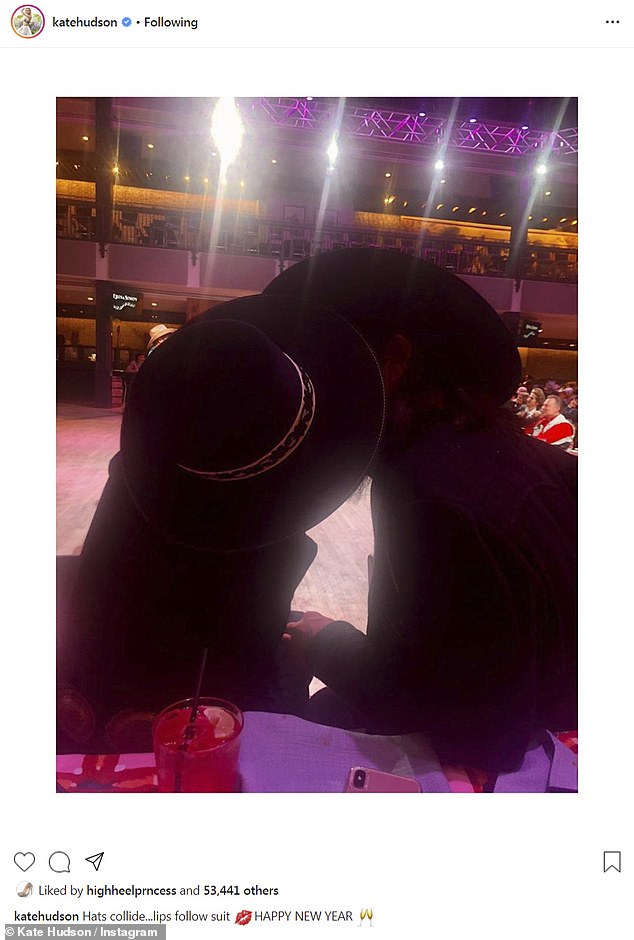 Guests: Kate Hudson and Danny Fujikawa share a smooch while at the rehearsal dinner for the happy couple 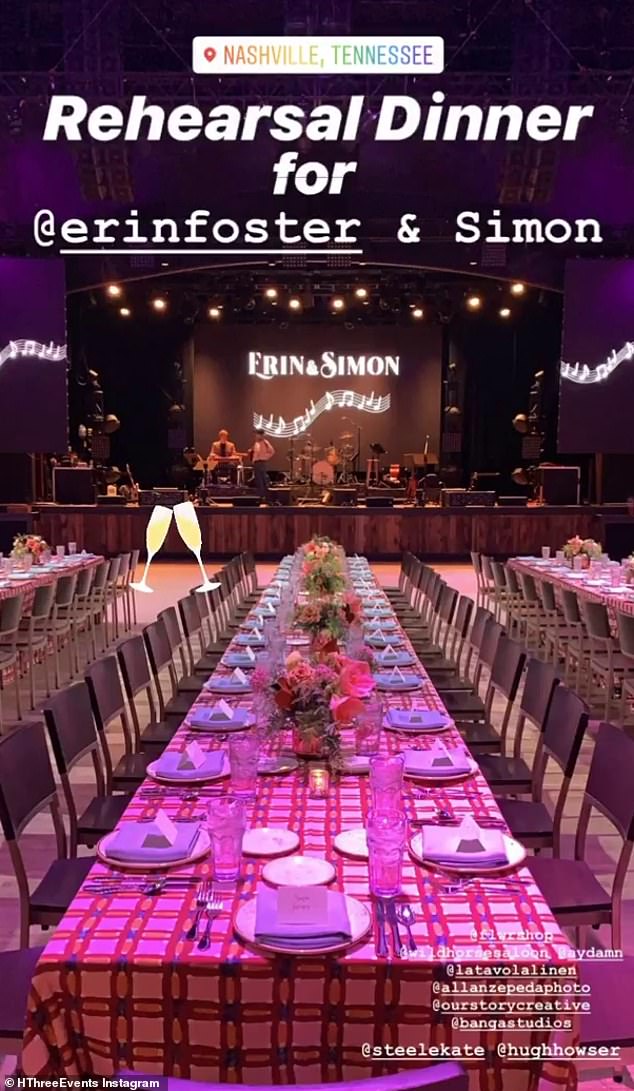 The rehearsal: One guest shared this photo of the lavish set up with rows of tables and a stage for the live band during the rehearsal dinner

‘Nothing has remotely dawned on me at this point,’ she wrote. ‘I’m definitely not as bright as i thought.’

Simon dropped down to one knee and asked Erin to be his wife with an incredible diamond ring made by jeweler Martin Katz, all of which was documented by a perfectly placed photographer.

‘I was in shock,’ she said as their families came running out to surprise Erin. ‘Every pic of me looks like this.’ 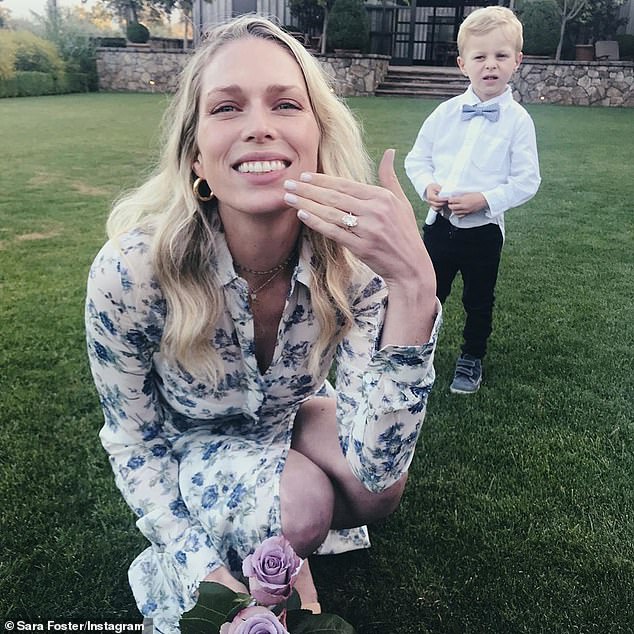 The big moment: Sara Foster shared this sweet Instagram picture after her sister got engaged while in Napa Valley 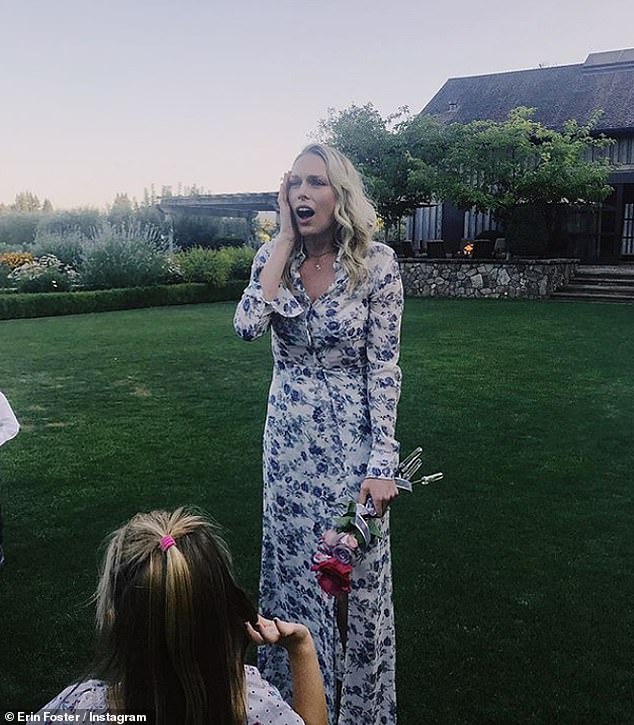