Nikol Pashinyan said the actions of Turkey and Azerbaijan in the disputed Nagorno-Karabakh region formed part of the continuation of Armenian genocide.

More than 300 have now died in the renewed fighting in and around the mountain enclave, which under international law belongs to Azerbaijan but is populated and governed by ethnic Armenians.

Azerbaijan says Azeri cities outside the conflict zone have also been attacked in the deadliest flare up in more than 25 years, taking the fighting closer to territory from which pipelines carry Azeri gas and oil to Europe.

‘What we are facing is an Azeri-Turkish international terroristic attack,’ Pashinyan said today.

‘To me there is no doubt that this is a policy of continuing the Armenian genocide and a policy of reinstating the Turkish empire.’

The Armenian genocide refers to the killing of 1.5 million Armenians by the Ottoman Empire from 1915 to 1923. 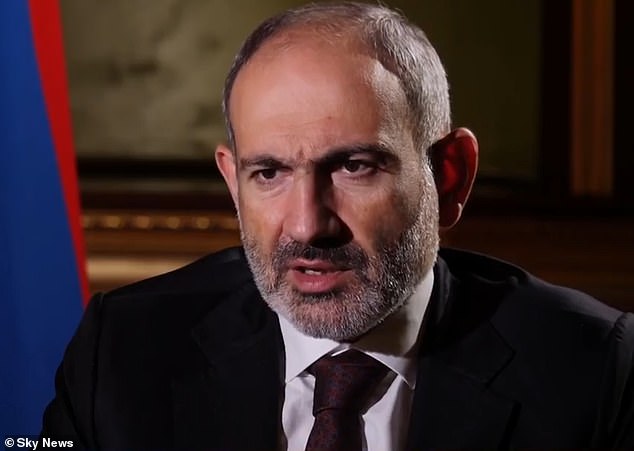 Armenian Prime Minister Nikol Pashinyan has accused Turkey of ‘international terrorism’ in its support for Azerbaijan in the ongoing Nagorno-Karabakh conflict. Pashinyan claimed Turkey had a policy of continuing the Armenian genocide and was trying to reinstate its empire 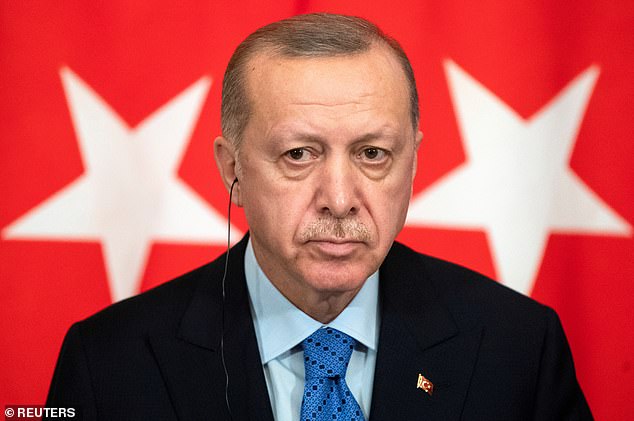 Turkey’s President Recep Tayyip Erdogan has changed the dynamic of the international response to the conflict by taking a more active role. Previously, Russia was the main player, which along with the UK, US and France, is a guarantor of the 1994 ceasefire between Armenia and Azerbaijan

Turkey accepts that many Armenians living in the Ottoman Empire were killed in clashes with Ottoman forces during World War One.

However, it contests the figures and denies that the killings were systematically orchestrated and constitute a genocide.

The fresh clashes between Armenia and Azerbaijan broke out on September 27, re-igniting a decades-old conflict between the ex-Soviet neighbours over Karabakh and drawing in powerful regional players Russia and Turkey.

Karabakh, a region within Azerbaijan, has been under the control of ethnic Armenians since a full-scale separatist conflict ended in 1994.

Some 30,000 people were killed and one million more displaced during that time.

Since the September flare up, neither side has shown any sign of backing down.

Both countries seem to be ignoring international calls for a ceasefire and a return to long-stalled negotiations on the region.

Pashinyan also accused Turkey of ‘encouraging and inciting’ the conflict in a recent interview with Sky News.

Prior to this most recent flare up, Russia was the main international force involved in the conflict but Turkey – which actively supports Azerbaijan and has a long history of bad blood with Armenia – has taken a greater interest.

On Wednesday, Iran, which neighbours both Armenia and Azerbaijan, warned that the fighting could trigger a regional war. 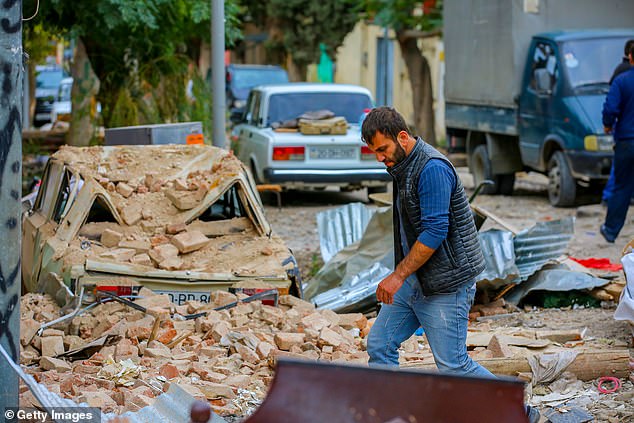 A man walks among debris from damaged buildings from recent shelling during a military conflict over the breakaway region of Nagorno-Karabakh, in the city of Ganja, Azerbaijan 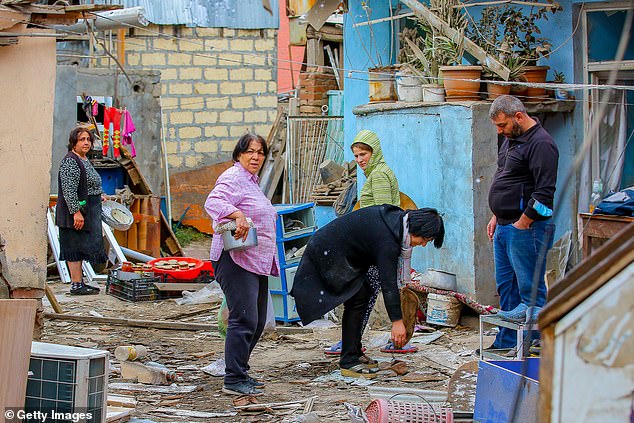 Shelling from the most recent flare-up has damaged buildings and killed civilians in the region. More than 300 people are reported to have been killed though the real number of deaths is thought to be higher

Pashinyan’s claims of ‘international terrorism’ relate to reports that Turkey has transported mercenaries from Syria to support Azerbaijan in the conflict.

The conflict over Nagorno-Karabakh dates back to the collapse of the Soviet Union in 1991, when long-simmering tensions between Christian Armenians and mostly muslim Azerbaijani’s boiled over as the republics became independent nations.

A 1994 cease-fire left Armenian and Azeri forces facing each other across a demilitarised zone, where clashes were frequently reported.

International mediation efforts have brought little visible progress since then.

The conflict has been an economic blow to the Caucasus region because it has hampered trade and prompted Turkey to close its border with Armenia. 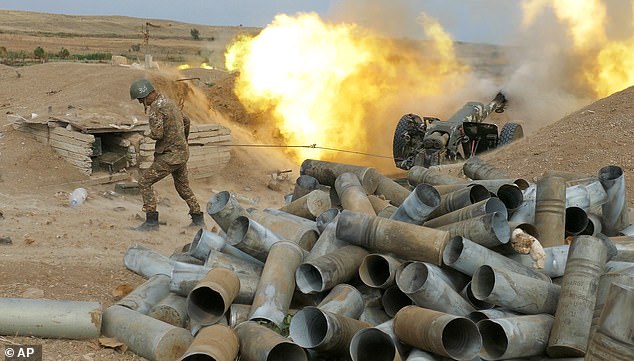 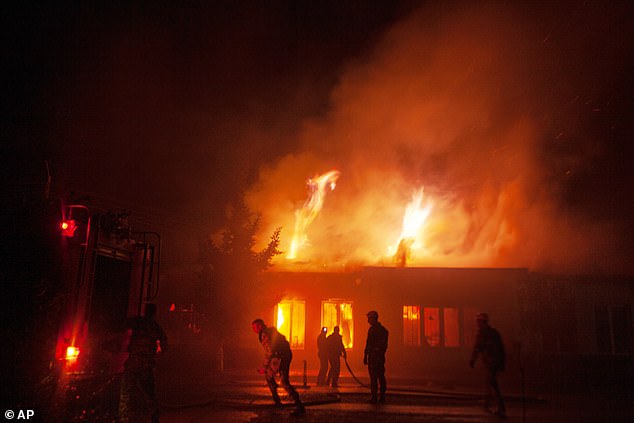 Karabakh, a region within Azerbaijan, has been under the control of ethnic Armenians since a full-scale separatist conflict ended in 1994. Each side blames the other for the inability to resolve the conflict in the region, which is within Azerbaijan

The clashes are often deadly, notably in 2016 and this July.

Since the new fighting erupted last month, dozens have been killed and wounded in apparent shelling by both sides.

Each country blames the other for the failure to resolve the conflict.

In addition to causing local casualties and damage, the conflict in the small, hard-to-reach region is also of concern to major regional players.

Russia is Armenia´s main economic partner and has a military base there, while Turkey has offered support to the Azeris, fellow Muslims and ethnic brethren to Turks.

Iran has been calling for calm.

Meanwhile, the United States, France and Russia are intended be guarantors of the long-stalled peace process, under the auspices of the Vienna-based Organization for Security and Cooperation in Europe.

The Turkish empire, more commonly known as the Ottoman Empire, was formed by tribes in Anatolia in 1299.

It eventually grew to become one of the most powerful states in the world during the 15th and 16th centuries.

The empire was characterised by territorial expansion and at its height encompassed most of southern Europe including present-day Hungary, Greece and the Balkans, as well as substantial portions of the Middle East and North Africa.

In the empire’s early days, Islamic Turkish warriors fought against Christian crusaders from Byzantium for political, religious and economic dominance in the region.

Its golden age came under the rule of Suleiman the Magnificent (1520-66) when most of its territory was amassed and at least 25 million people fell under Ottoman rule.

The Sultan is also notable for his reforms which increased the harmony between the empire’s secular and religious laws. 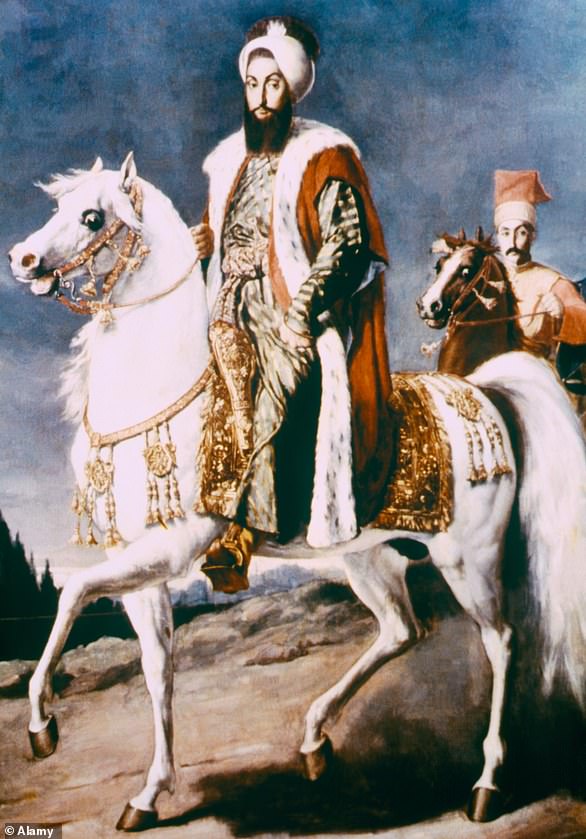 Suleiman the Magnificent was the longest-serving ruler in the history of the Ottoman Empire. He presided over a period of territorial expansion and reform

The Battle of Lepanto in 1571 dealt a hammer blow to the empire. It had lost almost its entire navy in the clash with the Holy League – a coalition of Christian states organised by the Pope – and centuries of decline followed the defeat.

More than 600 years after its founding, the Ottoman Empire came to an end in 1922 after the strains of the First World War and the Balkan Wars.

The modern Turkish Republic was founded a year later under Mustafa Kemal, better known as Ataturk.

In more recent times, current Turkish President Recep Tayyip Erdogan has been accused of sharing the expansionist policies of the Ottomans through foreign policy.

What was Rudy Giuliani doing in the Borat video?

Man camp: in the California desert, I tried to become a better man

‘I have to do this’: Myanmar garment workers forced into sex work by Covid